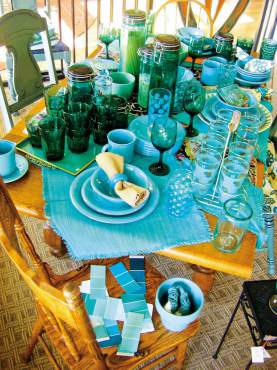 Studying the color aqua was like being on a trampoline with 8-year-olds at a family reunion picnic: wild, silly, unpredictable and lovingly memorable.

It is the chorus line headliner, the sleeping giant or the softest pillow. Aqua doesn’t steal the scene — it enables the production. Even the enunciation of the words — “aqua or turquoise”— is quirky to the ear.

Where does one begin?

Like the family dog — always there, friendly and loyal — the same could be said with the color aqua. The classic hue is everyone’s pal. The color adorns the Northwest Coast totem designs and Southwest’s old abode doors. Its definition would be bright yet it can often soften with the breath of a bird.

This color study had to take in a wide range. Is it aqua? Is it turquoise? Is it teal? Science took a backseat to perception, as exploration had to be a wide road to accommodate a bevy of cousins. 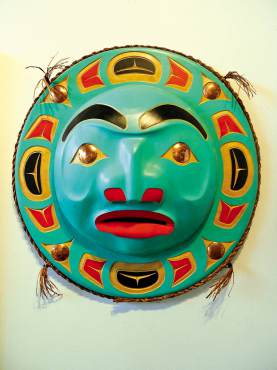 Past colors were much more obvious and definable; purple being bold and ego-centric, red fiery and worldly, blue dominant and controlling, green changeable and emotionally deep and yellow the little-bit-goes-a-long-ways creature. But aqua, my, oh my! How does one begin? 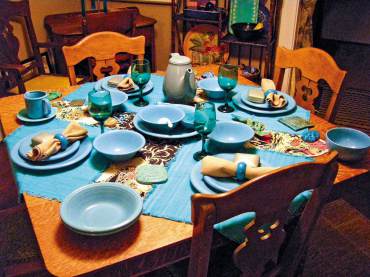 With past color studies, the first thing would be to buy a gallon of paint and begin painting everything in sight, so as to feel the emotional impact. But with aqua, been there done that. Aqua and its branches were common to my palette.

One thing I knew right off was that there was a teeter — a little more green added there, a little more blue added here, a smidgen of white or a dapple more of yellow. The wide play-range was accepted, yet knowing that moss-green went too far one way and robin’s egg blue went too far the other set a sort of boundary. 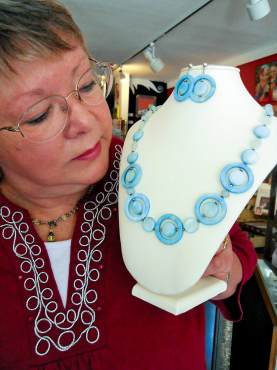 I did two things first: rounded up about 12 interior design magazines and brought out aqua dishes and linens.

Out of curiosity I plopped a pile of aqua ’70s Japan stoneware plates on the counter of a lime-green kitchen setting. The aqua and lime-green combo work well as textile patterns. But as two separate forces in one arena, they do not complement one another, as if competing for priority.

It also appeared that together they diminished or changed each other’s color impact. Aqua or turquoise appeared bluer next to its lime-green cousin.

Another aqua experiment began with a red-theme dinner party in a small sunroom setting. Yes, I had red plates but decided to use those bold aqua plates instead. The result was yummy and ecstatic. Red and aqua are good partners. 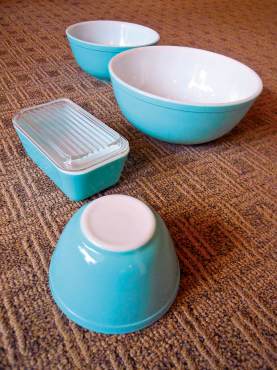 Then I took those same plates, added aqua dinner-table accessories and little aqua doodads and created a full-fledge table dinner setting for four on a square oak table. I tried adding smidgens of red, orange or yellow but quickly removed all other colors, for a full solo aqua force was most effective.

If I invited dinner guests (wearing aqua clothes) and served aqua food, it would become an art performance piece. In the past I have organized two of those performances with green and pink. But with aqua I cancelled the thought because where would one find aqua-color food?

This wasn’t your average color study. Dramatic measures were needed, even against the morays of purists who savor design publications. From my stacks of interior design magazines, I randomly pulled out a dozen or so and began ripping out any page that dealt with aqua. 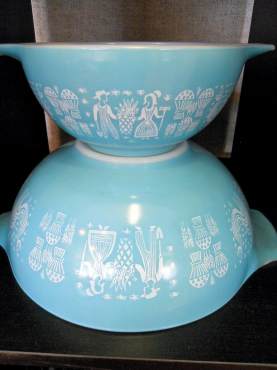 Tucson Home Magazine relishes its earthy reds and seldom displays that bright greeny-blue hue. Architectural Digest is too concerned with structure lines to introduce competitive features, unless that color feature is a directive to structure. House Beautiful, on the other hand, introduces aqua like clams to a beach.

In one magazine article an interior designer made reference to aqua being her favorite color when combined with the blues. I took note and experienced the same love affair when partnering aqua with cobalts and ultramarines.

The main thing out of the magazines was that aqua seems to be a very deliberate application, as even a turquoise throw pillow appears to be a long thought-out design placement.

For color opinions, I like to visit Dan McCraw at Scott McClendon’s Hardware in Belfair. He has been in the paint business for a long time, has worked with renowned artist Dale Chihuly and is familiar with color’s therapeutic cause and effect. 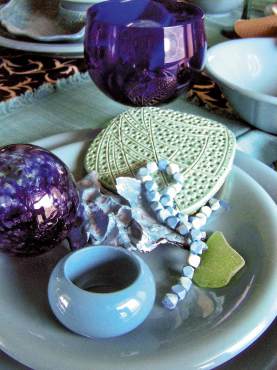 “Are people painting home interiors with aqua these days?” I asked, and the reply was an immediate “No!” followed by, “the exception of bathrooms having aquatic flavors.”

But the next day, in contrast, while talking to a tourist from Ohio, I brought up the color subject, asking, “Have you used aqua or turquoise in your home?”

The answer, a big “Yes!” — and that was a repeated story. But the painted wall applications were usually in backrooms, kitchens or bathrooms, not living room walls. In living rooms and dens, one can find the occasional pieces of furniture and the color is a patio natural.

As far as clothes, aqua seems to rank with pink in that it is not a masculine favorite. Women love the color for clothes, accessories and jewelry. While at Crazy Lady on 4th Street Gallery in Bremerton, I met one of the jewelry makers, Deborah Seamans, who was displaying an unusual aqua necklace.

Saving the best for last, one cannot think of the ’50s without an aqua association. The boastful hue was a star performer, used for everything from the T-birds and Chevy to bulky refrigerators and those ever-famous Pyrex bowls.

Aqua on the green side is ever-popular and also considered therapeutic but it seems that vivid turquoise is drama itself, waiting in historical spurts to steal the scene and be everyone’s pal. Aqua’s significance is vast and explosive yet its here-and-again popularity makes its presence less stable than deserved. Aqua could be called a period-color in the decorating world.