Remodeling for the Dream Kitchen 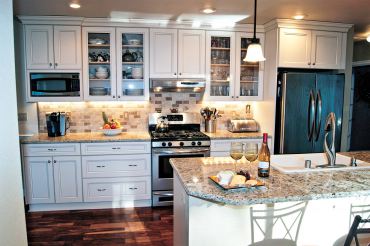 Jerry and Dolly Coss have lived in their Silverdale home since 1997, undertaking a few remodels to update various areas. And while they’ve already remodeled their kitchen once, last year they decided to gut it out and start over.

“I like to entertain but the living room got tight when you tried to put a lot of people in it,” Dolly says. “I came from a big family, so it’s not a holiday if we don’t have a big gathering.”

To solve the problem, the couple decided it was time for the wall between the dining room and the kitchen to go. With that idea in mind, some challenges had to be solved, however: the loss of the pantry and counter space.

Some creative rearranging of the new cabinets solved the storage space problem. As for the counters, Dolly knew right what she wanted: Inspired by her brother’s home, she decided to create a breakfast nook by the bay window. With the right height, the breakfast bar could take advantage of the view into their backyard and double as a counter for party staging.

Once they had their vision, there was just one thing left to figure out. Could they fit the entire kitchen remodel in their budget, along with replacing doors and flooring on the entire first floor?

The Cosses turned to Brad Moore for help. Moore, who owns Creekside Cabinets, had done other remodeling projects for the couple. He worked with them on the budget and also connected them with a contractor, Wayne Keffer of WRK Construction.

The result of their eight-week project was a transformation that not only met all the couple’s objectives, it finally gave Dolly the space she’s always craved. This past Christmas, the couple had a banner celebration, with 27 adults and seven children comfortably enjoying a sit-down dinner.

Dolly loves the new nooks and crannies that keep her kitchen organized — such as dividers for baking sheets, pullout drawers in one cabinet and built-in organizers for silverware. Some of the cabinets, including the pantry and a corner cabinet, are shallow, so it’s easy to find everything.

Even Jerry, who doesn’t cook, noticed the difference. “Things are better organized and more accessible,” he says. “There’s enough storage space so we don’t have to cram things.”

One of the new features is a decorative shelf built into the space that opens into the family room. Dolly likes teapots and wanted a shelf where she could display a collection. She got her shelf — sort of. “I like the shelf so much, I couldn’t put my teapots on it,” she says.

The remodel has accomplished its main mission. In addition to the larger Christmas gathering, the couple has already hosted several parties, including a murder mystery dinner. More parties are in the works.

Changing the Space for Changing Needs

Jerry and Dolly Coss first landed in Silverdale when Jerry was stationed at Bangor in the mid-’80s. After a tour in Japan and then Hawaii, he requested Bangor again as the top choice for his new assignment. “We wanted to retire here,” says Jerry, who is now retired after 30 years in the Navy. “The area has a lot to offer and we enjoy doing things outdoors.”

Dolly loved the peaceful setting of the home. “It’s quite nice here. We wanted to be in a neighborhood but we also wanted privacy,” she says.

Their backyard peekaboo views afford them that privacy — and now, the couple can enjoy that tranquil view of the woods from their new breakfast nook.

The Cosses see themselves staying in their home for many more years, choosing to remodel instead. For their latest project, they found a balance between using new and old things in order to keep the remodel affordable.

For example, they splurged a bit on the doors. The selected granite countertops (replacing Formica) and new cabinets. But they used paint left from previous projects and stayed with the same appliances (except for the microwave). And they were meticulous about looking for good prices on materials and fixtures — the new mirror in the powder room, Dolly points out, was a $14.99 sale-rack find at Lowe’s.

“We shopped around quite a bit,” she says.

One reason the couple’s project went smoothly was their flexibility. Another was their constant communication with the contractors and suppliers. That’s how they avoided a potential disaster during the floor-covering phase, for example.

Dolly chose a hardwood surface she loved, but partway through the process, the installer realized the planks would leave gaps that would not look appealing. Immediately, the contractor team was on the spot, trying to come up with a solution — in this case, engineered wood.

At first, Dolly was opposed to the idea. But once she saw the engineered wood looked exactly the same as the real thing, she was convinced. Not only did that decision save the look, it helped the couple stay on schedule and ready for upcoming company.

Other suggestions the Cosses have for working with remodelers include checking references and keeping open lines of communication. They used three sources for finding a contractor and interviewed two. Because timeliness was imperative to them, they asked references questions related to schedules, among other things. In the end, they were impressed and happy with the work of the WRK and Creekside crews.

“If you have a contractor that has his sources, things will run smoother when there’s a hiccup,” Dolly says.

She also notes that it’s a two-way door — they treated the crews well by providing coffee and snacks and expressing their gratitude. “The relationship with the contractor was very important,” she says.