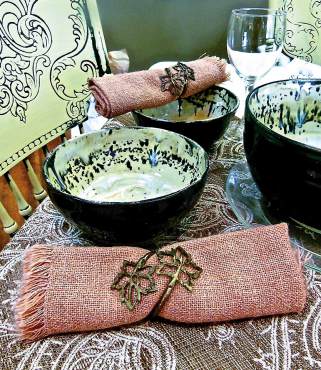 Leaving a sinking ship, the last thing one would grab would be the family napkin rings. That is a good way to put the issue in perspective.

These little treasures are not given much thought, even in our gadget-oriented society. Asking about a hundred people if they owned napkin rings, many said no. Then they would nod yes, as if to suddenly remember. But most were just taken back by the question.

A small thing with a hole, where a piece of cloth can slide through — and the reason for one is what?

Investigating the subject of napkin rings surprisingly turned out to be an interesting adventure.

The decadent Victorian era introduced these territorial definers we call napkin rings. It was as if to say, “This is properly your eating area and be assured, your napkin is clean, never used before.” 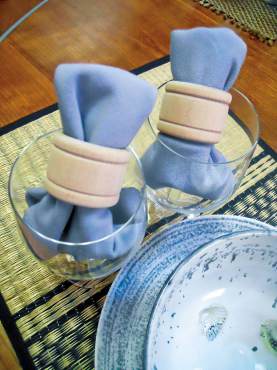 But there is a less affluent rhyme and reason. The practical application was to identify family members so the cloth napkin could be reused. This was a way to save on laundry.

In the late ’60s Pyrex introduced compatible glass napkin rings. Apparently they weren’t popular; they weren’t around that long. It is difficult today to find those vintage designed rings.

Questioning a visitor in my art gallery business, I was surprised when the woman said, “Yes, we use cloth napkins and napkin rings because we’re green.” 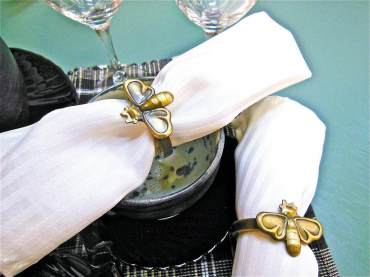 She explained that they try not to use paper products, so they prefer cloth napkins and identify users with napkin rings. 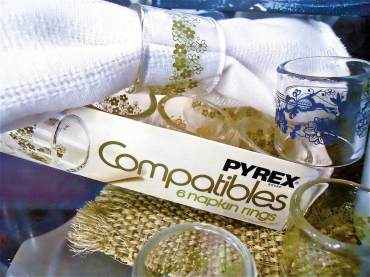 Judy Wheeler brought a group of women in to visit the Pyrex Museum. I pre-requested that if they owned napkin rings to bring one to show me. Everyone owned the little gems, and they were adorable, imaginative and produced oodles of smiles and laughter.

One gallery visitor said, “I buy them all the time, but never use them. They’re just cute.” 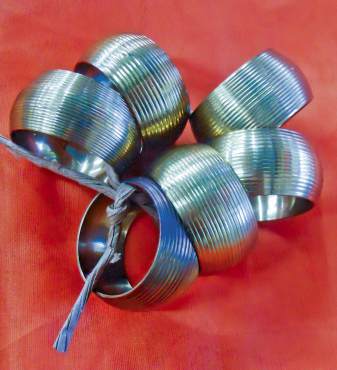 Napkin rings can have an array of functions, from showing off Easter eggs or holding back curtains, to becoming candle holders or holding and adorning scarves. I personally find a cloth napkin tied with a ribbon to be visually appealing in a table-design setting. 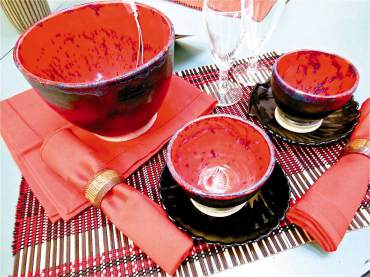 Well-known clothes designer and ceramic artist Terry Logan creates scarf rings that can also be used as napkin rings. She said that she has had orders for her ornate ceramic buttons where ribbon was to be applied to create napkin rings.

Another local potter working out of Claywerks in Bremerton, Jessica Loescher, also creates napkin rings. I introduced her to Terry Logan and the two spent an afternoon sharing clay and napkin ring techniques. 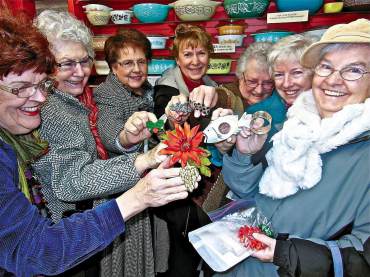 It wasn’t just women with napkin ring stories. Friend Aaron told me that in 1979 his uncle asked if he’d help clean out the apartment that belonged to his deceased great matron aunts. The two sisters had escaped the Nazis during World War II, fleeing to Minneapolis, where they became recluses.

“Did they ever use this stuff?” Aaron asked. 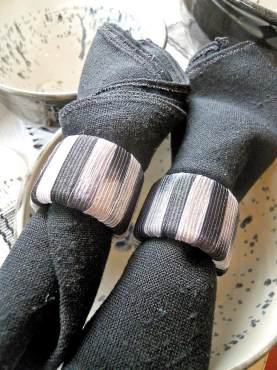 In the closet and on the mantle were boxes filled with black objects, appearing to be junk. But Aaron’s uncle took his nail and scraped a portion of the black paint, exposing sterling-silver napkin rings.

One day while exploring Bremerton’s St. Vincent Thrift Shop, I ran into my friend Mac. I mentioned that I was in search of different styles of napkin rings. He often donates unusual Pyrex pieces to the Pyrex Museum, assists with furniture restoration and has a know-how of collectables and vintage kitchen items.

“Growing up, we always used napkins and napkin rings,” he casually said. I perked to attention and began questioning, discovering that Mac grew up with nine brothers and sisters.

“Some mom,” I expounded, only to be even more surprised when he said his mom also had a job outside the home.

Another supermom was my friend Jill’s mother, who frequently set a formal table with cloth napkins and napkin rings. She said her mom wanted them to grow up feeling comfortable in a formal setting. 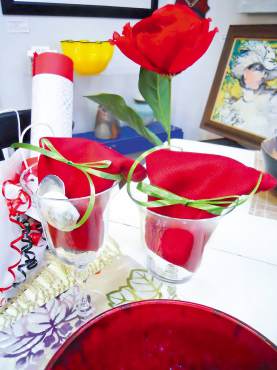 “And growing up, my sister and I never knew who would be joining us for dinner,” Jill said. “My father, the town pharmacist, might meet someone on the way home and often invite that person home for dinner. One time, he invited the high school football team home, and Mom accommodated, even with napkins and napkin rings.”

The stories varied. There was no one common thread. Possibly I did notice that of the women I interviewed, more of those who had been raised in the South had grown up with napkin rings.

Another observation that surprised me was how many people do have napkin rings today, and that they have less of a formal presence. Even in a picnic basket napkins may be individually tied with ribbons, straw or other decorative rings. Even buffets may be staged with ringed napkin offerings.

Macy’s in Silverdale offers six different styles of napkin rings, from the traditional silver to the large flamboyant. Many napkin rings are event themed: holidays, weddings or seasonal.

Departing a sinking ship, maybe one should think about pocketing a few of those cute little things.