Breathing New Life into What was Once a Humble Beach Cottage

Having become empty nesters and finding traffic in the burbs something they no longer wanted to deal with, Carol and Jay embarked on a seven month odyssey for the perfect next-stage-in-life home. They wanted beach access and a view but most importantly, they wanted a space that would allow them both to work from home while nurturing their passions — cooking for Carol, wine collecting for Jay and a mutual passion for entertaining.

They found a home that had started as a humble single-story, no-bank beach cottage and had morphed, with two separate additions prior to 1990, into a two-story, four-bedroom, three — and one-half-bath home. However, the home had seen better days and the finishes and floor plan were begging for modernization. “When we first walked in, we were captivated by the view and the fact that the location was a natural for entertaining.

You could almost hear the laughter and feel the party atmosphere,” says Carol, “but the kitchen really left me flat with its cramped layout, lack of storage, older appliances, dismal lighting and poor access to the out of doors and living room. Given the amount of available space, we knew it had lots of potential and that it was simply a matter of finding the right design and build professionals to help us bring our vision to life.”

With their initial intent of remodeling just the kitchen, dining and living rooms and first-floor office (to accommodate Jay’s 700-pound wine closet), Carol and Jay turned to A Kitchen That Works LLC.

With some structural recommendations, A Kitchen That Works LLC was able to deliver a real working kitchen design for Carol (and her builder, Agate Pass Enterprises), complete with unobstructed views of the beach, sufficient counter, socializing and storage spaces and appliances that make cooking and entertaining a pleasure instead of a chore, while improving the general flow of the home’s first floor.

A gas stove and brick hearth were removed, making room for a sliding door out to the existing south deck and a new grill. The sunken floor was raised and the sliding doors facing the water were replaced; the kitchen counter was pushed out to allow ingress from the living room; cabinetry and appliances were embedded into the oversized home office, creating enough space for a spacious kitchen island suitable for the cook and guests.

The island is one of the highlights of the project for the couple. To round it all out, a new lighting plan was developed with assistance from Lutron of Seattle to provide just the right lighting scenario for all of the couple’s activities.

Following the completion of the redesign of the kitchen and dining room, it became clear to Jay that the upstairs bedroom, which he planned to make into his office, was not quite big enough and that the wine closet was probably not going to fit well into the extra space in Carol’s first-floor office. Further the finish, and functionality of the first-floor and second-floor guest bathrooms would look out of place with the other redesigned spaces, so one thing led to another and the homeowners enlisted Seri Yeckel to address the structural redesign of these rooms.

By removing the separating wall between two of the bedrooms, Yeckel was able to provide not only enough space for Jay’s multiple computer screens but also a television viewing area where he can watch sports without disturbing Carol on the first-floor.

Not to leave any stones unturned, the couple took advantage of the county’s RePower program and had an energy audit done on the house that revealed that the heating ducts leaked like sieves, as did the windows. So along with the cosmetic and functional improvements, they also made energy-efficiency improvements including new windows and doors, duct sealing, insulation and heat pump.

Thoughtful selection and placement of furnishing and interior finishes by Brenda Egge of Thanks, Mom have given Carol and Jay a variety of seating areas that allows them to enjoy different views throughout the day. Now that the house is more comfortable and functional, they have time to watch the waves as well as share their virtually new home with family and friends. 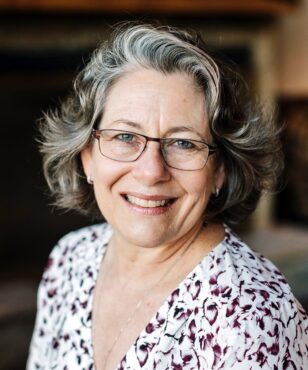 An award winning designer and general contractor, Molly Erin McCabe, AKBD, CLIPP, CGP, CAPS is the principal designer and co-owner of A Kitchen That Works™ LLC. Ms. McCabe has published numerous articles and has lectured locally and nationally on design and construction. She has contributed as a Subject Matter Expert for the US Green Building... (see more by Molly Erin McCabe, AKBD, CLIPP, CGP, CAPS)