Capturing the Light — A Home to Match the View 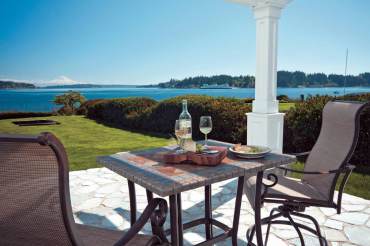 From the beginning, it was a mismatch that invited the question: Why would you take one of the most jaw-dropping views on Earth and design a house that didn’t take advantage of it?

Yet that’s exactly what Elizabeth and Bob lived with for 13 years after they bought their waterfront property (the couple asked that their last names be withheld to protect their privacy). Their view is the staple of postcards — Mount Rainier hovering on the horizon, light winking off the water, a pleasing parade of sailboats passing by, children and dogs cavorting on the beaches out front. Add to that a generously sized, mostly level lot that ends where the beach begins, and it’s easy to see why they fell for the property. 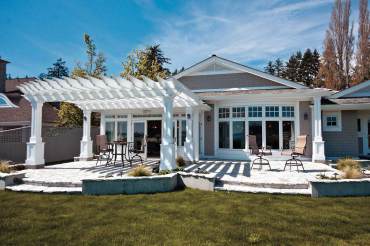 Elizabeth is a retired corporate attorney; Bob, a retired corporate executive. For years they were just too busy to remodel, so they lived with a dark house that failed spectacularly to take advantage of the lot it sat upon. The dining room, for instance, was a small, narrow room off the kitchen that made family dinners a challenge. There was a dip in the floor for the original owner’s rug, with plywood underneath. But perhaps the worst insult of all, it had only a single, smallish window that looked out upon the next-door neighbor’s house. Something had to be done. 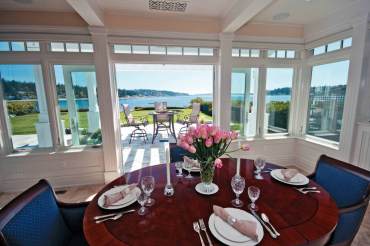 And then there was the issue of oak overload. “This house had entirely too much oak in it,” says Elizabeth, a topic she frequently returns to while showing off her now-much-brighter home. Cabinets and 9-foot-tall bookcases were oak. So were floors and fireplace mantels. Ditto the doors. Even the ceiling in the living room was oak.

For a long house that sat on a long, narrow lot, the oak served as one more element complicit in shrouding much of the house in shadow. Enter Derek Reijnen, owner of the Reijnen Co. on Bainbridge Island, and architect Patrick Hungerford. 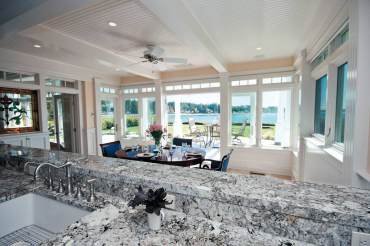 “The house didn’t take advantage of the view or orient rooms toward the view,” Reijnen says. “The way the rooms relate to the view after the remodel is totally different.”

The homeowners had entertained ideas of remodeling over the years, according to Elizabeth, but “it was hard to make it all come together.” “When we got together with Reijnen, it started to come together,” she says.

Goodbye, oak. Hello, walnut, marble and granite. And hello, light: Not only were colors lightened and brightened, but 20 solar tubes were added throughout the home to draw light into the spaces and rooms far removed from the southern exposure. 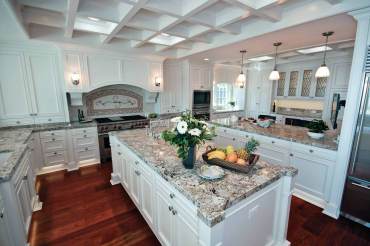 Elizabeth’s mother was English, and she traveled to England as a young girl, often touring stately homes with her mother; it made an impression. “I like the feeling of older buildings,” she says. “I like that feeling of history. Give me the old stuff. I love it.”

To create that Old World, historical feeling in her newly remodeled home, several design elements were incorporated, including thick millwork throughout. “We maxed it to the limit,” Elizabeth says. “It’s really something to look at, almost like a piece of artwork.” 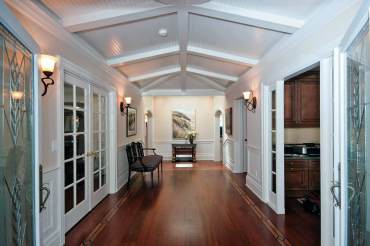 Then there are the ceilings: In the living room and dining room, the oak-and-bead board ceilings were replaced, respectively, with dramatic timbered ceilings that feature wood paneling and inverted hips. In the kitchen and some of the hallways, low ceilings were replaced by coffered ones, which opened up the vertical space while giving them a more traditional feel.

One of the main drawbacks to the home was the distance between the front door and that million-dollar view. The owners, according to Hungerford, wanted to feel “overwhelmed by beauty” when they walked into their home, but it was challenging to create the desired visual impact with the view so far away. 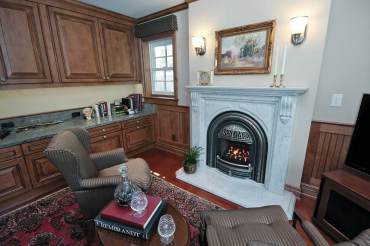 To solve this and other issues, Hungerford and Reijnen reapportioned the space in the entryway. They shrunk what the couple referred to as the “great hall,” an awkward rectangular space perpendicular to the entry hall that had no clear function and seldom got used, but which occupied a lot of square footage.

“We made it less grand,” Hungerford says. “It was a tremendous waste of space.”

They gave some of the space to the kitchen and to the living room, as well as to the closet in Elizabeth’s office. They artificially widened the arches between rooms, giving more distinction to the individual spaces, in keeping with the couple’s desire to create a more stately, formal feeling. “It kind of meandered before,” Hungerford says. 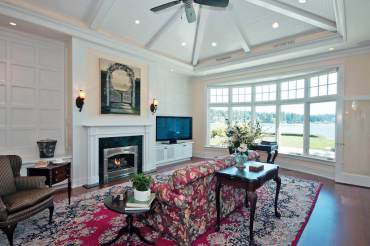 And they “played a lot of the time with ceiling heights,” according to Reijnen. “The ceiling is part of the hierarchy in every room that makes the experience of the room different,” he says.

There is one ceiling height in the entry hall, for instance, another in the square “art hall” that solved the question of how to create beauty upon entering: Above the symmetrical art hall is a soaring light well that floods the wall where “Top of the Dune,” a 3 1/2-by-4 1/2-foot oil painting by Oregon artist Liisa Rahkonen immediately draws attention. Beneath it, a dramatic medallion inlay from Yarema Marquetry was laser-cut into the glossy Jatoba hardwood floors by Tom Salisbury of Salisbury Woodworking. 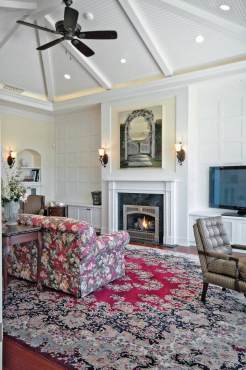 To add the space needed in the living room for accommodating a large Persian rug that the owners bought in Texas, they bumped the south wall out three feet into a bow. On the desk in front of the window sits a magnifying glass on top of an early 1900s ledger from U.S. Steel, where Elizabeth worked after graduating from law school. It’s not hard to imagine spending many happy hours thumbing through its meticulously handwritten pages while pausing to watch boats glide by outside. 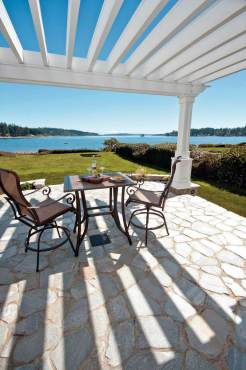 For the kitchen cabinets (which were oak, of course), as well as cabinets in the powder room and Russell’s office, the owners brought in Dennis Langford, principal of Kitchen Spaces in Costa Mesa, Calif., and regional representative for Downsview Kitchens of Ontario, Canada. Langford and the couple have worked together before, and Langford had them tour a $25 million home he’d worked on in Laguna Beach, Calif., to give them some ideas (in fact, the white paint that now brightens up much of the home is called Laguna White).

“We came and told Reijnen, ‘We don’t have $25 million,'” Elizabeth says with a laugh, before praising the final result, including finishing touches like kick-toe lighting under all of Langford’s custom cabinets, which are topped by granite countertops with decorative square corners laser-cut by Western Tile & Marble of Bellevue. Now the bright and airy kitchen has plenty of separate workspaces and casual seating on its north end, where the dining room used to be. 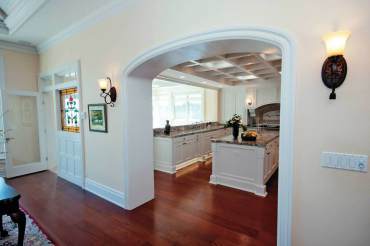 And that cramped dining room? It now sits at the south end of the kitchen, in what used to be an enclosed porch with cement floors. The cement floors have been replaced by Becagli Light stone, tall windows flood the area with natural light, and there’s ample room for a large dinner party to move about. French doors lead out onto the new, raised stone patio built by Bret Winslow of Winslow Masonry in Port Orchard. It’s a perfect place, on a nice day, for an outdoor lunch.

For the owners, the remodel has changed the way they feel about walking into their home. “It feels welcoming now when I walk in the front door,” Elizabeth says. “My husband says, ‘It’s friendly now.’

This article was first published in the Summer of 2012 print edition of the WestSound Magazine. Any discrepancies, omissions, or inclusions that seem incorrect are purely due to the age of this article. WestSound Magazine deemed this article useful and beneficial as a contribution to today's readership, and therefore is included in this site's online article archives. If you feel the content of this article is detrimental due to its age, please feel free to contact us to request removal or modification.
Tags: art, craftsmanship, décor, design, home, kitchen, remodel, view, water