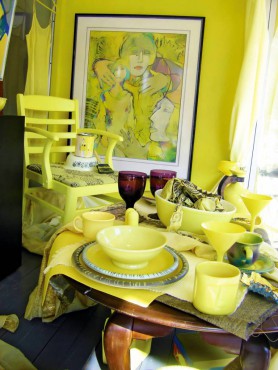 Scary might describe the color yellow, but most would prefer the term “happy.” This happy-face hue may be kitchen-friendly, but otherwise the color is like wild bees mixed with bulls in a rodeo chute.

The color we are talking about is primary yellow, basic yellow, kind of something between lemon and daffodils. 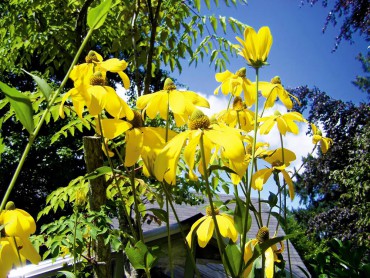 It didn’t take long to realize the color yellow would be an interestingly intense study that would span the gamut of extremes. I mentioned to retired New York floral designer Gordon Andrews that I was writing about the color yellow. He gasped in horror, replying, “Some adamantly detested it like no other color.”

Sandi Corbit, who has owned Bremerton’s Flowers D’Amour for 19 years, said yellow is the shop’s most requested color, especially with roses. I asked Amanda, a sales clerk at Pacific Fabrics, which was the least color fabric sold. You guessed it — yellow. When I went looking to buy my first new car, I asked a salesperson what the safest car color was. Yep, yellow.

I also visited many furniture stores, finding little or no yellow.

Carl Glivar, owner of Great American Furniture in Bremerton, said they just don’t carry the color. “Ten years ago, we had a blue and yellow sofa, and it took forever to sell it,” he said. 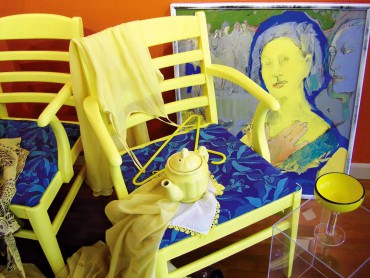 To get a different viewpoint, I drove to the Bremerton City Nursery, a business that has been dealing with gardens and landscaping for more than 50 years. Now-owner Theresa Dreaney told me that using yellow, even in small doses, is a must. “It is the color that makes every other color pop,” she said. That “popping” concept is also true in art and interior design.

“Oh yes, I use yellow in my interior décor,” many would say, only to discover it was not primary yellow but rather a spin-off — either enhanced, muted or an interpretive version. Mustard and Dial-soap yellow are common versions.

From my study of five years of Architectural Design magazines, one of the interesting things I found about yellow is that it is the most used color in its defused form, yet it is the least used color in its true form. And, as far as holiday colors, I have never seen the words “yellow” and “Christmas” in the same sentence.

I decided to examine artists’ paintings for the color yellow. Collective Visions is a Bremerton co-op gallery representing 25 artists and exhibiting approximately one hundred different pieces per month. Starting with June, I examined each show for paintings that had at least 25 percent basic yellow. Yellow was a no-show, lest for one primarily yellow abstract and a few others, most being with a floral theme.

Early on I began the deliberate challenge of creating a fine-art yellow table installation, which was not easy. Yellow does best when paired with an equally dominant primary color. The blue and red dance is a happy combo, but it is also a scene-stealer. That became an elimination factor, as I wanted yellow to be the headliner. I wanted viewers to be exposed to a new sensation and awareness of the color. I painted chairs and dishes; and friends contributed items to the yellow conglomeration, installed in a large gallery display window, in which I even painted walls bright yellow. 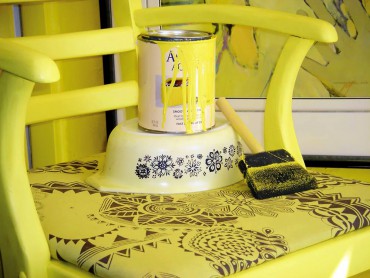 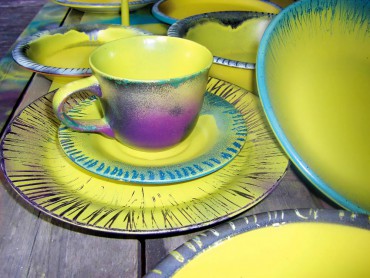 The color exploration continued to take on a life of its own, as I began creating paintings based only on the color yellow. It was a wonderfully enormous experience, as the once thought of happy-face-hue took on a somewhat positive yet dark, morose feel. One large painting called “Tribe of Friends,” featuring nondescript facial expressions, brings yellow to an almost surrealistic level, as one does not expect the color to be that seriously somber. I also painted oyster shells for kinetic sculpture projects and felt the same serious grace.

In the real utilitarian world, this overwhelming amount of bright basic yellow would not be easy to live with, but a few moments of viewing should tickle one’s soul.

And if yellow is one’s cup of tea, professional designers can help carry it off.