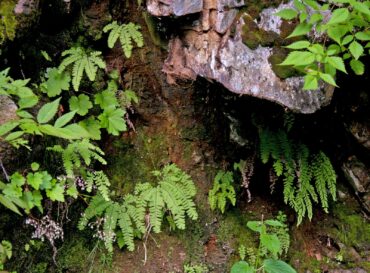 Ferns are some of the earliest forms of plant life found on the planet. Fossil records date back to about 500 million years. About 300 million years ago, ferns dominated swamp forests, where they became the coal deposits that we mine for energy today. Even the family they are classified under — Pteridophytes — sounds ancient.

The Pacific Northwest is blessed with a variety of beautiful ferns. Our region is rich with big leaf maples draped in moss and fern species such as Polypodium glycyrrhiza and scouleri. The native sword ferns live alongside the creeping Oregon grape and salal on the forest floor. All adapted to live comfortably in the dry shade of conifers and deciduous trees that populate our woods. 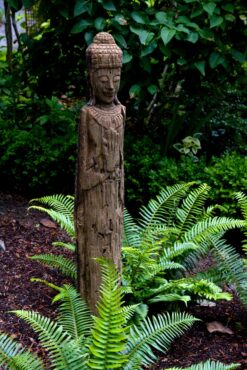 There is nothing that compares to the pristine forests of our land. Many of us know that spending quiet time in these places helps us find calm and peace, with a reverence for the spaces where the wild ferns grow.

The native ferns let you keep your beloved trees and grow something underneath. In the garden, native ferns add a green foliar dimension, and evergreen species bring a beautiful year-round presence. They thrive in difficult areas of dry shade where not much else grows. These ferns are rugged and nearly maintenance-free when planted in the right place.

An excellent way to identify if a maidenhair fern is native to the Northwest is by its black stems. The attractive fern grows on stream banks, in bogs and precariously balanced on coastal cliffs. Adiantum means unwetted because the foliage sheds water.

In the garden, maidenhair ferns are invaluable, as their light and airy textural foliage pairs well with large leaf hostas and other plants with well-endowed foliage. The ferns are equally at home, creeping out from a crevice in a rock wall or growing under our native vine maples along a stream bank. They adapt to growing in partial shade or full sun.

Adiantum is not just another pretty fern. Native Americans in Washington state use the ferns as basket-weaving material. One tribe, the Hesquiat, used the leaves medicinally to gain strength; their dancers used them frequently during winter.

The tea, used as either an infusion or decoction, makes a hair rinse that adds body to the hair. Mixed with chamomile or yarrow, it leaves hair with body and luster. It’s also a gentle medicinal to treat respiratory tract, hypoglycemia and menstrual disorders.

Although deer ferns are native in different areas around the globe, they are much loved in the Pacific Northwest. The fern is easily identifiable with ladder-like, fertile, deciduous fronds, which grow stiffly upright in the center when present. The outer, evergreen fronds spread out in a rosette around the perimeter.

Blechnum is a classical Greek name for fern, while spicant means a tufted hard fern. It ranges from sea to alpine altitudes yet looks its best in a mossy woodland setting with plenty of moisture and acidic soil. New growth is a pale green compared to its mature deep green foliage.

An easy little fern to grow in our naturally acidic soil, it thrives in the shade but can even handle full sun if given supplemental watering.

Bloedel Reserve on Bainbridge Island, with the largest public moss garden in the United States, is peppered with these fern beauties. The moss garden is kept in pristine condition, with not one moss hair out of place.

Deer and mountain goats graze on these ferns. After a deer’s antlers break off, the animal rubs the sore stubs on the fronds. Observing animals doing this, Native Americans decided to use it for skin sores. They also chewed the foliage for internal cancer treatments and digestive aid. A poultice was made from the fronds and applied to areas of the body afflicted with paralysis and other ailments. Today, we grow it for its beauty in the garden.

Almost everyone who lives west of the Cascade Mountains recognizes our native sword fern. Most likely, where there are trees, there are colonies of sword ferns under them or nearby.

The garden’s native fern looks excellent, growing in mass plantings and mixed with other ferns and shade-tolerant plants.

Alas, familiarity breeds contempt, as the sword fern often does in our region. However, gardeners back East love them but struggle to grow them. Being the biggest fern in the Polystichum genus, sword ferns make a tremendous year-round presence in the garden around Puget Sound.

Sword ferns played an essential part in the lives of Native Americans, who chewed young leaves for sore throats and washed sores with an infusion of boiled rhizomes. The rhizome was baked in pits or boiled.

Children played a game with the fronds, seeing who could pull off the most significant number of fern leaves while holding their breath, saying “pila” with each leaf pulled.

Polystichum comes from the Greek words polys (many) and stichos (a row, which refers to how the sori are arranged). Munitum means armed with teeth.

The giant chain fern is the largest one native to North America, growing along the western half of Oregon, Washington and British Columbia. The fern grows as far south as California and Baja California, as well as in Nevada and Arizona.

It would be a sight to see these ferns reach 9 feet tall, growing in the shadows of a moist woodland. The soft-green, long fronds and graceful fern shape are beautiful in the wild and garden, where it will reach 5 feet tall. The placement of the sori resembles a metal chain and gave the plant its common name, giant chain fern.

Unfortunately, in our state, there is a limited number of wild plants. The ferns are threatened by erosion and invasive species.

Woodwardias grow well in woodlands, next to streams, moist bogs, springs or ponds and even in containers. Give them extra moisture during our annual summer drought and they will thrive in the garden. The giant chain fern is not very frost tolerant, so grow it in a woodland or protected area.