In the Poulsbo garden of Brian and Karen Rasmussen, the term "collectors' garden" means more than plants.
May 9, 2022 - Featured, The Garden - Comments:
Text by Wendy Tweten 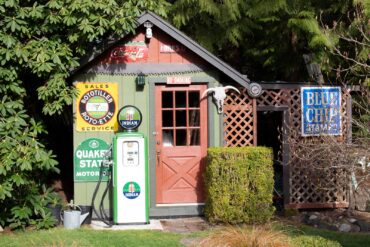 How do you recognize a truly inspired garden, one with humor and style and a joy that reflects the personality of its creators? Sometimes, there are signs.

In the garden of Brian and Karen Rasmussen of Poulsbo, an extensive and carefully cultivated collection of vintage Americana overflows into the beds and borders. Among an old-fashioned gas pump, an elegant wrought-iron gate and a cow skull with electric red eyes are the signs. Big, bold signs of yesteryear that hawk everything from Green Stamps to hot dogs. Signs that recall warm summer drives with the windows down and fun at the end of the road. 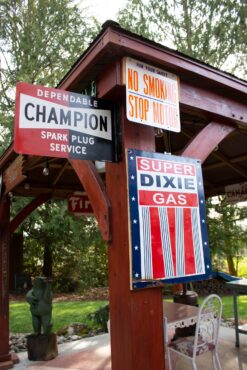 Add to this the carefully nurtured plants and lovely layout, and the question is, are these collectors who love to garden or gardeners who love to collect?

For the Rasmussens, it’s all of a piece. Although Karen credits her husband as being the head gardener, the result is obviously a joint effort. Fortunately, the couple’s individual styles complement each other. Brian is drawn to foliage, while Karen is a flower girl. 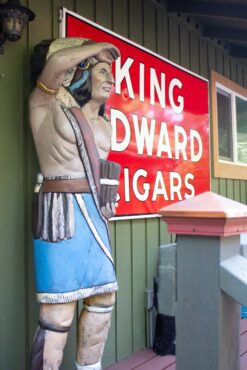 “Anything with flowers is hers,” Brian Rasmussen acknowledges. He prefers grasses, hosta, ferns, pine and — well — rocks. She has her own garden space, wherein the flowers bloom: fluffy purple cotinus, aggressively red crocosmia and hydrangeas.

When it comes to hydrangeas, Karen Rasmussen isn’t all about the mopheads; she’s attracted to the more heat-tolerant peegee and oakleaf hydrangeas. She also favors flowers for cutting, which she does throughout the summer, keeping her house filled with arrangements. To meet the need, she maintains a cutting garden of dahlias and rudbeckia in shiny steel stock tanks from Wilco. 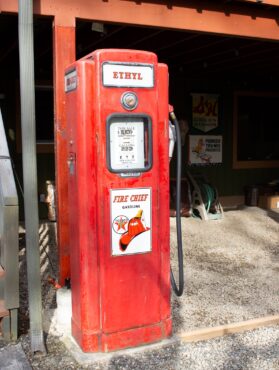 The couple’s acre and a half isn’t entirely gardened — yet. In the 38 years they’ve lived on the property, the Rasmussens have planted every one of the existing ornamental shrubs and trees, including the now venerable Japanese maple that shades the moss garden. 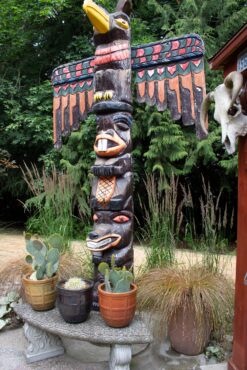 The moss garden itself is a good example of knowing when to let nature take the lead. When the koi pond became a losing battle due to raccoons shredding the water plants and herons eating the fish, the former spillway became a natural moss garden. As the rocks disappeared beneath soft pillows of green, Brian Rasmussen added hosta, maidenhair fern and small stone pagoda lanterns.

As laudable as the design itself is, so is the fact that he created all the hardscaping. Rasmussen laid every brick and rock and stirred the concrete in a portable cement mixer. Into one walkway, he added a bit of whimsey with Bob Kimball concrete fish. 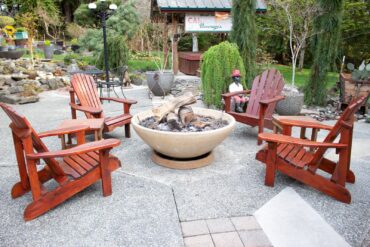 An important part of the hardscape is the firepit where friends gather for 4th of July barbecues and autumn get-togethers. Two gazebos and a shed double as outdoor galleries for signs that tout the virtues of Canada Dry Beverages and Jacques Seeds. The house is not immune. It recommends Zip Formula Feeds and Clabber Girl Baking Powder (“It’s Balanced”).

“We’ve been collecting signs for years,” Rasmussen says, to no one’s surprise.

The couple has searched out their treasures up and down the West Coast, going as far as Montana when other business took them east. They particularly enjoy large antique expos. When it comes to their hobby, the couple travels memory lane together. 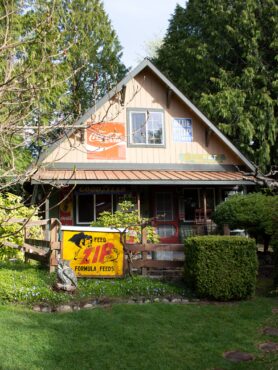 “We understand each other’s obsession,” Karen says with a smile. “And we buy right; we don’t overspend. When we get tired of things, we have a garage sale.”

Some things are boredom proof. Consider the cow skull to which Brian — who restores lamps when he’s not gardening, woodworking, setting walkways or hunting collectibles — added red light bulb eyes. Or the totem pole the couple found on the way to a Portland expo. Then there’s the vintage mining cart, Brian’s gift from Karen, of which he is particularly fond. 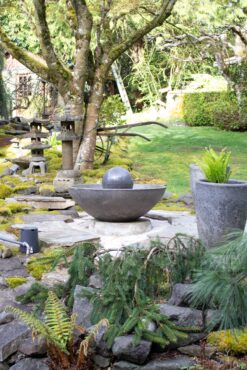 Brian Rasmussen wasn’t always a gardener. He describes himself as “pretty lazy” when the couple were newlyweds, living in a “cute little house in Poulsbo.” That changed with their move to the property they’ve called home for nearly four decades.

He recalls being inspired by Heronswood Garden of Kingston.

“It affected my view of what a garden can be,” Rasmussen says.

One of his takeaways from Heronswood was the role of containers. He appreciates the way containers add height and draw attention to the plants they hold. They’re also good for displaying collections, such as his assortment of prickly pear cactus.

For growing vegetables, which the couple doesn’t always find time for, Karen prefers her stock tanks. Although Brian discriminates against no container, he particularly likes the cast concrete planters of Ornamental Stone of Allyn. 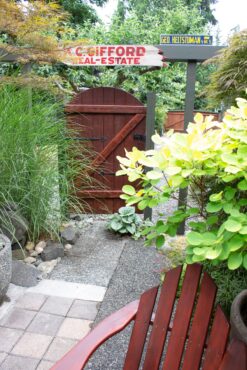 The Rasmussens feel lucky to live in an area with so many good nurseries. Frequent stops include Poulsbo’s Valley Nursery and Kingston’s Savage Plants, which is fun, says Brian, because “you never know what you may find.” He doesn’t discount the big box stores either. It’s a matter of checking frequently. For instance, Brian uses weeping and columnar sequoias for garden structure and knows how pricey they can be. 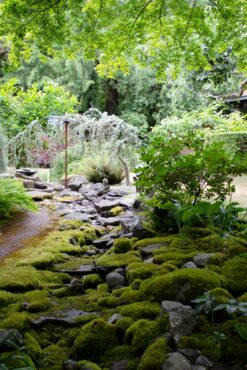 “In 2008, during the downturn, Home Depot had pots of them that they were practically giving away,” he reminisces.

His best gardening advice is this: “There’s not a right or wrong way to plan your garden. Do what you like and redo it if you need to. I’ve pulled everything out and replaced it at least once.”

After nearly 40 years of fine-tuning, the Rasmussen garden requires only an hour or two per week to maintain, according to Brian (although one suspects that, since he loves to garden, he spends countless random minutes here and there tidying and heading off trouble). The main downside, as the Rasmussens see it, is that a garden such as theirs requires attention in the summer, especially if a heat wave threatens. 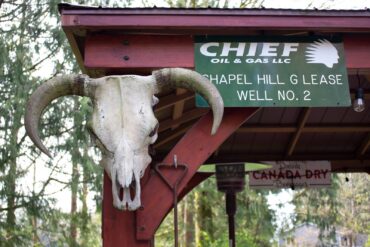 “Having a garden in the dry summer is kind of like having pets,” Brian says. “You can’t just leave them without someone checking on them for you.”

This can make summer travel a challenge. But the Rasmussens wouldn’t dream of one of them staying home when the hunt is on for fabulous pieces of the past. After all, in gardening and collecting — and everything else — it’s a partnership.

“If I didn’t have someone to share it with, there wouldn’t be joy in doing it,” Brian Rasmussen says. “The fun is in the sharing.”