She tiptoed across my yard on slender legs. Pausing demurely, she batted her big, doe eyes at me. Such a pretty thing. Such grace. I wanted to be her friend. “Have an apple,” I said, and shook the tree until apples rained down.

She chose the nearest fruit and as I walked away, I heard contented crunching. It was a beautiful moment, a scene from a nature documentary. The Graceful Deer. Bambi. The Yearling. Mankind in Harmony with Nature.

Then she invited her friends, and they ate all my plants.

Ah, life in the country. The eagles eat the chickens. The coyotes eat the cats. The squirrels eat the plums, the rabbits the bean plants, and the raccoons the birdseed. One dark night, I was in the chicken yard in my bathrobe swatting an egg-stealing opossum in the backside with a Maglite. If all that weren’t enough — oh, the deer! The deer eat everything else.

The thing is, I’ve tended my gardens here in Kingston for decades. Over the years, I thought I’d winnowed down the beds to plants deer don’t eat. Long ago, I gave up on tea roses, raspberries and tulips in the garden. Lately, however, the deer have stepped it up, both in appetite and number. Suddenly my beds are a 24-hour, all-you-can-eat buffet — damaged and denuded at every turn.

Perhaps my experience can help other gardeners. Are you planning a garden in a deer-infested part of the Kitsap Peninsula? Do you need to replace deer-candy plants that are now nothing but eyesores? For you who want less heartbreak and lower maintenance, who want to admire the local whitetails that wander through your garden (rather than wishing for hunting season to start), I share my trauma. 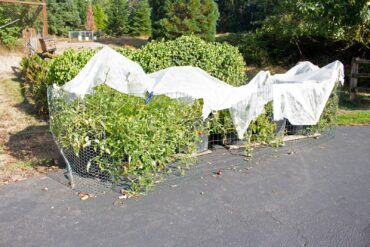 Spring and summer are when the four-legged landscapivores do most of their damage around my house. They know that the first of my apples ripen in mid-July and they start checking early. While they wait for apples and pears, there are plenty of other things upon which to dine. I must admit, one benefit to the deer is that my apples have much less apple maggot and coddling moth damage than they used to since the fruit are no longer allowed to lie on the ground for more than a few hours before being eaten. The deer are digesting the larvae before it can escape from the apples into the ground to pupate.

In addition to eating anything that can’t run away, the bucks have stunted or outright killed a few trees by wholly or partially girdling them in the act of — I’m guessing — rubbing the velvet from their antlers. Victims include crabapples, Deodar cedar, madrona, empress trees and a promising magnolia that is now struggling back from the base. I have no idea what my 3-foot-tall camellia did to incur their wrath, but it’s now a raggedy, 1-foot-tall camellia.

With some plants, it’s mainly the flowers that are delicious. These include daylilies, Japanese anemones, gazanias, petunias, lilies, tulips and pelargonium (old-fashioned geraniums). The deer leave these plants with bare flower stems pointing skyward like a bunch of lost barbecue skewers. The effect is disquieting, like stumbling into the garden of Morticia Adams. The marauders have applied the same technique to my run of ‘Midwinter Fire’ red-twig dogwood, once a hedge but now a groundcover, the top few inches bare sticks that bristle like a hedgehog. 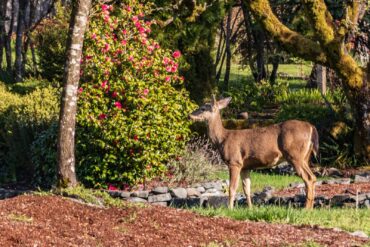 My deck is the last bastion for plants that both the deer and I love, such as tulips, hosta and petunias. Anything I can’t live without and can’t protect in some clever way must go in a pot and join me on the deck. I can’t help but wonder, in the summer as darkness falls, how long it will be before the deer stroll up onto the deck to spend starry August evenings stuffing themselves with petunias and staring in the windows.

As far as clever ways to drive back the deer, the best solution I’ve found so far (next to a 10-foot fence or an outdoor dog) is a motion-activated, animal-repellent sprinkler. You know, the little battery-operated devices that shoot water like a machine gun when triggered by a passing form? It’s the only reason my once-rampant ornamental grape is now even alive.

Unfortunately, the water shooters aren’t foolproof. They don’t work well in the dark, batteries die, and the deer get bolder as the months go by. And, yes, I have accidentally drenched myself several times.

Fortunately, my fruit trees are all decades old. Trying to establish fruit saplings in the face of the burgeoning deer population would be a challenge. Even my mature fruit trees are sustaining a lot of damage, losing any limb lower than the deer can reach on their hind legs. 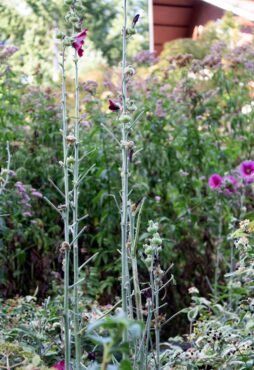 Oh, yes. They rear up and strip everything to 6 feet from the ground, breaking branches in the process. If you live in deer country and want fruit trees, I recommend semi-dwarf or larger, not dwarf trees. Newly planted trees will probably need full cages for their first 10 years or so.

A few thoughts in closing. Although deer are notorious rose eaters, they eschew (not chew) my heirloom shrub and rugosa roses. Oddly, the deer strip my tomato plants — to the point I must encase the pots in chicken wire cages — but never touch any of my ornamental grasses.

When you see the marauders up close, you realize how big and powerful they are. I realized with a shock, watching them stand up to break another tree limb, that one of those bucks could take me out! And yet they run away from my 20-pound Shetland sheepdog (who sees them so often, he can hardly be bothered to chase them anymore).

That’s it. You’ve been warned. Beware. The deer are coming. And they’re hungry.

What to Plant or Not to Plant

Here are the results from my garden. The plants with damage noted as “catastrophic” are ones I wouldn’t bother to plant in any deer-infested neighborhood. 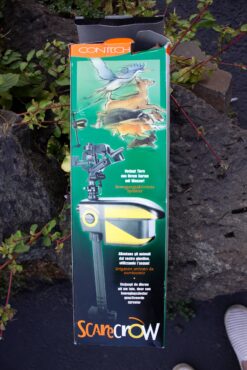 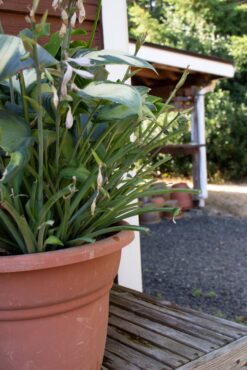 PLANTS DEER DO NOT EAT