Artistry and Imagination Create an Explosion of Color 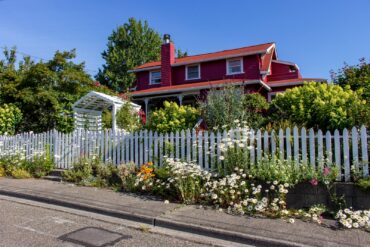 It takes imagination and a lot of time to create an exciting and colorful garden. But Barb Grams was up for the challenge. She began gardening while in ninth grade, planting primroses for her mother.

In September 1975, Grams and her husband purchased a (now 108-year-old) home in Manette. The one-third-acre corner lot was a blank canvas of grass and a couple of fruit trees surrounded by a cyclone fence. No flowerbeds.

Like most newly married couples, they had little money. Grams looked at the yard as a clean palette. She started with shasta daisies and phlox from her mother’s garden.

She received a rose start from her grandmother, which produces the most beautiful cabbage roses and may go back to the 1950s. Grams has since moved it four or five times. Her yard now boasts 18 or 19 rose bushes; one is a single-petal shrub rose from a neighbor, one is a light-pink fairy rose and the rest are all Jackson & Perkins roses.

The day she started planning the islands, Grams laid out hoses to design them. Although her husband mows and edges, he leaves the design and planting to his wife. He did build the arbor and the picket fence.

In 2005, with four children added to the family, it was time to remodel. They needed more room. Grams had to dig up nearly all her plants to save them. When the remodel was complete, she decided to plant hydrangeas near the house instead, as they love the sun. The garden features 25 hydrangeas altogether, ranging from ‘Vanilla Strawberry’ and ‘Limelight’ to ‘Bluebird’ and ‘Endless Summer.’ 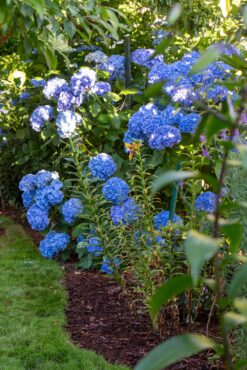 Grams has an unusual assortment of trees that include two bartlett pear trees, believed to be in their 80s; and an Italian prune tree, which she grew from a stick that came up in her raspberries. Every year, it produces nearly 500 Italian prune plums.

The huge maple by the driveway is a red maple planted in 1988; there are also a vine maple, a Japanese maple and a Princeton maple. Next to the rock cropping around the pond is a Fatsia Japonica. The two cherry trees, a Van and a Stella, are both semi-dwarf. Grams has planted all the trees, with the exception on the pears. 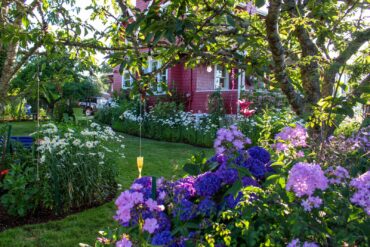 As for pots on the patio, Grams purchases geraniums in multiple colors, tuberous begonias, fibrous begonias, perennial climbing sweet peas, liatris (a huge purple wallflower) and 10-foot cut flowers, also known as silphium perfoliatum. The garden islands boast 11 lilacs. At the end of the flowerbed closest to the house is a fothergilla, a bush Grams really enjoys. Grams shops for plants at Valley Nursery and Bainbridge Gardens, among others. 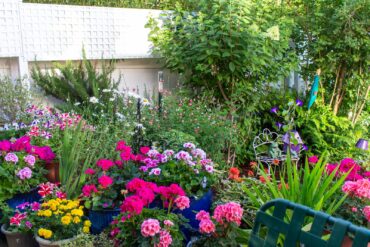 From March through the end of October, the garden bursts with color and texture. Grams says the grass pathway creates the cohesion between the flower beds, offering a peaceful setting. She has a natural sense of design, thanks to her artistic background. A self-taught gardener, Grams is also an avid researcher. Fortunately, she possesses a wonderful green thumb.

Some of Barb Grams’ Perennials

Grams says the garden is lots of work. Every year, she digs up her flowerbeds, adding new bulbs for variety. She likes a vibrant, exciting plant selection where color is everywhere.

Grams is thankful that so many people love her garden. Some stop by daily, taking photos, asking questions and even requesting clippings. Visitors sometimes say that the large display of Grams’ perennials reminds them of their grandmothers. Some people have even tried to dig up her plants.

As for advice, Grams says she tries to add organic material to soils, keeping everything as natural as possible — even using egg shells and coffee grounds. Also, not every plant is a good fit, she cautions. Try moving it to another location — or two. And as for plant choices, Grams says, “I have a hard time passing up unique, new flowering things. It’s like bringing nature into my yard for everyone to enjoy.”