An Enchanting Garden for a Century-Old Cottage
July 19, 2021 - Featured, The Garden - Comments: 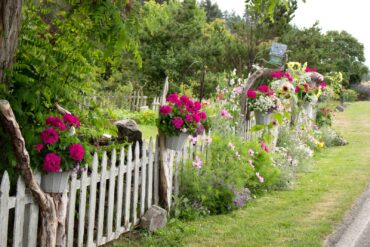 Originally, the Palmer cottage served as a little general store on Rolling Bay. In the 1940s, it was moved to its present location on Manitou Beach Drive along the water. It’s situated next door to the Red Wing Blackbird Sanctuary.

Lisa Dunham currently leases the cottage from Gary Palmer, who grew up in the green house located behind the summer cottage. His parents planted the cattails in the sanctuary. They sold them to Seattle flower shops, helping his family make ends meet after the war. 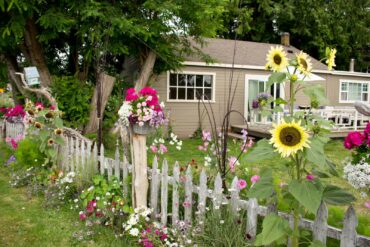 Dunham met garden designer Teri Cole at a Christmas party. She loved Cole’s enchanting garden and wanted to do something unique in her own little yard. Cole agreed to help. They would need flowers that like salt, sun and wind.

Then, Cole went shopping. She went to Bay Hay and Feed on Bainbridge Island and Valley Nursery in Poulsbo. She searched for the plants she was certain would work.

After digging out both sides of the old fence, they planted beautiful roses. Cole added cosmos, delphiniums, geraniums, sunflowers, daffodils, daisies and nasturtiums. She added grasses and golden hops. True to Cole’s style, she included decorations — throwing in sea driftwood, seashells and birdhouses. All that and handfuls of seeds, creating a delightful feature in the old, rustic fence.

The 100th birthday of the cottage will be summer 2022. Dunham wants to celebrate it and is collecting any stories or photos from people who have lived there. She says there are many stories from the little cottage and she would like to see them preserved.