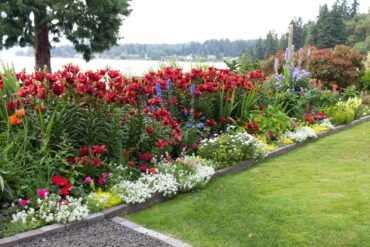 You’ve seen the photos in ads for miracle makeovers: the plain little face “before” and voilà! the lovely visage “after.” That same message can be applied to gardens, as was the case with this miraculous makeover of Susan and David Crossland’s garden in Bremerton. In just six years, they transformed a plain little house (circa 1941) on an otherwise empty lot into a thing of beauty and a joy to behold.

It’s not surprising that the Crosslands are both active, go-getter types. Native Washingtonians, they grew up in the Yakima Valley. Throughout their adult lives, they spent many years traveling between Yakima and the Kitsap Peninsula because of their jobs. He is an attorney and she is a pharmacist.

Six years ago, they finally decided they wanted to settle in a place with a water view and room for a big garden. While staying at their vacation home in Indian Hills, California, their realtor called and told them about a little fixer-upper house she found in the Tracyton area of East Bremerton.

The property had a wonderful view of Dyes Inlet and the Cascade mountains. There was plenty of room for gardening on both the water side and the street side. They bought the property sight unseen and have never been sorry. 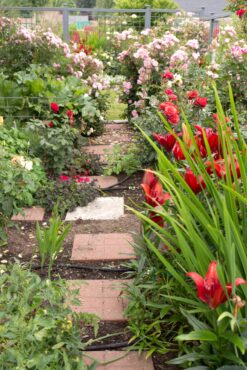 Though the home was solidly built, it was an unassuming and unimaginative little cracker-box of a house on a cliff. The western side of the house looked out on fabulous views but there were no windows on that side. The Crosslands decided to keep the footprint of the building and added wings for extra rooms and a new garage, forming a central courtyard. Large picture windows were incorporated into the west side of the house to take advantage of the view from all of the most lived-in areas. A sizeable deck was added on that side. 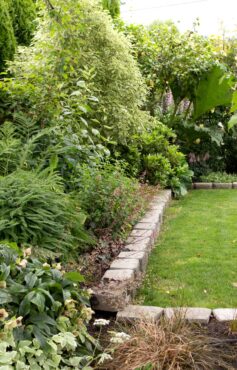 The property was completely bare except for the little house and a few old apple trees — a wonderful empty palette for a garden. So much had to be done to get ready; fences had to be built and raised beds had to be designed. Gradually, the garden evolved into sections or “rooms,” with each area having a definite personality. In the meantime, the house was being reconfigured and made into a dwelling that reflected the lifestyle of this energetic couple.

The Crosslands’ property is just 200 yards from a public boat ramp. While this is convenient for putting in their kayaks, the gravel area in front of the house was often used as parking by boaters, who left their cars there after putting in at the ramp. 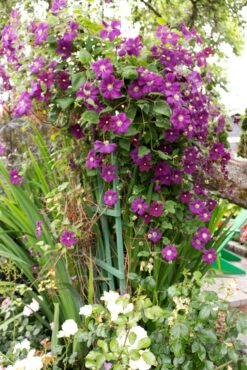 The solution: stacked pavers forming beds of tall perennials with small trees and shrubs to provide a privacy screen. To the left of the driveway entry garden, two palm trees act as punctuation marks, letting you know that you are entering a very special sort of plant paradise. As you near the front door, a bed of ligularia, blue hydrangea and hot-pink-and-white lilies greet you with a profusion of color. 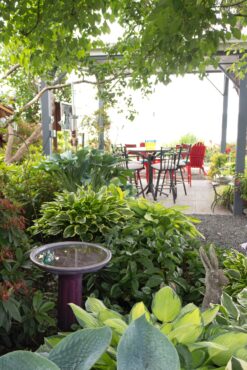 The Kitchen and Cutting Garden

The house was set back from the street a good distance, so the Crosslands decided to design a fenced-in garden there for a kitchen garden as well as for roses and valuable but “deer-bait” plants. Paths were laid out and raised beds were built.

The whole area is surrounded by an attractive fence made of hog wire and capped wooden posts designed to keep the deer out. An antique ‘Josephine’ double clematis climbs on the fence and hardy hedge roses bloom profusely all season long.

A row of Thuja (Arbor vitae) provides more privacy. The trick to establishing a healthy Arbor vitae hedge is to water generously the first year to get the roots off to a good start.

The walls of the house forming the courtyard create a perfect microclimate for overwintering the multitude of Susan Crossland’s large, perennial-filled containers that enhance the garden in the warm season. This is also an ideal place for dahlia beds.

The back of the house, the new addition and the new attached garage form three walls that provide radiant heat while the fourth, open side assures plenty of sunshine. This is where Dave Crossland grows his famous dahlias.

His parents grew dahlias and he has always loved them. Susan received her Washington State University Master Gardeners certificate in Yakima in 1989, so the couple likes to support the Master Gardener program by donating dahlia tubers to the Kitsap Master Gardeners’ annual plant sale. 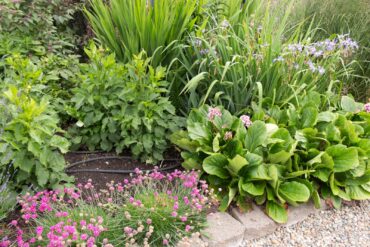 This year, Dave made up 100 bags, six tubers each, to give to the nurses at CHI St. Michael’s Hospital in Silverdale, where Susan works in the pharmacy department. Because of his generosity, he has been dubbed “Dahlia Dave.”

The drying and overwintering of the dahlia tubers is quite a process. After they are dried and cleaned, Dave Crossland separates them into carefully labeled storage bins, where they rest in the garage until spring, when he replants his beds and prepares the ones he will give away. The courtyard is a perfect place for dahlias, which originated in the hot climates of Mexico and Guatemala. 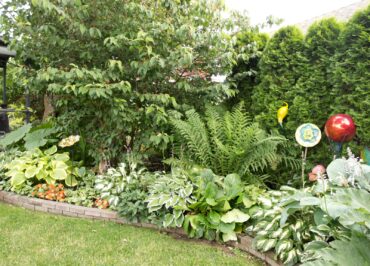 The Crosslands call the water side the “front yard,” as do most people with water views. The area off the deck looks out on a wide sweep of lawn and the view of Dyes Inlet and the Cascades from the top of a cliff.

Borders of lush perennials and annuals edge the lawn on two sides while a pavilion draped with grape vines on the third side creates a wonderful area for summer dinner parties. Colorful Adirondack chairs encourage visitors to stay and talk awhile. Even the Crosslands get a chance to sit there and enjoy their garden every now and then.

Favorite plants in the Crosslands’ Garden

The gnarly trees in the pavilion area became works of art: One is decorated with old bicycle helmets collected over the years and one with Susan’s collection of glass hearts. A third tree supports a traditional, old-fashioned tree swing for their grandson.

Nurseries the Crosslands have frequented

Throughout the garden, there are whimsical touches of garden art, including a collection of glass sculptures that echo the floral colors in the beds and containers. A freestanding, recirculating fountain consisting of a huge, round stone bowl atop an elegant pedestal bubbles cheerfully in a graveled walkway. An exotic birdhouse decorated with antique jewelry adds to the charm of this joyful garden, where there is something interesting to see around every corner. 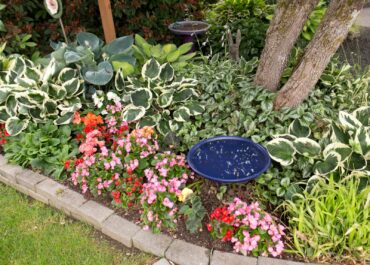 Susan and Dave Crossland have a great love of outdoor games and sports, including kayaking, bicycling, golf and tennis. The garden includes areas for pickle ball, bocce ball, horseshoes and a croquet court on a little lawn in the kitchen garden. Susan recently participated in the national pickle ball championships in Indian Wells, California, where she and her partner won a gold medal in ladies 70-74 doubles.

You’ll often see a credit on the WestSound editor’s page for the beautiful bouquets Susan Crossland creates. Many of Dee Coppola’s photos for her editor’s message have been taken in the Crossland garden.

Susan Crossland says, “My new motto is, ‘Let’s have some fun in ’21.'” Surely, the Crosslands will continue having fun in their wonderful garden paradise for many years to come. 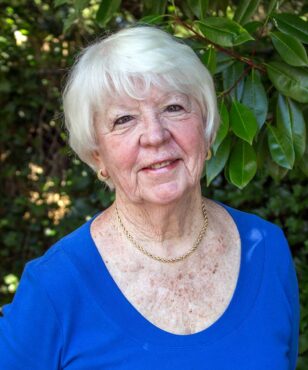