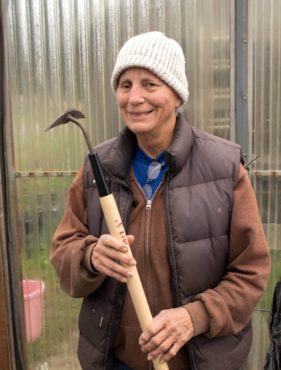 Newcomers and longtime Kitsap residents alike can overlook some of the most treasured local assets: the hard-working farmers and their land. Tucked in here and there on back roads are families who have been in West Sound for generations farming the land, growing food and figuring out how to make farms survive as times change.

Allen and Nikki Johanson’s farm grew out of this heritage. Nikki Johanson’s parents bought their farm on Clear Creek Road in 1949 from Conrad Peterson, who produced eggs — lots and lots of eggs — as a commercial operator. They continued with a smaller egg production but let the egg business go when Johanson introduced hogs and cattle to the farm in 1979. When the couple inherited the farm in 1987, she cleared and cultivated more land, and added basic vegetable farming.

With the 21st century on the horizon, the Johansons opened their gates and invited customers and the public onto their land. They changed the name from Clear Creek Farm to Pheasant Fields Farm and focused on vegetables and eggs. They developed a farm stand, a u-pick pumpkin patch, a corn maze and farm tours. They ventured off-site to sell at local farmers markets, added CSA shares and more recently, joined up with KitsapFresh.org selling their farm products on the internet. 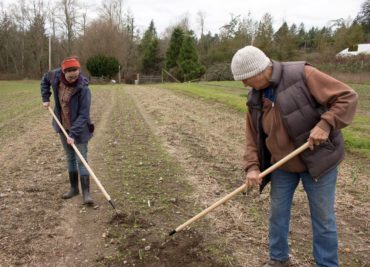 Life is hard work but good down on this heritage farm. Then, disaster came — the family’s special weed cultivators fell apart. These were not just any old cultivators. They were a legacy from Allen Johanson’s father, Art, who developed them over 50 years ago.

It’s a tool with a long handle. Like a hoe. But, it’s not an ordinary hoe.

Nikki Johanson points out that every farmer faces constant weeding. With 50 years of acres and acres of weeding tender vegetables under her muddy boots, she adds that with the right tool, weeding can be almost fun. (Say what?)

This ingenious tool is called a draw-hoe. It’s used while standing erect and sliding it in a back-and-forth motion across the soil like on a shuffleboard court. The curved, pointed tips on the crescent blade angle in and cut weeds close to the veggies’ stems. Other cultivators endanger tender stems when maneuvering close in. As important as saving the plant from mechanical harm is the fact that this draw-hoe also saves a farmer’s back, arms and shoulders because there’s no hacking and digging. 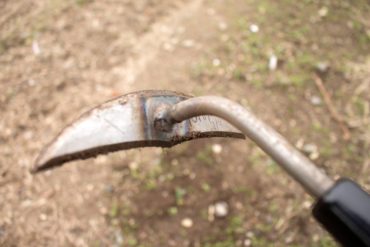 Search as she might, Johanson couldn’t find any tool, either antique or contemporary, that worked as well and held up like the 50-year-old family draw-hoe. So last fall she faced the fact. She was going to have to step up and be the person she was looking for. In other words, she grabbed the bull by the horns and decided to manufacture these draw-hoes herself.

Johanson isn’t the actual inventor here — that’s her father-in-law — but there are plenty of inventors and machinists in her family line, too. She recently learned her great-great uncles in Indiana held an 1868 U.S. patent on a corn sheller. Art Johanson exercised his genius as the head mechanic for Kitsap County’s North-End Road Shop. Years ago, he was featured in Popular Mechanics magazine for another of his inventions. He was a bit of a local celebrity, though he wouldn’t say that.

When Johanson realized she was the proverbial “it” left holding the draw-hoe’s future, she discovered she didn’t have a clue about how to nurture an idea into a full-grown product. Carrots she could grow. But a draw-hoe? 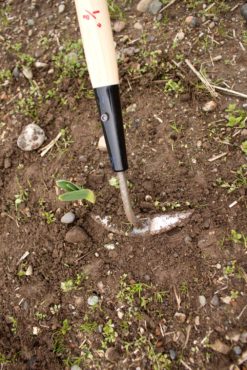 Apparently, the ancestors singing through her blood and urging her into manufacturing also sent her the right crew to make this draw-hoe happen. Given that she only started this venture in September, she’s moving along at a fast clip-clop pace.

Her long-term Kitsap connections came into play starting with her friend, Bev Kincaid, a former grant writer for nonprofits in the county. Kincaid directed Johanson to Jack Gallagher of Sound Resources NW, and Johanson raves about him as an expert business coach. One could say he’s a farmer in his own field — growing startup businesses and guiding Johanson through the arduous, unfamiliar tasks required to nurture an idea. 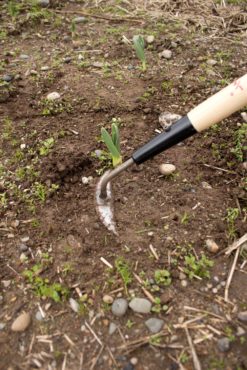 Johanson knew Devin Bodony’s wife, Robin, from a farm internship program of about 10 years ago. Bodony, a machinist, builds mountain bikes known for taking extreme punishment. If he could do that, Johanson figured he was more than qualified to build a tool to last a lifetime. Bodony produced prototypes to determine the perfect steel for the draw-hoe head and ran them through rigorous testing. Production begins soon at his business, Lichen Precision Tool Shop, down a back road in Indianola.

The farm’s new manager, Jori Love, comes out of the advertising and web development field (pun alert). She’ll take on building the website and assist in marketing the draw-hoe, too.

Other than the tool’s handle, ash from Maine, Johanson is proud to bursting that this fledgling company is a complete Kitsap County collaboration. She named the company AJ Heritage Tools in honor of Art Johanson and his simple, ingenious tool. It’s about to fulfill its destiny as a Kitsap County- and USA-made tool, one that helps farmers far and wide put food on consumers’ tables with less wear and tear on their bodies.

Farming is Johanson’s love but she’s also a natural storyteller. She’s cast this unassuming tool into a starring role in a story straight out of Kitsap County’s history. With her agri-business background and excitement about this heritage draw-hoe, it is bound to be sown (er, shown) far and wide.