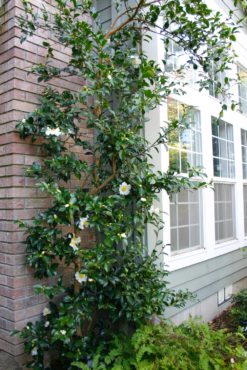 Considered the queen of winter flowers, camellia is beautiful and stately; it reigns in beauty in every season. The shrub’s evergreen presence is quiet and demure when not in flower. But when the weather cools, Camellia sasanqua adorns itself in floral finery from fall to early winter. Even the rose, which bears the title queen of the flowers, can’t live up to camellia’s lovely form.

The earliest camellia to flower, C. sasanqua species and cultivars begin their flowering season in fall. Open and elegant in growth habit, sasanquas have graceful, fragrant flowers. It is surprising to know that the Europeans once thought the flowers inferior to the C. japonicas, and the mindset that the C. sasanqua species were tenderer.

Although Camellia sasanqua has not bumped its rival off the popularity ladder, many people are renewing their interest in the fall- to winter-blooming shrubs. The spreading habit, evergreen leaves and fragrance make them garden-worthy subjects in the Northwest.

As a cut flower, Camellia sasanquas would not be a top choice. The exquisite flowers only last a few days. However, an ephemeral bouquet will work for a festive gathering. Float a few flowers in a bowl of water or cut with the stems intact and arrange in a vase. The next day, when the flowers look like they partied too hard, toss them into the compost heap. 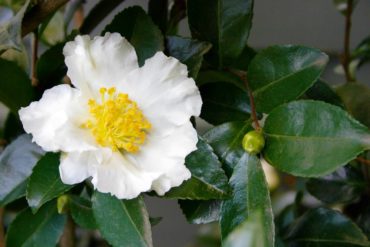 Unlike the classic, later-flowering C. japonicas, which hang on to their spent, unsightly brown, mushy flowers that spoil their beauty, C. sasanqua’s petals neatly fall from the flowers.

The Japanese once valued the species for the seed oil more so than for the flowers. The pressed shiny, black seeds produce a high-quality, clear, slightly fragrant oil used in Japanese and Chinese cooking. However, sunflower and peanut oils have since taken its place. For a high price, you can still buy camellia oil.

In 1735, Swedish botanist, zoologist and physician Carl Linnaeus named camellias after the Moravian Jesuit botanist Georg Josef Kamel. Even though Kamel had nothing to do with camellias, he was honored with the name in recognition of his Far Eastern work. 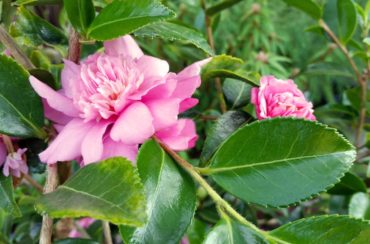 It was decades later before the first Camellia japonicas came into cultivation in Western gardens. Nearly a century later, C. sasanquas were introduced.

Easy to grow if sited properly, camellias need to be sheltered against cold, drying winds and planted in humus-rich, well-drained soil.

Camellias need acidic to neutral soil, with a pH between 4.5 and 6.5. Most of Kitsap County native soil tends to be acidic, except next to sidewalks and foundations or recently limed areas. If in doubt, use a soil tester (found at most nursery and garden centers).

To lower pH, use common sulfur, ferrous sulfate or aluminum sulfate. If your plants have yellow leaves — a symptom of an iron deficiency — use ferrous sulfate to acidify the soil. Sometimes, yellow leaves are symptoms of other problems, such as the plant growing in standing water, lacking fertilizer or being planted in a full-sun position. 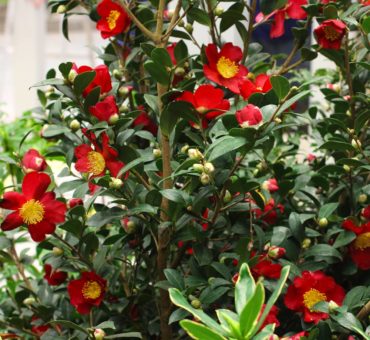 Camellia sasanqua grows well in containers; however, you may need to adjust the pH level if the potting soil is too sweet.

Fertilize your shrubs in spring using an all-purpose, organic fertilizer. Pull back the mulch and scratch the fertilizer into the soil over the roots with a rake. Reapply the mulch. Fertilize again in July. Camellias need a humus-rich soil, so apply compost as mulch every year. Mulching has the added benefit of improving the soil. It is important to plant camellias even with soil level. Be careful with mulch — do not pile it up against the trunk.

This species does not need pruning, unless you opt for an espalier or trimmed hedge. Prune when the flowers are finished and before new growth begins. Take out dead wood; thin and remove crossing branches. The shrub will take radical pruning; however, it will take a few years before the bush will grow out and bloom. While the shrub is young, you can tip prune (after flowers finish blooming) to encourage bushiness.

Tight clipping can be done for a traditional hedge; however, this hedge is not healthy for the shrub and you lose flowers. The best way to grow a camellia hedge is to allow it to have an open, informal form. The flowers will be larger and better form than in a tightly clipped hedge. Plus, the open form allows for better air circulation. Space the shrubs 3 feet apart for a hedge. Choose taller varieties for privacy.

If you do not have much room for a large shrub, you can espalier a camellia on a trellis or a fence. It is not hard to do and you will enjoy your shrub without having to take up too much garden space.

• X ‘Winter’s Joy’: One of many camellias bred by well-known American hybridizer William Ackerman, ‘Winter’s Joy’ is a cross using old hardy selections of C. oleifera with C. sasanqua or C. hiemalis. The plants withstand temperatures below minus-10 degrees with no damage, so perfectly hardy in our climate. A mature shrub stands 6 feet tall by 4 feet wide and covers itself in pink, semidouble flowers.

• ‘Setsugekka’: This camellia is one of the most popular cultivars of unknown parentage from the species sasanqua. From October to January, it presents a spectacular bloom with semidouble, pure white, undulated petals and prominent golden stamens. Its 8- to 10-foot-tall, upright form is perfect for espalier.

• ‘Yuletide’: Out of California came this chance seedling of ‘Kanjiro.’ Sometimes referred to as the Christmas camellia, ‘Yuletide’ provides its own ornamentation for the holidays with its brilliant-red flowers and highly visible golden stamens. This selection is good for hedges or espalier specimen. The shrub grows 8 to 10 feet tall and wide.