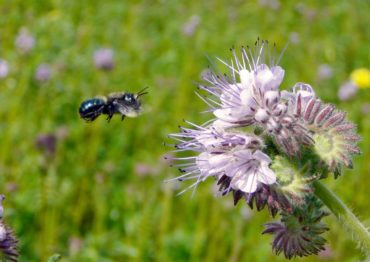 The orchard mason bee, also known as the blue orchard bee, is the Western native pollinator that appears each year in late winter and early spring to pollinate the early-blooming fruit trees and flowers. Its scientific name, Osmia lignaria propinqua Cresson, describes the insect order to which it belongs and also includes ants, bees and wasps. The orchard mason bee is native to North America and has an Eastern U.S. cousin.

This all-black bee is easy to spot in late winter and early spring as it buzzes around, looking for nesting holes at your house and for nectar-producing flowers to feast upon.

With many of the other native and honey bee populations in trouble due to a mite called krombeini Baker, it’s even more important to provide proper shelter for the mason bee. They are the best pollinator in the world of bees. The mason bee will pollinate effectively 1,600 flowers per day, whereas a European honey bee will visit 600 to 700 flowers per day but only pollinate 30 of them (a dismal 5 percent success rate).

The mason bee cycle begins when temperatures outside reach 50-55 degrees in late winter or early spring, which encourages the male bees to emerge from their cocoons. They operate for a few weeks to build up their strength and then the females emerge. A brief mating ritual occurs and her work begins.

She will move from tree to tree, shrub to shrub, thus actively cross-pollinating the fruit. Her first effort is to gather some mud to pack into her first nesting chamber as a support wall. The bee then makes 15 to 20 trips gathering nectar and pollen, which she packs against the mud wall. She enters the cavity and lays her first egg, pushing it into the nectar and pollen mass, and then gathers more mud to close off the first chamber. This continues as she lays 32-36 eggs in her life cycle.

Most fascinating is that she will determine the sex of the egg, laying female eggs deeper in the protected holes and male eggs out front. When she is impregnated, she has a sperm sack in her body and only releases sperm to her eggs when she knows it will be safe. When sperm is released from her sack, she has created a female egg.

The deeper the hole, the more female eggs are produced, so it’s best to use the 6-inch-hole cardboard straw system with a white paper straw inside the protective thick cardboard tube for your housing. The beauty of the cardboard with liner is that you can change the liner each year, thus eliminating any predators that may be residing in your mason bee homes. After years of study, it was determined that a 5/16th-inch hole is preferred by the mason bee.

Word of caution: Do not use the old 3 1/2-by-3 1/2-inch wood block (drilled holes) method of providing housing for your backyard mason bees, unless you make the drilled holes 3/8 inches and put paper liners in the holes. Brian Griffin of Bellingham, the author of “The Orchard Mason Bee,” found the krombeini Baker mites in his old drilled-hole wood blocks about 15 years ago and realized they were clinging and adhering to the wood of the block.

Trying to develop clean-out systems for the blocks proved ineffective. As a result, Griffin, with assistance from Philip Torchio of the U.S. Department of Agriculture and Utah State University, designed the new cardboard-and-paper liner system used today.

Some cardboard tubes on the market are rather thin, and the driller wasp (or chalcid wasp) can bore through the cardboard and liner into the mason bee cocoon, laying its egg perfectly inside the cocoon of the bee.

Always place your mason bee homes in a sunny, easterly or southerly location, so that they will get the early sun. Have a little rain cover over the straws, just so that the cover won’t block any sun but will stop some of the spring rains.

Don’t make the mistake of putting your straw systems on the fruit trees: As the fruit trees leaf out, they will block the sun and your bees will not get the appropriate 50- to 55-degree temperatures to be active.

This non-aggressive, solitary bee is considered a nonstinger. Even though the female has a stinger, it’s nonlethal for those who may be highly allergic to bee stings. Their only interest is in food and egg production and they are fascinating to watch as they bump into you while you observe their activity.

Place bees and their housing system in a sunny location at the end of February or early March. Provide a nice mud puddle near housing area and mist daily.

By mid-April or so, all bees should have hatched from their cardboard tubes. This could be a good time to pull out all old liners and open them up to ensure all bees have hatched. Replace with new paper liners.

Between April 1 and 15, keep an eye on your housing area to ensure you have enough clean tubes to accommodate your growing population of bees.

During the first two weeks of July, take your bee houses down and tuck away in a cool garage or shed to protect them from predators such as birds and other insects.

In the second half of September, the cocoons will develop into mature, full-grown mason bees.

Between early October and end of January, you can perform a random sample of your bees by extracting cocoons from 5-10 percent of your cardboard tubes with paper liners. This will ensure you have a viable population, void of mites or other insects laid within the mason bee tubes. Krombeini mites will appear as a mass of dried, yellow powder within a sealed section of the tube. Dispose of them from the nesting area.

Replace the paper liners with new ones, and you are ready for the new season. During the sampling, if you find few problems, you can proceed to remove all the filled liners and replace with new paper liners for next year. Put the filled paper liners in a shelter or container and they will be ready to hatch in March of next year.