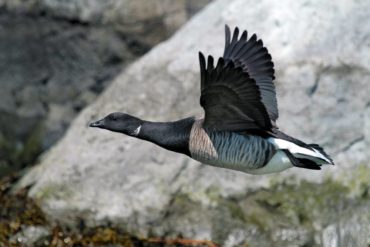 Depending on their numbers, the popularity of geese can wax and wane. It’s the Canada geese that produce these mixed feelings. Brant geese, their much smaller cousin, is looked at in an entirely different way. Some even think of this goose as “cute.” At close range, the dark, shining eyes of the brant have a puppy-like quality.

This diminutive goose isn’t much larger than a mallard duck. Where they have become comfortable with humans, they not only will eat from a person’s hand but also have good manners. A brant gently nibbles at the grain or bread offered while the large Greater Canada goose may choose to bite the hand that feeds it.

Brant geese winter in Western Washington but their numbers swell during the spring migration. There are several locations where they can be seen during the colder months. In the West Sound region, these include small bays and inlets as well as the beaches along Hood Canal.

Once the spring migration begins, their population swells into the thousands. Birds move up the entire West Coast from wintering areas as far away as Baja, California, and spread throughout Western Washington.

The movement of brant begins in late February and numbers peak in the Northwest by April. The majority of the geese head for their northern breeding grounds in Alaska, Northern Canada and the Arctic by early May.

Padilla Bay near Anacortes is a major West coast staging area. Their numbers grow as more and more birds move up the Coast and into this resting and feeding area. Unlike Canada geese, brant are never far from salt water and that’s why their numbers are higher west of the Cascade Mountains.

Other factors influence where brant can be seen. Their main food is eelgrass and, to an extent, sea lettuce. Shorelines where favorable conditions encourage this food to grow attract brant.

Shy around human activity, they may withdraw from areas where they once were common. They also need gravelly stretches of beach where they can “gravel up.” Fine gravel and sand is needed in their gullets for grinding up and digesting what they eat.

Gravelly beaches and eelgrass beds are historical stopping and resting areas. They not only visit these habitats during migration, some birds winter on them during the colder months. 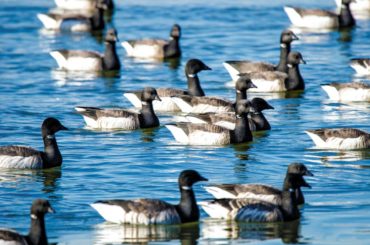 One of the best local places to observe brant in the spring is on the west side of Hood Canal. Oak Bay County Park spans both sides of the waterway between the mainland and Indian Island. Brant arrive every spring and stay for several weeks on this protected beach. They also congregate on nearby Marrowstone Island at Fort Flagler, where their numbers grow even larger. They are found regularly on the gravelly spit on the park’s inland side across from Port Townsend.

At one time, brant were considered two different species, i.e. black brant and brant. The former is the bird found along the West Coast and the latter was seen in the eastern part of the country. The primary difference between the two was the color of their undersides. Black brant had the darker bellies and brant had grayish bellies.

Most of the black-bellied geese are the race seen in Western Washington. One exception is the race wintering in Padilla Bay. These are birds with lighter bellies.

Where large numbers of geese are found, their nonstop communicating can reach an impressive volume. Brant, however, speak more softly than other geese species. Their call has been described as a low “krr-onk, krr-onk” or a throaty “cr-r-r-ruk.” Several hundred or several thousand geese communicating in this manner announces their presence to any observers in the area. Unlike the cacophony made by flocks of Canada geese, a flock of brant sounds more like a loud purr or mutter.

The common name given to this small goose is from the German word “brand.” It means “burnt.” This is a reference to the dark coloring. The species name, “bernicla,” is Norwegian for “barnacle.” An ancient Nordic tale told of these sea geese hatching from the barnacles clinging to driftwood.

The brant’s strong attraction to salt water even influences their nesting habits. A shallow hole on the Arctic tundra is lined with feathers and located only a few feet from the tidal zone. Strong Arctic storms can have a serious effect on the success or failure of an entire nesting season.

Several important factors influence the health of a bird population, including protective habitat, nesting habitat, food and water. Brant are dependent on a healthy supply of eelgrass, their main food source. Where this has been destroyed or greatly diminished, portions of the brant population have had numbers drop to a point from which they never recovered. Knowing where eelgrass grows is the best clue for viewing the spring migration of these attractive and personable sea geese.