Winter is the best time to think about birdhouses. The birds are starting to think about where they will nest once spring arrives. Where houses are already in place, it isn’t unusual to see chickadees exploring them in January and February.

They may decide to nest in one or they may be checking on what the former occupants left behind. These industrious little nest builders will go through last year’s nesting material to see if they can salvage some for this year’s nest.

Several factors need to be considered once “house hunting” begins in earnest both in February and March.

It is important to know which birds will actually use birdhouses. Some birds are cavity nesters and those are the ones that will use manmade birdhouses. In the wild, they build their nests in tree cavities after removing any rotting wood debris.

Woodpeckers are cavity nesters that hammer out or enlarge natural cavities. Even larger birds like owls, wood ducks and hooded mergansers nest in hollow tree cavities or manmade nesting boxes.

Other birds build their nests in trees, bushes and even on house structures. Porch lights, exposed beams, hanging baskets and planters are popular locations.

A limited number of species accept manmade birdhouses. Three of these are familiar birds that are also frequent feeders. Among the most common birdhouse inhabitants are the chickadees and nuthatches. They are both attracted to the same house details, and competition can be fierce.

Another species attracted to birdhouses is the house sparrow. Formerly known as the English sparrow, this introduced, non-native bird will drive out other birds and their young. For this reason, the entrance opening on a house designed for chickadees and nuthatches is important. It should measure 1 1/8th inches across. Many houses are built with 1 1/4 inch openings and that size allows the house sparrows to take over the structure.

The height of the entrance above the floor is another point to consider. If the opening is only 2-3 inches above the bottom of the house, there is a danger of the young birds falling out of their nest.

As they grow and become larger, they also become very active when competing for the food the parents bring to the nestlings. Whoever gets its mouth higher than the others has the best chance of getting fed. The older the nestlings become, the farther out of the opening they will poke their heads. 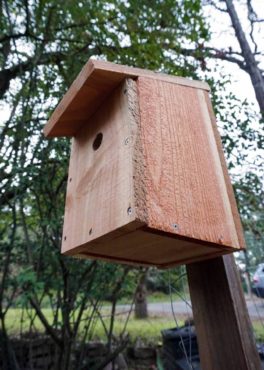 The placement of a birdhouse is important but birds often nest in houses placed in less than perfect locations. Even those birds that don’t use birdhouses may choose some unlikely places to raise their young.

Porch lights are popular with barn swallows but flycatchers will also build on them. Robins are attracted to horizontal boards and beams even though most of the time they locate their nests in trees and large shrubs.

One record noted a pair that built on the steps of a ladder leaning against a wall. Another mentioned them building in a large clematis vine growing on a trellis mounted in a large planter. Gardeners throughout the West Sound region will be faced with house finches and dark-eyed juncos building nests in their flower boxes and hanging baskets this coming spring.

Birds attracted to birdhouses also move into locations that may not be perfect but they can be influenced by certain factors. Chickadees will nest in houses that sit no higher above the ground than 5 feet. However, they prefer to nest much higher.

When the houses are mounted 15-20 feet above the ground, the competition for one increases. How accessible a house is to predators is critical. This is the primary reason why a house swinging from a tree limb often goes unused. It’s too easy for cats, squirrels and raccoons to reach the box and the inhabitants.

A birdhouse mounted high on a post that can’t be climbed won’t be on the housing market very long. This is more difficult to create but the reward will be a birdhouse that will be used year after year by both nuthatches and chickadees — chestnut-backed or black-capped.

Which way the house faces also influences the tenants. It should be faced away from the prevailing winds. The feeding adults land into the wind and don’t want it at their back. A house faced toward the morning or afternoon sun stands a better chance of being used than one facing toward shade. This positioning mimics what birds choose when nesting in the wild.

One more point to take under consideration is the fact that nesting birds are very territorial. They won’t tolerate another bird of the same species nesting anywhere in the vicinity of their nest site. Additional birdhouses should be out of sight in another location, at least a hundred feet away. Even that can be too close, depending on the nesting bird’s territorial fervor.

Black-capped and chestnut-backed chickadees along with the red-breasted nuthatches will be well into their nesting activities long before you become aware of them. The earlier the birdhouses are in place, the better the chance of attracting some residents to enjoy all spring.