His, Hers, and Theirs — Divide and Garden

The color of the body of the house is an intense purple that leans toward violent red-violet. Called “Fabulous Grape,” the color suggests a grape candy so aggressively saturated with color that only a child would eat it. Light, sage green trim and decks soften the intensity. Johnson chose the colors.

Purple also dominates the front border with sweeps of lavender, deep purple phlox and purple-leaved varieties of barberry, ninebark and black elderberry. Palmer-Davis designed this part of the garden.

The house and garden harmonize beautifully. In fact, the major trees and shrubs threaded throughout the property weave such a unifying theme of purple accented with lime-green or gold foliage that initially one doesn’t notice two very different design sensibilities at work.

Johnson and Palmer-Davis met in the early 2000s when they were both recently retired, she from the social work field, he from computer systems support. When they decided to merge their households in 2005, they moved into the small A-frame that Johnson had bought as an investment a few years earlier.

Aside from a sweeping view of Hood Canal and the Olympic Mountains from the second-floor deck, the house and property were — well, “unpretentious” would be a compliment. The interior needed a complete remodel.

And to make something of the derelict yard, they would need a way to accommodate their disparate garden preferences. Palmer-Davis loves perennials, brightly glazed Mexican pottery and lots and lots of color. Johnson embraces conifers and maples, a Northwest-forest look and Asian garden style. How would they find common ground? 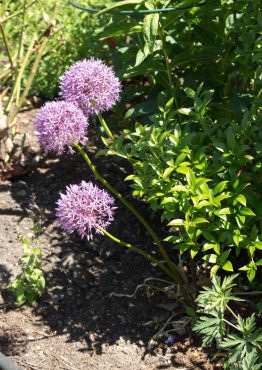 They agreed to divide and garden. With a good dose of whimsy.

In the beginning, after the interior remodel of the cottage was completed, Palmer-Davis went to Mexico for three weeks.

“I took this whole north side and planted it while she was away,” Johnson said.

Adding to the garden while the other partner is away has become a running joke between them. “If there’s an email that floats in the middle of your trip that says, ‘I have a surprise for you…'” Johnson said, laughing. “That happens quite a bit.”

“Oh, yes,” their good friend and neighbor, Laureen Davis, confirmed with a grin. “They know that when they leave town, anything can happen.”

Eleven years later, their dual-personality, his-and-hers garden drew oohs and aahs on the 2016 Hansville Garden Tour. Palmer-Davis’ lust for color rules the sunny front and the south sides of the house. Johnson’s Northwest/Asian aesthetic reigns in the shadier areas on the north side and under the front deck. They jointly garden the veggie beds, located behind the house.

“I do gravitate toward a lot of purple,” admitted Palmer-Davis.

Johnson added, “You are either meant to be here and thrive on your own, or you’re out of here.”

Tough intentions, but not without mercy. Witness that Joe-Pye weed, which gets the extra water it needs to keep it from drooping. And the rhododendron they just didn’t give up on — Johnson said “it has been in four different places, and it’s always been ratty.” It was too ugly to donate to a plant sale last spring, so they put it in a tub on the north side of the house. “And we had gorgeous blossoms for the first time,” Palmer-Davis said.

In the garden, inverted truck hubcaps hold tapestries of assorted succulents. Small, colorful pots of succulents adorn the sides of the back deck. Tender ones, like Echeveria ‘Topsy Turvy’ and string of bananas plant (Senecio radicans), overwinter in the greenhouse.

In the near backyard, a shady bed along the north side of the freestanding garage is mostly hers. Palmer-Davis, an accomplished and creative quilter, has a quilting studio built into the back portion of the garage.

They often kid each other about “incursions” into each other’s domain. But they seem to good-naturedly make exceptions when the best conditions for a treasured plant are in the other one’s garden.

Although Johnson helps with the labor in her perennial-heavy landscape, as the years creep up, Palmer-Davis is beginning to rethink some of her plant choices. She spoke of shifting toward more evergreen shrubs and groundcovers, “which is going to be tough,” she said, “because I love color.”

All three, plus conifers, abound in his gardens.

In a manner reminiscent of birds that occupy different levels in the forest canopy, Palmer-Davis has planted shade-loving perennials in the spaces under the trees. “I tolerate it,” Johnson said with a laugh.

His most Zen-inspired garden is behind the garage. A fence with a wide, open gateway separates it from the vegetable garden. Stepping through this gateway, one feels an immediate energy shift. Three broad steps lead up to a 12- by-14-foot patio made of smooth, gray, 2-foot-square, concrete pavers. This is Johnson’s tai chi practice space.

On one side of the patio, a fountain burbles over the rim of a tall, chocolate-colored pot, the water vanishing into a bed of river rock. The fountain sits in a gently undulating landscape of ‘Cappuccino’ Asiatic lilies; tall and dwarf conifers with blue, green and gold foliage; Japanese maples in a myriad of sizes, shapes and colors; and small rhododendrons. In spring, big clumps of deep-blue Japanese iris bloom. Low thyme spreads a purple-flowered carpet in summer.

On the other side, a path of wood chips winds between pines and rhododendrons, past an inviting wooden bench, then slopes downhill to a stone-slab bridge to cross a dry rock stream. The dry stream “flows” into a “pool” of fine sand in front of the bench. A statue of Kwan Yin, the Buddhist goddess of compassion, sits in contemplation beside the pool, under the shade of a peely-bark Stewartia.

Lest one begin to feel too serious, a purple dragon stands guard in the thyme. About 2 feet tall, with a row of purple spines down its S-curved neck, copper-color breast scales and spiky wings, it rears up on its tail, standing on two very thin metal legs.

There’s something familiar about the underlying shape of it. Johnson hinted, “It used to be pink.” Transformed by a local artist, the dragon is called “Flamingo Incognito.” The artist, quipped Johnson, “let its inner soul come forth.”

The vegetable garden is largely a joint project. With three raised beds and a greenhouse, they grow assorted vegetables, herbs and strawberries. A large rhubarb planted in the ground is a particular favorite.

“Denny makes a rhubarb liqueur which is outstanding,” Palmer-Davis said.

He bakes rhubarb crunches and pies. She puts rhubarb in jams with other fruit. “Or just plain stewed rhubarb — brings back childhood memories,” she said. By an odd coincidence, they each grew up in towns of 2,000 in eastern Iowa.

A sign in the vegetable garden, another of Johnson’s finds, reads, “Feel free to talk to the plants. They understand.”

In a small bed of yellow-flowering sedum, five cobalt-blue beer bottles are planted bottoms up.

“It’s cemetery markings for a past party,” Johnson jokingly said.

Palmer-Davis explained, “We were watching a football game, and one of the ads was for a new beer in cobalt-blue bottles. Well, as soon as the game was over, I went to the grocery store and bought a six-pack. I don’t drink beer, but I wanted the bottles!” She tends to see possibilities in unexpected places.

Looking back recently at a photo that Palmer-Davis took of their place late in 2005, Johnson said that it reminded him of “red-neck” places he saw in Mississippi and Alabama in the 1960s.

“Funny how none of my pics brought this out, but hers did… I was constantly brushing off how the house looked because the way it looks now was what I saw in my head,” he said. “Ten years after the fact, maybe I now have a glimpse of what must have been going through her head when we took this on.”

And take it on they did. Together, the couple crafted a total transformation of the property. In doing so, they’ve given each partner space for self-expression, threaded it all together with shared joys and loves, and kept the laughter alive with plenty of whimsy.