A Garden for Refuge — and Time with Friends 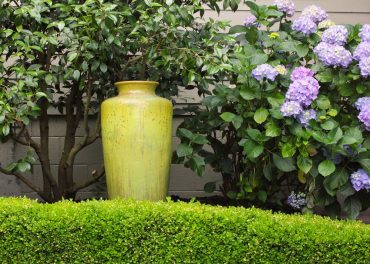 When a couple lives in the oldest known surviving home in Gig Harbor and has a partnership in the creation of a garden together, great things come from it. When Cindy and Dave Storrar moved into their home on Pioneer Way overlooking the harbor in 1998, they began their garden immediately.

Cindy Storrar reminisced about their first year in the house.

“There was nothing in the garden. There was grass and a plum tree in the back and of course the fir trees were here,” she said.

One of their first projects was installing a French drain to take care of the drainage problems. Storrar chuckled when she said, “We had a hill full of springs.”

The couple see themselves as partners in the garden. It takes each of them about 10-12 hours a week to maintain the garden. 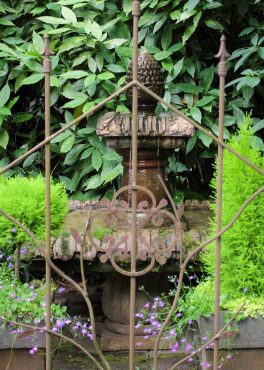 “I do a lot of the design and Dave does a lot of the hard labor. He also has a good eye for plant material,” Storrar said.

Together, the couple built the gardens up around the house. To make way for an overpass in the 1950s, the home had been moved from its original site near Kimball Drive to Pioneer Way. Their designs visually anchor the home to the property, where it’s hard to imagine the house had migrated from another location.

“We love being out there,” Storrar said about working in the garden. “It’s a stress reliever and peace of mind, and we can be out there for hours. Sometimes we have to remember to go in and eat. We do love it, because for us it’s not a chore. Dave just retired so he’s able to have more time to do some of the projects that he’s wanted to do.”

The garden has some eclectic elements to it — from formal knot gardens to more casual plantings in other areas. Yet there are cohesive elements taking visitors from one area to the next.

Boxwood (Buxus sempervirens ‘Suffruticosa’) is used extensively. In one area, the shrubs are pruned into short hedges that meander through the garden. Some are pruned into round shapes. Yet in another area, the boxwood forms a knot garden that surrounds an ornate pot.

“The boxwood helps define the beds and gives them order,” Storrar said. “Behind them, we can have more color and be a little wilder because the boxwood keeps the garden tidy. As your eye follows all the boxwoods, I think it gives the garden more order.” 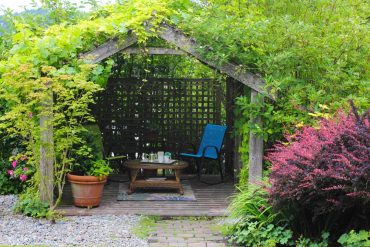 The boxwoods are trimmed once a year — since they are the dwarf variety, they don’t have the big growth spurts.

Storrar uses large pots extensively for a pop of color or focal points in a border. The oldest pot stands in the knot garden.

Clever repurposing of many items made the 9-by-7-foot shed built by Dave a charming structure that resides over the back garden area.

The Storrars collected old windows, including a French door that came from a French barn. When they remodeled their house, they reclaimed the white plank siding and repurposed it for the shed’s floors and walls. Items recycled from their house during a remodel made the shed extra special for them.

Storrar uses the shed year-round by heating it in the winter.

“I really enjoy a place to go out and have a cup of tea out where I can see the garden,” she said.

And she uses the shed for so much more — to store seeds, fertilizers, potting soil and such.

“I start plants in there in the spring because I have those windows right there,” she said.

One of her favorite tables in the shed is a potato sorter the couple found by the side of the road. The bins underneath are used for storage. The top is made from wood and has a sheet of glass over it. The couple sandwiches pictures of the garden and postcards in between. The table is utilized for most of Storrar’s prep work.

Many water features are spread around the property.

“We have a busy street out front on Pioneer Way so the water features distract you from the street noise,” Storrar said. “It’s just kind of soothing. We have one up on the deck and two others in the back, even though it is a much quieter area back there.”

The Storrars enjoy the birds that visit and live in the garden. Although the couple stopped feeding them so as to not attract rodents, they do provide water. With the shrubs and trees they planted, they’ve created a bird paradise.

“We have the Anna hummingbirds year-round and they love the tiered fountain in the back where our patio is.” Storrar said. “They belly up to the top of it where the water is moving and love it. They are also very comfortable in our yard. We can be sitting at that table having dinner at night and they are just right there. The garden supports a lot of birds that nest here in the spring.”

The first structure that Dave built on the property was a gazebo. Behind the outbuilding there are red-and-yellow twig dogwood (Cornus sanguinea) and snowberry (Symphoricarpos albus), planted originally for privacy. The gazebo is covered by grapes and hops, with an unknown rose softening the corner.

Along the fence line, the soil stays wet so the Storrars looked for plant material that can take the moist conditions. Besides the shrubby dogwoods and snowberries, they planted blueberries and hydrangeas in the wetter areas of the garden.

“Almost totally closed, it’s like a little cavern,” Storrar said. “A candle chandelier hangs from the ceiling and we keep a couple of chairs and a table down there. When we sit down and look back at the garden, we get a totally different view of the gardens instead of looking out toward the water. It’s quiet even though we’re on the busy street side. The plant material muffles some of the sound. You have to have some of those destinations in the garden where you can sit and enjoy it.”

Storrar said they always want to try something new. This coming season, the couple plans to put in some metal troughs for vegetable gardens.

Their long-term plans for the garden? Storrar said with a laugh, “No major overhaul plans at this time but we are gluttons for punishment — we are always coming up with something.”