May 19, 2016 - Featured, The Garden - Comments:
Text by Peg Tillery Photography by Molly Shurtleff and Steve Horn 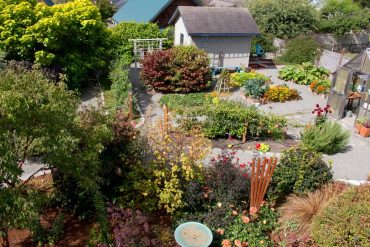 The garden of Gretchen Lee is filled with delights for the senses. It exudes peacefulness in many areas but also includes raucous, gleeful rampages of colorful plants in others. She has created garden rooms throughout the landscaping surrounding her home in Hansville. 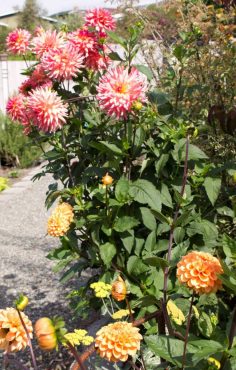 “The back part was totally untended earth. The previous owners just mowed whatever came up,” Lee says.

In 2001, Lee began planning and designing the garden rooms surrounding the rest of the home, each with its own flavor. She was unstoppable until the whole property was created into a feast for the senses. 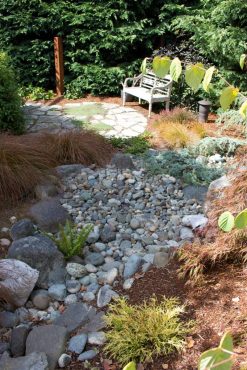 Structure has been accomplished through arbors, trellises, fencing and also lots and lots of trees and woody shrubs. There’s also plenty of space created for growing edibles, with espaliered fruit trees (apples and pears), small fruits (berries and grapes) and, of course, a vegetable garden filled to the brim with edibles. In addition, Lee has a garden shed and a greenhouse, as well as an area set aside for staging and storing plants, pots and other equipment.

In 2006, after her husband’s death, a complete remodel began on the front yard, which was mostly grass.

“I don’t do lawns or mowing and wanted to get rid of all the grass if possible,” Lee says.

She was encouraged by fellow Flotsam and Jetsam Garden Club member Mary Booth, a retired landscape architect, who told her, “Let’s create a patio.” 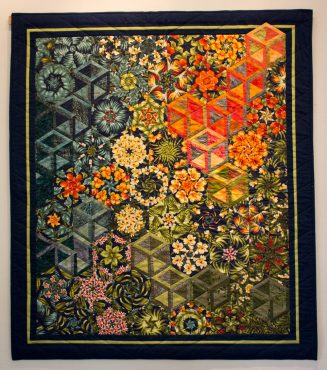 “I purchased two full bins of Oklahoma Sandstone. I had no idea how much flagstone that would be,” Lee says. “It was soon shared with others, after hardscaped paths and a patio were constructed.” 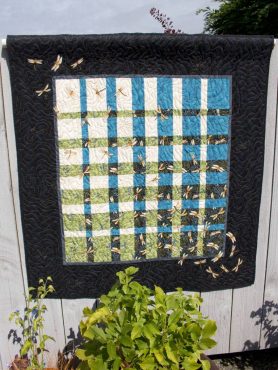 Colors and textures are woven throughout the landscape. Lee has an area with sunny colors like red, orange, yellow and gold. Next is the purple-and-black area enhanced by both leaves and berries.

A shady area showcases glowing, white flowers and foliage. Not to be forgotten, there’s also a section filled with fragrant plants. Tucked away on one side of the home, concealed behind large, evergreen shrubs and bordered by a solid fence, is the memorial garden in Bill’s honor. This area has a soothing, Zen feel.

Perhaps Lee’s garden is her way of creating beauty, hope and peace out of some unfortunate life circumstances. Her husband was 10 years her senior. They always knew he’d pass away first and spent their lives together accordingly.

Four years after he died, Lee was diagnosed with stage IIIB lung cancer and given six to nine months to live. That was in 2009. She credits her survival to the positive attitude of her oncologist, Dr. Ann Murphy, who is now in Port Townsend. Friends say that Lee is the most positive person they know.

During cancer treatment April through June 2009, the garden club ladies gathered around her and took care of her garden. One of those women was Ann Jones, who enlisted her son, Ian, to assist. To this day, Ian Jones still works for Lee but now he has his own business and is so busy, he isn’t taking on any more clients. 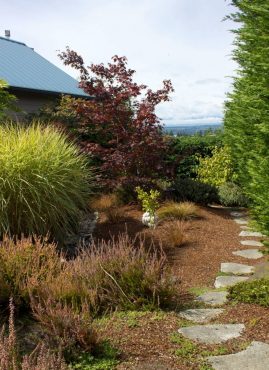 More than a Gardener

Lee is one of the original members of the “Boot Scootin’ Grannies,” formed in 1996. Flotsam and Jetsam Garden Club met in the Driftwood Key Clubhouse during that time. Several of the members, including Lee, decided they needed to be in better shape. They originally used Jack Lalane exercise tapes while meeting at the clubhouse.

“We started taking country line dancing classes every Wednesday night at the Clearwater Casino in the Bubble, followed by Western dance,” she says.

They enjoyed the dancing so much, the group started creating their own routines.

“Our original teacher saw us dancing and said, ‘Those don’t look like the dances I taught ya,” Lee says, and adds, “Creating the routine and dancing is really good for your mind. We had to think and remember and learn.” 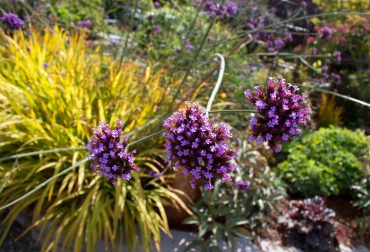 One room in her home is her quilting studio. Several walls throughout the house are used to display these lush and striking pieces. It’s only fitting that they claim center stage.

She meets regularly with three fellow garden club members who are also quilters. Each year in February, their works are displayed as part of the Flotsam and Jetsam Annual Art Show. Their group is called GL Squares (symbolized by the letters GL with a hyper 2) for the first letter of their names. The Gs are Glee Palmer Davis and Gretchen Lee and the Ls are Lenore Lynch and Lisa Estep. 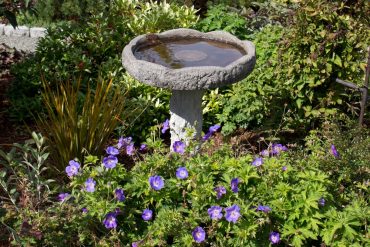 The Rest of the Story

Lee grew up on a farm and avoided gardening as much as she could.

“That was manual labor,” she says.

Work took Gretchen and Bill on many journeys and homes in numerous locations in their adult lives so they didn’t garden. But when their daughter, Amanda, was 11 years old, she wanted to grow vegetables and there just happened to be a vacant lot next door where she could plant away.

“That lasted only two years, then puberty hit,” Lee says. That was the end of her daughter’s gardening and Lee took over from there. 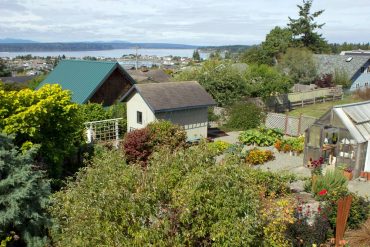 “It was mostly to grow veggies but I did do a permanent strawberry bed there, and I have one here at my home now,” Lee says.

Upon retirement, when the Lees moved over to Hansville from Seattle, they finally had time to garden. However, the land at their first Hansville home was pretty barren, with not a lot of space or good soil on which to garden. The gardening bug hit full force though when the couple bought the current home and there was no stopping Lee in planning, planting and developing their gardens.

“Bill did not garden and he didn’t know one plant from the other and I didn’t let him near my garden beds,” Lee says.

She recalls how a young, out-of-work neighbor, Sherwin Elveord, was hired to help move literally tons of soil from the top of their property to every conceivable area in the back gardens. 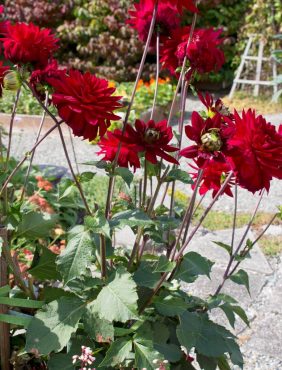 Elveord still lives up the street but has moved on to other jobs now, and still stops by to see how the gardens are doing.

Plans for the Future

Gretchen Lee’s gardening legacy is living on through daughter Amanda, whose Seattle garden was on the West Seattle garden tour of 2013. That garden continues to thrive and enthrall others.

“I remember what year the tour was because I spread bark in the pouring rain. She owes me so big,” Lee says.