A Gardener’s Take on Dr. Seuss

Welcome to the Dr. Seuss-inspired garden of Ron Gillespie.

“When I think of Dr. Seuss, I think of fluffy things, and I think of tall things that stick out, and weird-shaped branches,” Gillespie says.

Gillespie, a retired history teacher and school administrator, is a native of Bremerton. His father was a music director in the Bremerton School District and later principal at Bremerton High School. In addition to a love for education, Gillespie inherited a passion for gardening; both his parents and grandparents were avid gardeners.

In 1970, Ron Gillespie bought his property of 1 1/3 acres just east of the water in Tracyton, slowly building it into the luxuriant and eclectic garden it is today.

“I like to create a new garden bed each year, but Joyce says I’m getting’ old,” he says, laughing. 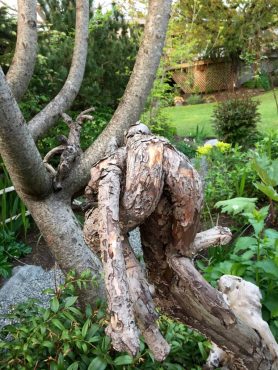 Joyce Merkel, his significant other and fellow gardener, has been photographing the garden’s evolution over the years. Some of the garden rooms he’s created include a vegetable garden, Mediterranean garden, fruit garden, shade garden, rain garden and, of course, the Dr. Seuss garden. 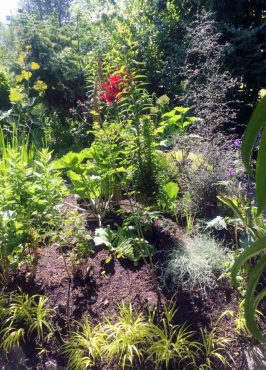 So what inspired the Dr. Seuss garden? “Well, I’ve always liked unusual plants and I was never allowed to plant them where I wanted to, so I created an area,” Gillespie says with a grin. “Like that corokia — there’s not much to it but I love that tree.”

He points to a 5-foot-tall specimen of Corokia cotoneaster. Known for its zigzag, bizarre branching pattern, this New Zealand native looks almost skeletal all year, thanks to its slim, contorted, reddish-black stems and sparse, tiny, oval leaves. When asked which came first, weird plants that inspired naming it the Dr. Seuss garden, or a love of Dr. Seuss books that inspired a search for weird plants, Gillespie replies that the illustrations inspired the garden. 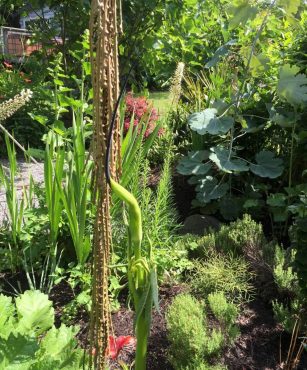 “I was intrigued because I thought they were neat. It was sort of a creative way of looking at plant growth,” he says. And the garden, indeed, harbors giant leaves, snaky branches and stems that shoot skyward with tufts at their tops. 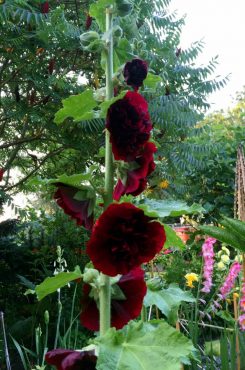 Gillespie wanted to create a space enclosed by vegetation, a kind of secret garden filled with unusual shapes, textures, smells and lots of color. And by midsummer, foliage does completely enclose it. Two large fig trees guard the entry path with a curtain of their classic big leaves. To enter, one must part the branches and duck under.

Inside, a gravel path circles a center bed. A hedge of fragrant mock orange forms the south wall. Evergreen clematis on a trellis creates the west wall. Other enclosing plants include a sweet-smelling star jasmine, a culinary bay laurel, a sumac tree and a Chinese fir.

The Dr. Seuss garden began with the clematis trellis, which Gillespie built to screen his view of the neighbors. 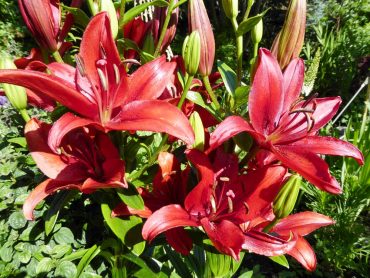 “My neighbor gave me some starts and I healed them in there, in the sunniest part of the yard,” he says.

Then he healed in the sumac tree until he could plant it in a permanent spot. But the yucca and sumac took root in their temporary digs.

“This happens to me a lot. I did the same with that sequoia out in front,” Gillespie says, laughing about the giant tree by his driveway. “I literally built around the sumac and around the yucca plants.” 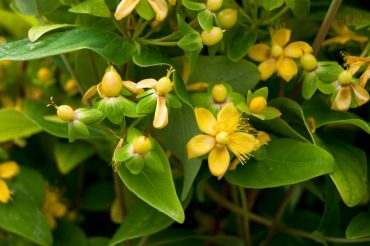 The next Seuss garden resident was the Chinese fir, which Gillespie points out is a relative of the monkey puzzle tree. But unlike the clawed scales of its monkey puzzle cousin, it has needles reminiscent of a grand fir, yet somewhat more exotic-looking than a true fir.

Over the years, Gillespie has frequented specialty nurseries and plant sales at Bloedel Reserve and the restored Heronswood to populate the Dr. Seuss garden. Many of his finds are tall, topped with arresting blooms, like the Himalayan lily that grows to 13 feet, huge tropical cannas and 6-foot-tall lilies. 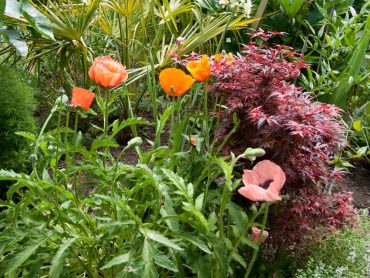 Other residents have “fluffy” flowers, like plume poppies with their frothy inflorescence, fox-tail lilies and alliums with their pompoms. Giant-leaved plants like podophylum, rheum (pronounced “room,” a rhubarb relative), cardoon and elephant’s ear add to the playful effect. Some plants gained entry because of their smells, like the honey bush, whose leaves smell like peanut butter. Still other plants are just odd looking, like that corokia, cobra-hooded arisaemas and the quintessential Dr. Seuss plant, Schefflera taiwaniana — just a tall, bare trunk with a little burst of leaves on the top. 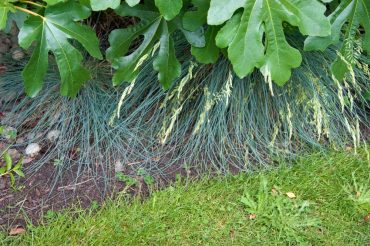 Whimsical pieces of gnarled wood that look like critters lurk among the foliage. One looks strikingly like the rear view of a person bending over. Another looks like a seated dog or pig poking its “head” out between the leaves of nettle-leaved bellflower. 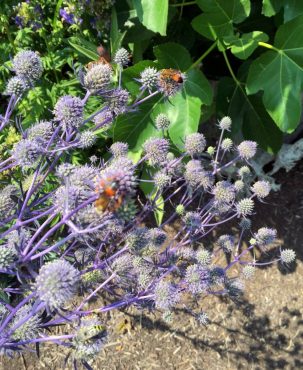 The garden is so full that “it’s gotten so I’m afraid to dig a shovel in,” Gillespie says. He also points out that, over time, as trees and shrubs have grown, “the garden is creating its own environment.” What was once sun is now shade in places and he’s having to edit.

“The cardoons were three times the size about four years ago. Each year, they are growing back smaller. I’m just going to have to transplant them,” he says.

Some Plants in
the Dr. Seuss Garden

He now needs to prune shrubs and trees to let the light in. “This year, I cut way back on the evergreen clematis,” he says. And some plants have been shifted to the sunnier outer edges of the garden. 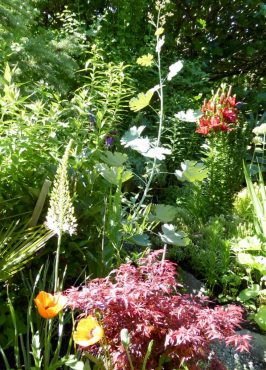 With the Dr. Seuss garden now in its maturity — if that’s the right word for such a playful theme — what does Gillespie plan next? He and Merkel are discussing a bog garden on the wetter, east side of the house, “with skunk cabbage and gunnera and other interesting bog-type plants.” It’s so boggy over there, “when you walk, you go ankle deep,” he says.

One of the challenges of his property is that it has become soggier over the years, as development has cut down trees uphill and filled in wetlands. Gillespie has built a lot of raised beds to keep vegetables and Mediterranean plants from drowning.

A few years ago, he installed a rain garden to channel some of the water away from the west side of the yard. A curving, rocky streambed, it’s populated by sedges, shrub willows and twig dogwoods. But on the east side of the house, the lawnmower sometimes gets stuck in the muck. On occasion, “I’ve had to use the tractor to pull the mower out,” Gillespie says. The bog garden won’t need mowing!