Carpeting the Garden in Living Green

A favorite look in many gardens is flagstone surrounded by a carpet of ground covers. Providing interesting textures and colors, the shortest of the short such as creeping thyme, Corsican mint, Irish and Scotch moss, and others cover the soil as they crawl over and furnish a cohesive element in the garden.

These plants provide textural interest as edging along walkways or in between stepping stones and pavers. Many of these plants creep or romp around the garden and surround larger vegetation. For plants that grow an inch or two above the soil, it’s surprising how much visual impact they can have.

Some great choices for pathways are the popular ground-covering thymes (Thymus). When stepped on, their spicy thyme fragrance releases into the air. Walk barefoot down a path covered in low-growing thyme and find it’s good for the soul and the soles.

Several cultivars and species do a fantastic job covering the ground. Thyme is drought tolerant, which is important for xeric gardens in the rain shadow areas on the peninsula. When planted under full sun, in well-drained soil, they are carefree plants once established.

For a tiny thyme, try elfin thyme (Thymus serpyllum “Elfin”), sometimes sold locally as Thymus minus and Thymus “Minimus.” The minuscule, evergreen leaves tightly packed together form a dense mat, which outlines the space between flagstones in a deep-green hue.

This small herb creeps over the edges of the stones wherever there are fewer footfalls. Superb growing on top of a rock wall, the tiny-leaf plant trails down and softens the hard edges between the stones. Every summer for a few weeks, the plant covers itself with little, purple flowers.

Baby tears (Soleirolia soleirolii), another Mediterranean plant, grows well in our climate, and spreads indefinitely. In some local gardens, it can circle around small Chiastophyllums and will cozy up to ferns, shrubs and trees. This plant often spills down rock walls onto a gravel pathway below.

It isn’t foot friendly on a main path, however. The less traffic on the ground cover, the lusher it looks. Baby tears dies back to the ground during a hard freeze; however, it faithfully returns in spring. Drought tolerant during West Sound’s rainless summers, it’s a choice plant for xeriscapes.

Another prime plant for between pavers is the charming blue star creeper — Isotoma fluviatilis, sometimes sold as Pratia pedunculata or Laurentia fluviatilis. This semi-evergreen, tiny-leaf plant cloaks itself with small, sky-blue, star-shaped flowers from late spring into summer, and continues with a sprinkling of blossoms for the rest of the season into fall. The “Deep Blue” cultivar is a favorite for darker blue flowers that don’t fade.

Blue star creeper requires well-drained soil and full sun for best results. The downside to growing this ground cover is that it can crowd out some small plants. So site it carefully where it can romp around, adding spectacular effects in the garden. You can find other cultivars that flower in hues of light blue, dark blue and white.

Louise Beebe Wilder once wrote about tiny Corsican mint (Mentha requienii), calling it a “powerfully fragrant microscopic mint, useful for carpeting dampish places.” Unlike many other plants from dry summer areas, this plant needs regular watering and will die back if not irrigated enough. Although evergreen during mild winters, for the most part Corsican mint is deciduous. The plant will take light foot traffic, making it suitable for growing between pavers and in the garden.

Irish moss (Sagina subulata) is not a moss at all, but a lovely, vibrant green perennial that grows to perfection between pavers and stones. Spreading indefinitely, it grows so dense, it forms small hummocks. You can also try planting Irish moss in the garden for additional interest, or cut an x in the hummock and push it back down to the ground. Scotch moss (Sagina subulata “Aurea”) is a cultivar with striking chartreuse foliage.

Generally, when planting ground covers, the plants will spread about 1 inch per month. Planted 6 inches apart, most plants will carpet the area in six months. At 12 inches apart, the carpet will usually take one year to fill in.

To calculate the amount of plants for an area in the garden, multiply the square footage (length times width) by the multiplier in the chart below. For example, if the square footage is 250 and plants are spaced 15 inches apart, multiply 0.64 by 250, which equals 160 plants. 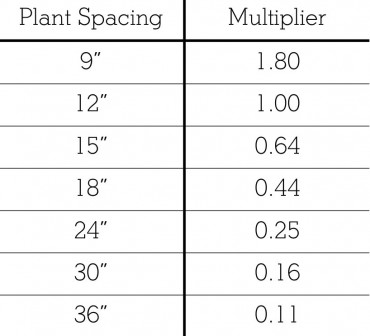 There is nothing like a little green mondo grass (Ophiopogon japonicus var. compacta) to pave the way between stones. It looks like grass from the lawn with a thicker blade but it is actually a member of the lily family.

Cultivars such as Ophiopogon “Nippon” grow 2 inches tall and O. “Super Dwarf” reaches 1 inch tall, filling the spaces between pavers with its no-mow, grass-like foliage. Its clumping habit makes it easy to keep up after; however, purchase and plant more of these initially to cover the ground, as they slowly spread only a few inches wide each year.

Tuck Sedum lydium into crannies in rock walls and along the edges and between pavers where foot traffic is light. This easy-to-grow, drought-tolerant sedum turns red during the summer drought as well as during the winter. The stems will root as they spread along the ground. The flowers are white and grow in small clusters above the foliage.

Flagstone paths properly prepared with a layer of gravel and sand for good drainage are perfect locations for all these diminutive plants mentioned. Choose the best plant for the conditions where it will grow.

A 4-inch pot can often be divided further, providing the ground cover is rooted from edge to edge of the container. Cut into four pieces, making sure each division has roots. Plant between intersections of the flagstones for plants that grow wide distances. For clumping plants, space appropriately so they will overlap a little with each other.

Water them in well and make sure the plants don’t dry out their first year in the ground. Then water as necessary for the cultivar chosen.