All About the Mason Bee 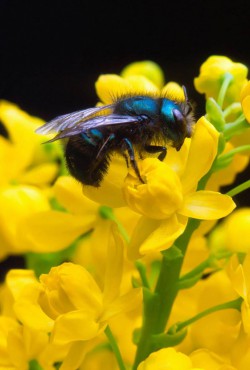 Mason bees are wonderful pollinators that are native to most of North America. They have been doing a magnificent job of pollinating long before the colonists brought in the honeybees from overseas.

The mason bee is not a hive-dwelling bee, therefore there is no queen. Simply, groups of males and females emerge in late winter and early spring from their cocoons and begin the process of pollinating all your March-May blooming plants, shrubs and flowers.

Our 2015 mason bees were greeted with an usually warm late winter and we saw quite a bit of early activity, with males emerging as early as Feb. 27 and females right on time two weeks later.

The male is easily identified by a small white patch of fuzz on top of its head, while the female is larger and hairier. They are both all black but do exude a bluish tint when the sun shines through their body, thus the other name, blue bee.

They look very similar to a fly, but they have four wings extending back along their body, while the flies have two wings extending out. As they are native to our area, you may see them warming themselves on the east or south side of a shed in your yard or the wall of your home, in mid to late March.

If you are having trouble with getting good fruit production or flowers in your yard, a lack of mason bees may be to blame. The orchard mason bee is the best early pollinator apple, pear, plum and many other plants that bloom in the late winter and early spring. They effectively pollinate 95 percent of the flowers they visit, while visiting upwards to 1,600 flowers a day.

A single honeybee visits upwards of 600-700 flowers a day but is effective only 5 percent of the time in fully pollinating a single flower. Honeybees’ success is shown in sheer numbers, with thousands of them converging on an orchard from their hives.

Why is the orchard mason bee female so effective in pollinating? It is because she has a hairy body and when visiting flowers, she packs the pollen into her hair. When she hits the next flower, pollen is transferred to the male/female counterparts of the plants or flowers.

In late winter and early spring, when temperatures stay at or above 55 degrees, you will first see the male bees emerge from their cocoons at the front of your Knox Cellars tube/straw system. They take advantage of early warming from the sun, while the females remain in the back of the tubes and wait for about two weeks before emerging, in most cases, late morning.

The males have been feeding and gaining their strength to carry out the mating process just as the poor female arrives at the end of the straw. She has a sperm sack in her body, where she saves the sperm, necessary at the moment in time when she begins to lay her eggs. The males wait for more females to emerge; after all their effort, they do live on but are not as effective pollinator as the females.

The female then heads out looking for food to get her strength back and find suitable housing for her eggs. When she finds an appropriate hole similar to the Knox Cellars tube system, or 5/16-inch hole size, she will lay a scent or pheromone identity on the hole, differentiating it from her fellow females. Having found her home, she heads out to gather mud, pollen and nectar to provision her first cell.

It takes five to 10 trips to gather mud and lay a wall in the backside of the tube. That is followed by numerous trips gathering pollen and nectar, mixing it against her first mud wall.

The nectar pollen solution is about the size of a pencil eraser. When complete, the female backs in and lays her first egg, pushing it into the nectar solution. If she is deep into a hole, 4-6 inches into the backside of the straws, she knows she can create a female egg, as it will be protected from aggressive predators.

In her season of gathering and pollinating, she can lay 32-36 eggs, unless she is grabbed in flight by a passing swallow. Bees also can drown in a birdbath that may be too close to their flight path, so keep them empty or moved to a better location.

The season for the female lasts about two months, depending on weather. In a normal spring, she will complete all her work by mid-May and die, but the new generation has been born to hatch next year.

The little new egg evolves or hatches after three to four days, revealing the larva. The larva over a period of 28 or so days consumes all the food, followed by several days of rest, and then begins the process of spinning its home or cocoon over a day or two. Then another period of rest, until it turns into a pupa and the final stages of developing its ultimate mason bee look by the mid part of September. Now in its warm, waterproof shelter it sits until late winter or early spring next year; the cycle has gone full circle with the complete metamorphosis.

Why use the Knox Cellars straw system? It affords the opportunity to clean out old debris, unhatched cocoons or underdeveloped pupas. It also allows you to find and eliminate the parasitic krombeini mite. It is found only in otherwise empty cells in a yellow seething mass of loose, granulated food and mites.

The chalcid wasp, or driller wasp, is another danger to the mason bees. It can drill through wood and thinner cardboard tubes, and lay its eggs into the larva/pupa. Thicker Knox Cellars tubes and straws prevent this from happening.

Be careful with any bees that may have been handled too much and bought in nice little boxes, appearing very shiny and clean. Giving them a bleach solution bath is the final stage in this commercial process. “Mother Nature” is not out there in the woods, with a bleach bottle, spraying the bark of Douglas fir trees. The cocoons, as stated by Brian Griffin in his book, “The Orchard Mason Bee,” have experienced some damage, such as dissolving the fabric of the cocoon.