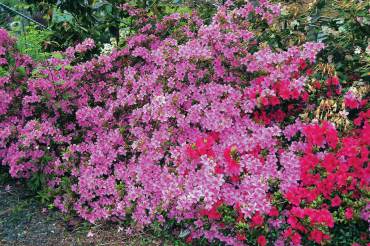 There’s a reason why Rhododendron macrophyllum is the Washington state flower. These beauties grow really well here. In May these plants are festooned with pink blossoms brightening the forested edges of highways and roadsides. Their many attributes make them great plants to consider planting in West Sound gardens.

Rhododendrons are in the heath family (Ericaceae). This family includes heathers, blueberries and mountain laurels (Kalmia); all grow very well in West Sound acid soils. There are more than 1,000 species in the Rhododendron genus. If you decide to look for books on rhododendrons, you’ll often find them described in books devoted entirely to azaleas. According to the American Rhododendron Society, “All azaleas are rhododendrons, with deciduous azaleas belonging to one subgenus (Pentanthera) and evergreen azaleas to another subgenus (Tsutsusi).” 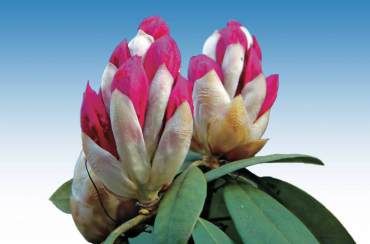 Many cultivated rhododendrons came from the foothills of the Himalayan Mountains, western China, northern India, Burma, Assam and from native species in Japan, Europe and eastern and western North America. Some of the rhododendrons are deciduous even though you may expect deciduous azaleas to lose leaves in the fall.

Rhododendrons in the Landscape

When choosing a rhododendron for your landscape, always consider the size it will reach at maturity. Most rhododendrons want to become massive shrubs as tall as some trees. There are a few very small (even tiny) rhododendrons, suitable for the front of a border or grown in containers but as a rule a rhododendron needs a whole lot of space. Even if you tuck it into a somewhat narrow space, the rhododendron won’t care, it will eventually tower above and sprawl out. 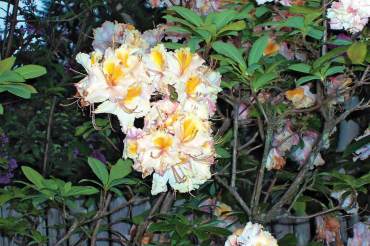 There are many good uses for rhododendrons. A hedge made up of several rhodie varieties remains evergreen all year, doesn’t need pruning and can have wonderful blooms festooning the hedge for many weeks (sometimes months) every spring. Use rhodies as specimen plants or backdrops for other plants. They combine easily with numerous other plantings.

Bloom times commonly range from February through June but a few do bloom in July and some others in September and October. Leaf colors vary from yellow-green to deepest bronze. Several variegated varieties are available. The undersides of some rhodies are coated with heavy, velvety fuzz in colors of yellow, cream, silver and rust. This coating is called indumentum. Scientists and others believe these are the most pest-resistant varieties. 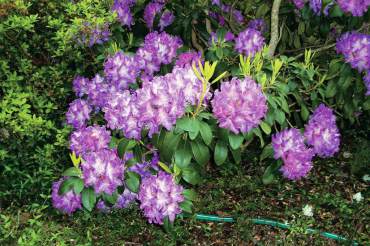 There are few insect or animal pests of rhododendrons, making them an easy-care plant. Root weevils are about the only insect that can damage a rhododendron. You’ll know if you have weevils because the edges of the rhododendron will look notched. The plant will tolerate much of this munching so nothing needs to be done. However, the larvae of this weevil is the critter that can do the damage to rhodies in the root zone. It is more of a problem in nurseries.

Aphids can sometimes be found on leaves. They do very little damage. In some areas of West Sound mountain beavers will nip off a rhodie stem from ground level. Usually this won’t be enough to damage the plant. Remember too, being an evergreen, rhododendrons can lose at last a third of their leaves each year. 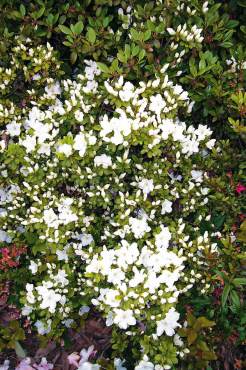 Once established, rhodies will require a good watering about once a month in July through September, sometimes into October. They are usually tolerant of weather extremes because they have the ability to fold their leaves when conditions become too cold. The leaves gather down around the stems and roll up a bit. This conserves moisture. This same leaf response can happen with lack of water or too much water, but the plant does not always bounce back from poor watering.

A Few Favorites to Try

Christmas Cheer — Was named because the original propagator would force blooms in the nursery to sell the plants during the Christmas holidays. Christmas Cheer actually blooms in winter any time from November through February. The blooms, since the weather is cooler, can often last for two to three months. Blooms are bright-pink before opening; shell pink when open, eventually fading to white. Coincidentally flowers rarely open up in December.

PJM — Is the next earliest flowering rhodie blooming right before or at the same time as Forsythia, Star magnolia and Pieris, from February through March. Blossoms lasting four to six weeks are in a hot-pinkish/magenta hue. Blossoms open first, followed by lime-green new leaves. The foliage then turns to dark green from April through the end of October, then deepest purple bronze in fall and winter. PJM is a good upright grower and quite slow growing; very good for small spaces. 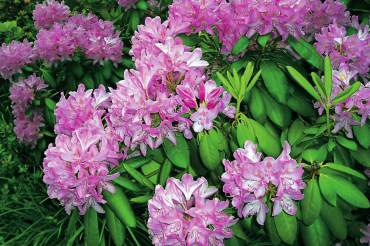 Gold Flimmer — Its leaves are variegated. Blossoms are in shades of lavender and lilac, quite small and usually hidden among the leaves. This plant is best for its leaves, which are dark-green with yellow-center streaks along the midrib; a striking plant. Looks good tucked in shadier areas of the garden.

Taurus — This red rhodie can be seen in many local gardens. It grows into a huge plant so give it plenty of room. It’s prized for its blooms in magnificent shades of red.

Sino Grande — Most rhodie collectors lust for this plant but not all gardens are suitable. It has huge, textured, deep green leaves ranging from 12 to 24 inches in length. Some literature describes the leaves as “elephant ears.” Blooms are creamy white with a splash of red. The indumentum is silvery white. Emerging leaves and buds are completely covered in the indumentum at first. To have the largest leaves, it needs a secluded, sheltered woodland site. Be careful, this one reaches giant heights. 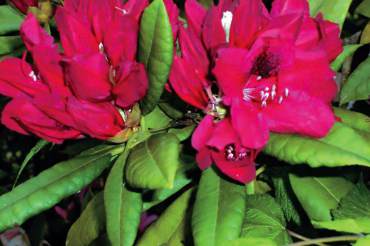 Blue Diamond — If you’re looking for a rhodie tolerant of sun, choose Blue Diamond. The flowers are violet-blue. Foliage is a lovely dark green (not too dark though) and is very slow growing. Stems are a wonderful mahogany color.

Purple Splendour — For the deepest, darkest purple blooms, choose this rhodie. The throat (inside center of the bloom) has a black streak. Leaves are the deepest dark green with a polished shine. This plant can reach heights of 12 feet or more and loves to grow in shady recesses of the garden.

Nancy Evans — If yellow and peach are your favorite colors, look for Nancy Evans. This is a charming plant, medium in growth. Blooms brighten a mid spring to summer garden. 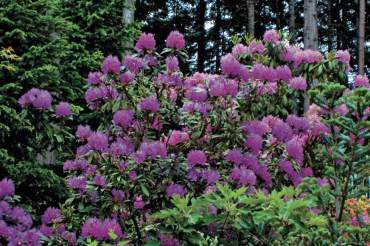 Where to Find Rhodies

Nearly all local nurseries carry rhododendrons; call first for hours and for their rhodie season. The Bloedel Reserve on Bainbridge Island is a good place locally to observe the plant and the various ways it can be incorporated into the landscapes.

The foremost pruning tip is, “Don’t.” Rhodies are very forgiving of improper or drastic pruning but these plants aren’t meant to be pruned. Choose the right plant for the right location in your garden. Avoid planting them in front of windows, too close to paths or in view corridors. Know that these plants grow tall and wide. You should, however, prune out dead or crossing stems and branches. Cut close to the stem/branch collar but not into the collar. 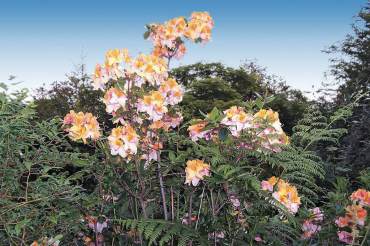 If you planted or inherited a rhododendron and it grew too large, consider moving it to another area of your garden, rather than pruning it drastically. The best time to move it is October through February when temperatures are cooler and the plant is conserving energy.

Depending upon the size of the plant, you’ll need several strong gardeners or family friends, inexpensive but strong plastic tarp and several shovels (garden spades). In the new location, dig the hole to prepare for the move and water the soil well. 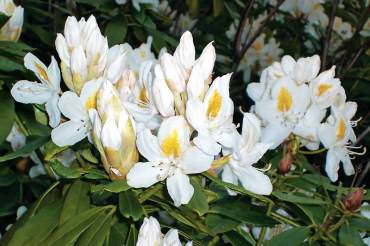 A well-watered rhodie will suffer less stress in a move, but it also makes the root mass quite heavy. Waiting a few days after a good rain works well. Just don’t choose a time when the rhododendron’s surrounding soil is dried out. A rhodie 3 feet wide by 4 feet tall can be moved by two people but three or four is better. Have a rhodie moving party.

Dig around the plant in a circle approximately as wide as the plant’s spread. Most of the roots on larger rhodies will be no deeper than 10 inches but quite dense. Sometimes you may find a separate root that is longer and somewhat isolated; try to dig it up and move it too. The root mass can be quite heavy. To loosen the roots from the earth, slide the shovel under the plant and push down on the handle to push the roots up from the ground. In a two-person operation while one person pushes down on the shovel’s handle (loosening and lifting the root mass), the other person will slide a shovel under the root ball to loosen it more. Continue this process working around the plant. The roots will gradually be lifted up out of the ground and separated from the original planting hole. 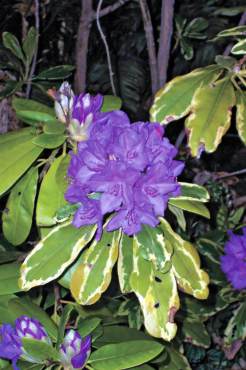 Next find the strongest trunk areas (usually there is a main trunk with several sturdy branches). Begin lifting and moving the plant. Go carefully to avoid accidentally breaking off the trunk or the branches. These steps may need to be repeated to make sure the plant is released from its hold on the ground. Depending on the size of the plant, either lift or slide the rhodie onto the tarp.

Take the ends of the tarp and slide or carry the rhodie to its new spot. Smaller and lighter weight plants can be placed in a wheelbarrow or wagon for transport.

Summer is not the ideal time to plant or move a rhododendron unless you’re able to monitor and water it when necessary during the whole season. But late spring and early summer is a great time to visit local garden centers, parks, nature preserves and other landscaped sites to observe rhododendrons in their natural environment. It’s the perfect time to decide which rhododendron is right for your own garden. It’s also a time of year when azaleas, both evergreen and deciduous, are in full flower. There just may be an azalea or rhododendron in your future.

This article was first published in the print edition of the WestSound Magazine in the Winter of 2011. Any discrepancies, omissions, or inclusions that seem incorrect are purely due to the age of this article. WestSound Magazine deemed this article useful and beneficial as a contribution to today's readership, and therefore is included in this site's online article archives. If you feel the content of this article is detrimental due to its age, please feel free to contact us to request removal or modification.
Tags: flowers, garden, outdoors, plants