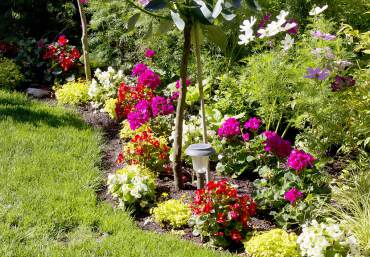 The hillside gardens of Barbara and Dave Shoaf offer a glimpse of paradise to every visitor. When the North Kitsap couple retired from spending their lives and careers in Phoenix, Ariz., they knew exactly where they wanted to move. In fact, they had been researching the Pacific Northwest, particularly the Poulsbo area, for several years, looking for the perfect spot to spend the rest of their lives.

“We literally had ring binders full of information on the area and photos of neighborhoods we’d found and were interested in,” Barbara says, adding, “Our goal was to never be too hot again.”

They also wanted to be fairly near an airport. Their son, his wife and their daughter, Ridley, still live in Arizona, but come to visit regularly. The Shoafs’ daughter, her husband and the couple’s children — twins Sydney and Madison and their sister, Chloe — live in the Seattle area now. All four granddaughters love visiting their grandparents. Many of the paths, much of the plantings and several amenities were created especially for them.

Dave says his way of making paths is to observe where the girls walk the most and then build a path for them. He’s also built several low bridges, wooden benches; a round fire pit surrounded by rows of flat, square, terra cotta stones creating a welcoming circle; colorfully painted chairs for resting and a huge hammock strung between two stately evergreen trees.

“It’s exceedingly important to us that we have a home and garden where our granddaughters want to spend time and visit with us,” Barbara says. The paths also anchor all the beautiful and appealing gardens.

Oct. 1, 2009 marked the day this 0.82-acre bit of heaven became theirs. All during November through February, the couple tackled the weeds and blackberries, and even removed lots of stumps. They planted huge areas of lawn from seed that spring.

Dave says, “I became very familiar with the stump grinder.”

They also worked on creating privacy and built a mixture of decorative fencing, trellising and privacy screens. Barbara is a fan of the HGTV gardening shows. One celebrity said, “You need enough privacy in your garden so you can walk around naked and no neighbors can see you.” Barbara kept that in mind as they built their garden areas, but of course she doesn’t walk around naked. But they do love their privacy provided from the beauty of their gardens and the plants and fences. 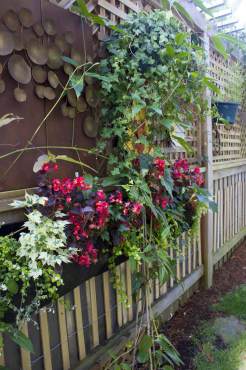 Barbara says she doesn’t like to look at bare fences so she has added garden art, climbing plants, shrubs and trees to conceal or enhance much of it. One section of fence has fabric planting pockets mounted between the posts. These planting pockets were ordered through Valley Nursery and are filled to the brim with colorful annuals adding bright spots of color to an area that would otherwise be quite plain. Another section of fencing off their back deck includes a long arbor with sections built especially for hanging baskets brimming with flowers to last through several seasons. 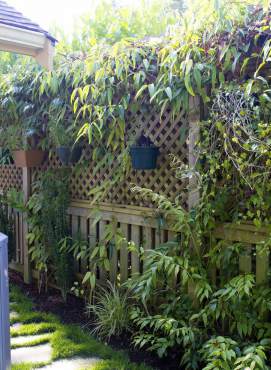 Every section of their gardens has been planned to take advantage of the slope as well as shade and sun. A picnic bench is tucked into a shady nook up against the wildlife-corridor greenbelt running along the back of their property. 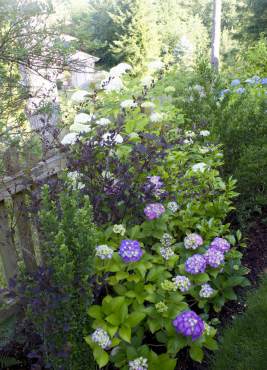 Decking terraced on several levels at the top corner of a hillside provides a spot to sit and view the ever-changing panorama of plants as the seasons flow by. A canopy offers shaded viewing during the hotter summer months. In carving out areas on their property’s steep, hilly contours, they trucked in yards and yards of soil, compost and mulches during their first year. The Shoafs estimate the first year they brought in between 30 and 35 truckloads of amendments. Barbara has a smaller SUV and Dave says, “She uses it like a truck to bring home lots of plants.”

The Shoafs admit that they do not use a landscape plan. They just plant what they like and what they enjoy, creating the flowing beds as they go.

“We just love the green,” Barbara says, adding, “It’s alive here!” She says in Arizona they could only grow about 200 plants but in West Sound she can grow thousands and thousands of different ones. They started with 4,000 square feet of lawn the first year, all planted from seed, and then every year since they’ve been removing more and more lawn. It’s now a 1,500-square-foot verdant circular area echoing the circular fire pit nearby.

Dave loves growing things to eat, so they’ve sprinkled fruit trees through several sunny areas of their property. The fruit includes but is not limited to apples, pears, plums and several types of berries. 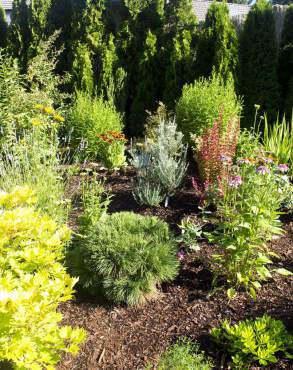 “We started out with a lot of plants that we’ve pulled out,” Dave says. “We’d never gardened where everything grows and thrives with very little care,” Barbara adds. They do fertilize (as needed) and everything is either watered by hand or with a sprinkler moved around the gardens. Most of their plants don’t require much care though, once established. 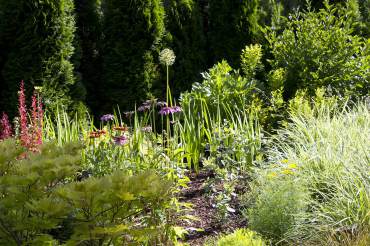 They’ve also eliminated invasive, weedy and unhealthy plants from their gardens. “We hardly ever had problems with weeds in Phoenix,” Dave says. Meaning they have to weed a lot here. But Dave feels it’s totally worth it to weed away and he loves being out in the gardens.

At first Dave was fascinated with euphorbias but quickly realized they cover ground, spread way too fast and are not that appealing any more. His favorite plants (at present) are Japanese maples because of all their colors and textures. 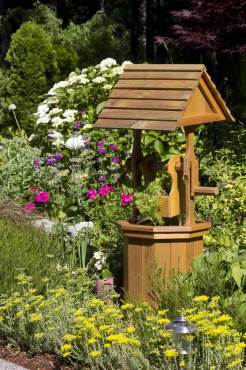 “I didn’t know that so many plants are deciduous and lose their leaves. We didn’t have those in Phoenix,” Barbara says.

She loves evergreen plants for the form and function they provide. She especially likes plants with yellow and burgundy coloring, whether it’s their foliage or their flowers. Barbara likes the way those colors show off with other greens in the background. But she also has a whole garden filled with purple plants, both in flowers and in foliage, and several gardens are filled up with splashes of colors in red, orange, yellow and a kaleidoscope of hues. Every garden area is packed with bulbs too. 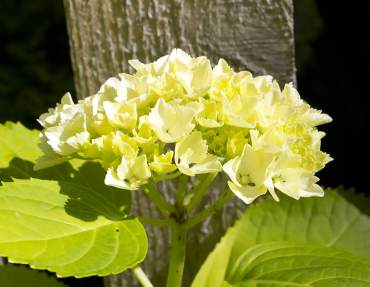 There were two areas on their property where water would collect. One was very swampy for several months each year. They soon put in a dry-creek bed and French drains. Barbara says she picked away at that area for what she estimates was possibly six months. Picked means with a tool that Dave had from his Army days. It was made to dig out trenches. While she was picking, he was creating curtain drains and routing the water into a portion of the dry-stream bed.

There was another area they called “the scar” where utilities were brought in to the property. It was also the path for all the equipment to build the home. After working on this section for several years and having several existing wild conifers die, they put in better drainage there and enlisted the aid of John van den Meerendonk of Botanica Inc. to come up with a planting plan. He also installed many of the native plants in this area. 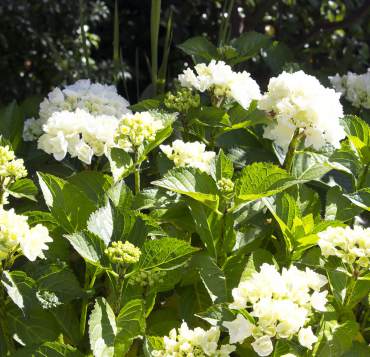 Van den Meerendonk helped them turn this section of hillside into a nearly total native-plant area. Barbara says she just cannot resist tucking in a few native plant cousins in this area though. The redirected drainage has given new life to a stand of cedars in this section. Some of their favorite plants in this area are Vancouveria, evergreen huckleberry, mahonia, a wide variety of ferns and oxalis. Every year, Dave harvests the huckleberries and makes pies.

Plants don’t always get to stay where they are first planted. Barbara says she has a rule: A plant can be moved three times and then it’s off to the compost pile. She has one garden area that’s just for “hopeless” plants where she places the plants that she’s moved once or twice and they still aren’t doing what she expected. She calls it “the last-chance zone.” Somehow the plants in this area thrive though. Maybe they don’t want to be made into compost. 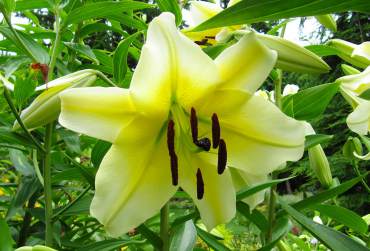 Dave has a John Deer riding lawnmower/tractor. It has a small trailer to hook on the back. He also uses a trashcan with wheels to collect and move all the weeds he’s pulled up. In addition, he has a big utility trailer for hauling bark, mulch and any other large items they may need delivered. It also works for taking yard debris to a nearby composting facility.

Barbara has a wheeled garden cart and a cute toolbox full of all kinds of pink-handled implements. It was a present from their son, who also just happens to buy her plants and trees each June on her birthday, specially ordered and delivered by Valley Nursery. The Shoafs also have a pair of matching wheelbarrows. That way they can both wheel mulch, soil, rock and other amendments when needed. Or just wheel plants around.

These are just a few of their favorite things for gardening. Dave jokes, “I bought all the fruit trees and she bought all the rest. She started hauling plants in her car but now we also use the trailer.”

In reality, both of the Shoafs have vehicles that are built especially for hauling home treasures, whether it is garden art or just a few more plants to tuck here and there. But that’s not all. Dave just built a very sturdy bridge over the dry-stream bed so he can tractor items from one section of the gardens to another. The width had to be just perfect and it needed to hold the weight of the tractor. 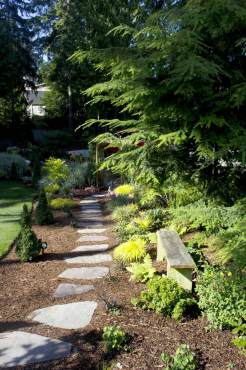 Barbara has kept a pictorial record of their garden from beginning to the present time. It’s amazing to look at the photos of what was there when they began and what is there now. She has also kept records on plants purchased and their botanical names. She admits she’s not as disciplined about keeping track as she was in the beginning. But she can pretty much tell you the names of nearly all the plants, where they came from, and when she and Dave planted them.

Already the Shoafs are planning a new project next year. A hilly area at the top of their driveway was once covered in blackberries and nonnative, weedy grasses. “The hill just looked trashy,” Barbara says.

They tackled this area quite soon after purchasing their home but since it was one of the first in their gardening efforts, they now want to redo it. They are good at digging and dividing and moving plants around.

“I do a lot of exchanging,” Barbara says. “I just look at it as an opportunity to get outside and enjoy the yard,” Dave says.

One can assume this newly revised and replanted area will soon be just as appealing and gorgeous as the rest of their paradise on Earth.