There are approximately 4,000 species of aphids in the world but only about 250 species are serious pests; only 1,350 species live in North America. Are you feeling better yet?

Aphids range in length from 1/16 inch to 1/4 inch and come in a wide variety of colors: green, red, brown, black, yellow and pink, to name a few. They can reproduce in a variety of ways, depending on the availability of food and the rate of their destruction by their enemies — mostly humans. Aphid bodies are soft and pear-shaped, each with five to six segments; they have two antennae. Aphids have two compound eyes and can grow wings when needed.

These critters secrete a sticky substance called honeydew. Honeydew is aphid poop. A sooty black fungus can colonize on the honeydew secretions. Two appendages at the back of their bodies, called cornicles, can secrete a waxy fluid that serves as a defense from predators. 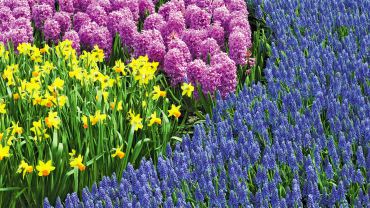 Reproduction (and survival of the species) occurs in a myriad of ways. In some aphids, each insect in a generation contains individuals for the next generation and the next generation after that and so forth. In other words every aphid is already pregnant with its successors and the successors are pregnant too. That’s why they often seem to multiply very rapidly. Some populations start out with males and females that mate, but later change to already pregnant females.

The good news is that aphids are relatively easy to control. They have numerous natural enemies, such as ladybird beetles (ladybugs), hoverfly larvae, parasitic wasps, aphid midge larvae, crab spiders, lacewings and entomopathogenic fungi. All except the fungi live happily in abundance in gardens and help with aphid control in a big way.

Aphids usually do not fly and do not crawl long distances. The best defense for gardeners is a good spray of water from the garden hose. The water spray knocks them off the plants and they do not crawl back. This method should be repeated every few days. Also avoid using an abundance of nitrogen fertilizer.

Most aphids like the newer growth of plants. Gently rubbing aphid-covered foliage between fingers satisfyingly squishes the beasties. Research scientists have learned that pesticides should be avoided whenever possible because aphids can quickly build up a tolerance to the chemicals. They say chemicals should be a last resort. They do, however, recommend using sticky traps.

Many people have heard about ants “milking” or “farming” aphids. Many do, indeed. Ants feed on the honeydew produced by aphid secretions. Some populations of ants harvest aphid eggs laid at the end of the growing season. They store the eggs in the ant tunnels over the wintertime and in the spring the eggs are returned to the host plants to hatch out; the ants can once again feed on the honeydew secretions.

Aphids migrate through “passive dispersal” by riding on wind, transferring from plant materials or using ants for “assistance;” humans also contribute to the migration by incorporating infected plant material into their gardens. Many aphids feed on only one plant source. A few examples of plant-specific aphids are rose aphids, cabbage aphids, squash aphids and fruit tree aphids. Each generation of aphids can live from 20 to 40 days. Some have been known to produce up to 41 generations of pregnant females in a growing season. The last generation in a season will often lay eggs that overwinter on or near the host plant. The eggs hatch out new populations during the next growing season.

It’s important to monitor plants on a regular basis. It’s also important to know if a problem exists. Often plants and aphids coexist quite well with only a wee bit of damage to the plant’s leaves.

As a whole, West Sound doesn’t have huge aphid problems. With a little diligence and a garden hose with a spray attachment, gardeners can control these pestiferous beasties. That’s very good news.

Storm water is water that falls on land, roadways and other hard surfaces, and then travels (often very rapidly) into the streams, lakes and saltwater bodies on the peninsula. In West Sound area, the water consumed is drawn from groundwater rather than from mountains and rivers, with the exception of some of the city of Bremerton’s water. It has become more and more important to keep as much water from rainfall and irrigation on personal properties as possible, so that it can return to and replenish the underground aquifers.

Two methods to slow down and filter storm water are rain gardens and cisterns. To learn more about incentive programs, contact the Kitsap Conservation District at 360.337-7171 or email kcd@conservewa.net. The KCD staff is often out in the field so be sure to call first before stopping by. Tours of the storm-water solutions displays at the KCD site can be arranged for individuals and groups. WSU Extension rain garden mentors also assist citizens in the city limits of Bainbridge Island, Poulsbo, Bremerton and Port Orchard. These educated and trained volunteers work closely with city and county staff and other storm-water partners such as the Kitsap PUD.

In Pierce County, contact the Pierce PUD for information on rain gardens and storm-water solutions. The Pierce Conservation District also has information and demonstration sites.

This might be the year to join a garden club or plant society. West Sound abounds with garden clubs and the societies include fruit, dahlias, fuchsias, chrysanthemums and roses. Meeting dates, times and locations vary widely. Each club and society often includes a speaker on a topic of interest to gardeners, along with a regular business meeting.

A listing of local garden clubs and societies was included in the 2013 summer issue of WestSound Magazine. If you missed the article, send an email request to gardenmentor@yahoo.com. The Master Gardener Foundation of Kitsap County offers a few lectures and classes on gardening topics from 1 p.m. to 3 p.m. on the third Wednesday of the month from January through June at the Poulsbo Fire Station. For more information visit www.kitsapgardens.org or call the Master Gardener hotline at 360.337-7158.