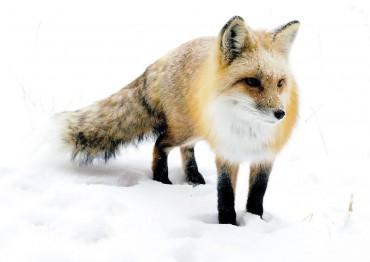 In England, foxes are an integral part of an English garden, except if the garden includes chickens — and then foxes are definitely not wanted. Here in West Sound, we could go for years without glimpsing a fox, or we may see them several times a year. If you live in a region where there are lots of coyotes, you may never see a fox because foxes avoid coyote territories.

There are two theories on how foxes came to our continent. Some researchers say foxes have always been here, as evidenced by fossil remains. Others say they only came here in the mid-17th to 18th centuries. They are believed to have been introduced to America from England and Germany for fox-hunting purposes.

Today in our region, foxes are part of the native wildlife population. Foxes are usually solitary beings except for winter, when they begin searching for mates. The female foxes are called vixens. The young foxes (born in mid to late spring) are called pups or kits. Foxes only cohabitate until mating is completed. Sometimes a male fox will stay around to feed the vixen while she is pregnant and then may continue hanging around to help feed the kits.

Foxes hunt alone and have a keen sense of smell and hearing. Their main diet consists of insects, mollusks (snails, slugs), earthworms, crayfish, blackberries, apples, plums, rodents (including mice and voles), rabbits, frogs, lizards and fish. They will also feed on birds when they can catch them and chickens when chicken habitat doesn’t restrict the fox’s access. In Japan, they’re called kitsune (god of farmers) because they voraciously eat rodents, protecting the farmers’ crops.

A fox’s stomach can hold only 10 percent of the animal’s weight (unlike dogs, who can consume 20 percent of their body weight). Foxes are nocturnal, being most active at twilight and night time. On average they can weigh from 7.9 to 17 pounds. Their eyes are gold to yellow with vertical slit pupils (similar to cats). It is believed their eye structure allows them to see well in the dark. Foxes can run up to 45 mph when necessary. Their long, bushy tails provide balance, enabling them to turn in midair and leap as high as 6 feet and as far as 12 feet away. They are very quick and agile, with lightweight bones and longer back legs than front, just right for sailing through the air to pounce on prey. Often they’ll leap on prey by launching from a sitting position.

Baby foxes are born blind with their eyes closed. Their eyes finally open at about 2 weeks. Dens are lined with grasses and the kits stay in the den until they’re about 5 weeks old. In 10 weeks, the kits are weaned and they’re completely on their own as adults at 10 months, when the mating and birthing cycles start all over again. Foxes in the wild live only three years on average. In captivity they can live up to 12 years.

Fox fur changes with the seasons, growing longer over fall and winter to keep the fox warm (literally making a winter coat for this mammal). It sheds its coat in the spring and summer. Last but not least, the final fact to share about foxes: They lack facial muscles and cannot bare their teeth like dogs and wolves, their cousins in the canine family. Foxes are elusive but very interesting creatures. You may be lucky enough to spot one.

Mulches are a very good way to protect and ultimately nourish our precious plants and also help the soil retain moisture during our often drought-like summers. If the winter is mild instead of wicked, try getting mulching done now and at least have some of the spring readiness work started early.

Bark is the perfect mulch for acid-loving plants. A one- to two-inch layer works perfectly to curtail or prevent weeds, and those that do sprout pull up easily. Bark turns into compost in about two to four years. Let it biodegrade where it is or till it into existing soil. When tilling composted bark into the soil, make sure not to disturb the roots of the plants. Or rake up the old composted bark, if any is left, and add it to the compost pile, making sure to mix it in with plenty of green vegetation and some manure. Usually old bark will have biodegraded into good soil and can stay right where it is.

Many gardeners just leave the bark where it is, rebarking every three or four years on top of the existing, settled-in bark. Always avoid piling any mulch or amendments too deep up around the root zones of plants. Also avoid having bark or mulch up against stems and trunks where it can create problems with the bark of woody plants. Remember that perennials are picky about being covered up; stay in the root zone but do not bury the crowns of perennials. Avoid using bark on perennial beds unless the plants are acid-loving. Perennials often don’t tolerate wood mulches or any deep amendments over their crowns. Instead, densely planting perennial beds will drastically curtail weed growth without mulching.

Gardening books and columns sometimes report that wood bark leaches the nitrogen out of the soil. There’s as much literature listing the pros as there are the cons of this theory. Bark mulches are mostly safe to use in the Northwest gardens but not in vegetable or most perennial beds. Bark will often turn into rich soil over time, even when used on pathways between vegetable rows.

If you don’t use cover crops for vegetable or perennial beds, check with your favorite landscape-supply resource in the area. There are many mulching and compost products on the market now. Several inches of these newer compost-rich mulches will keep weeds down and greatly enrich a garden’s tilth. These newer mulches and amendments come in an array of shades and textures. If the look of natural brown or black/brown soil without mulch appeals instead, make sure to densely plant those unmulched, unamended areas. The more desired plants in an area, the less room left for weeds to take over.

A method of weed control used in Europe is to lightly turn over all the bare soil in planting beds. Regularly turning over the top few inches of soil results in the death of all the weed seeds by exposure to the elements or by becoming feed for birds. Always avoid turning over the soil in overly wet soggy weather. The trick is to not compact the soil with the soles of your shoes or with gardening tools. Pick up a handful of soil and squeeze it. If it sticks together like a mud ball or holds together like cookie dough, don’t garden or disturb the soil. If the soil is still crumbly and there are definite separate particles, it’s OK to keep turning the soil over. Mother Nature and a gardener’s hands and eyes will indicate when to stop for the weather.

For very weed-rich areas in a garden, try setting that area aside for weed-annihilation therapy. This therapy works especially well for areas targeted for new plants or replanting. If there are plants to save from the area, it’s wise to dig them up and move them to a more weed-free area. Turn over the soil in the weed control area by using a spading fork, shovel or rototiller. Now cover the whole area with several layers of newspaper. Be generous with the layers. (Cardboard works too, but takes longer to biodegrade.) Water the area well so the layers of paper/cardboard become wet through. Spread a layer of bark, leaves or straw over the whole area and let it rest until spring.

In the spring, either till the entire area together or if it’s not completely broken down, remove the bark or straw to the compost area. Or simply dig through the layers and plant where desired. Weeds that might emerge should now be easy to pull up and destroy. This method also works to make garden paths by using the cardboard/newspaper method but skip the rototilling and/or digging and planting part.

Magazines to Explore, Read or Purchase

Well, of course first on deck is our own WestSound Home and Garden magazine. Visit this page to subscribe at $20 per year or $35 for two years. Also explore the following gems, some free and others for a subscription.

Taunton Press offers “Garden Design,” which is quite schmaltzy found at www.finegardening.com and subscriptions are $29.95 per year.

“Pacific Horticulture” magazine is targeted for Washington, Oregon, California and Hawaii. It is not overly glamorous in appearance but is cram-packed with very good horticulture information, with more well-written text than photos and illustrations. If you’re a hard core gardener and want to totally immerse yourself in the words of stellar experts in horticulture, then this is the magazine for you. Subscriptions are $28 per year and the website is www.pacifichorticulture.org.

All of these recommended magazines are available at local Kitsap Regional Library branches and the websites offer a sneak peek along with many of their past articles to peruse.