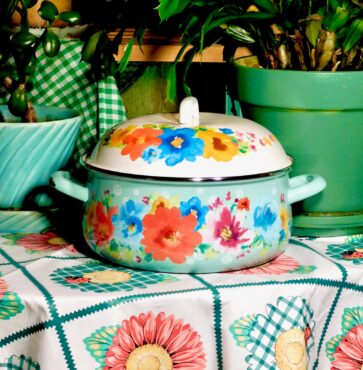 Never thought I’d use the words “over the top.”

It had been ages since I was at the Silverdale Goodwill, the one across from Costco. Months prior, I noticed a lack of vintage decorative enamelware pots and pans, so I was taken aback when I looked down and saw this oddball with a miss-matched, taped-on lid.

The 4-quart Dutch oven was priced at 14 bucks and had a chipped handle. The white inside appeared to have never been used, the lid was actually produced to go with the pot and the bottom did not indicate where it was made. It read “The Pioneer Woman.”

Initial research was a bombardment of imagery and information. The pattern was referred to as “vintage floral” so I presumed “old,” but I was wrong.

Another pattern was called “breezy blossom.” The bright, decorative floral patterns were boldly boisterous and were produced on about everything from drawer liners to knife handles. The red and aqua patterns overwhelmed my senses. The Pioneer Woman business was started by an Oklahoma woman named Ree Drummond, whom you might recognize from the Food Network. The multimillionaire is an award-winning blogger, chef and TV personality.

I discovered some of The Pioneer Woman products were made in the United States, but most of the pots and pans were made in China. “Thrifting” and “China” are words that usually don’t go together, but with China being today’s main product producer, imagine a thrift shop 50 years from now.

You can find this Dutch oven new in stores for around $30, so $15 for this Goodwill item with a chipped handle was not a big bargain. It’s pretty and practical, so I feel good about keeping it, but would not want many more kitchen items with this pattern that The Pioneer Woman has put on about everything, way over the top.