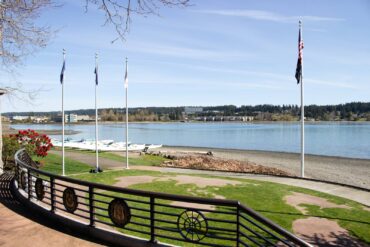 Silverdale is one of the fastest growing areas in Kitsap County, with a population of around 25,000 and growing each day. This community has been known for many years as the retail center of the county because of the Kitsap Mall, which opened in 1985 and shifted the retail core of Kitsap from downtown Bremerton to Silverdale.

The original anchor stores in the mall were Lamonts, Sears and the Bon Marche, which later became Macy’s. JC Penney joined in 1989. In the past year, Kitsap Mall has had some major changes due to the addition of new mall ownership and the closing of Sears, which had operated in the mall for 35 years. 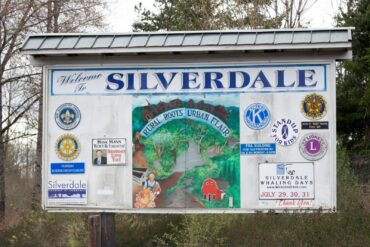 Located at the northern tip of Dyes Inlet, Silverdale began as a small logging and farming community around 1854, when Capt. Charles Wilkes sailed into the inlet and started the town. Around 1878, Silverdale was settled near what is now known as Old Town, which remained the commercial center of the community until the early 1900s.

The town was originally named Goldendale but it was discovered that there was another Goldendale in Washington, so the name was changed by replacing gold with silver. Even though the community of Silverdale is larger than most other cities in Kitsap County, it has yet to become its own city. Some local residents have attempted to incorporate Silverdale a number of times, but the citizens have voted down incorporation and the Kitsap County government continues to manage and govern it.

Many people see Silverdale as a good place to live. Location is also an advantage — it’s about 7 miles from downtown Bremerton where a lot of its residents work at the Puget Sound Naval Shipyard. Today, Silverdale is a very dense suburban community, with good schools, affordable housing stock and many things to do.

The town has wonderful views of Mount Rainier and the Olympic Mountains and is a short drive to the Olympic National Park. Other popular activities are walking the beautiful Clear Creek Trail, visiting some of the many antiques shops in Old Town, picnicking at the Port of Silverdale Park and paying a visit to Lisa Stirrett’s glass and art studio — and, of course, spending the day shopping at the Kitsap Mall and The Trails.

The new hospital has 248 beds and a new 500,000-square-foot facility that includes a new cancer center. Silverdale has become the center for medical services in Kitsap County, now that the hospital and The Doctors Clinic are located in various buildings throughout the area.

Another wonderful addition to the community in the last few years has been the new Haselwood YMCA, which was funded in part by the Haselwood family. It’s a fantastic facility for adults and children.

Silverdale continues to attract new residents from all parts of the state. The community’s future seems very bright, with great medical services, good housing, good schools and a high quality of life for residents.