A Jewel Tucked Away From View 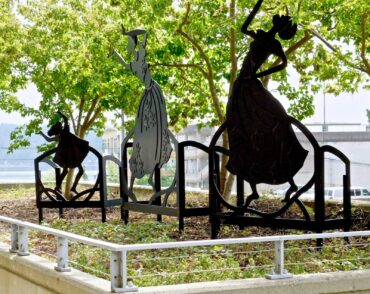 This is not an “Amy’s One Painting,” nor is this even a painting. It’s a public art feature by Augusta Asberry. Have you seen it?

Of course you haven’t. It’s public art that the public does not see, for it’s located in the heart of downtown Bremerton just outside the back door of the Norm Dicks Building where foliage and brush obscure its presence.

At the building’s completion, I heard a rumor that the three-piece art installation was supposed to be located directly outside the south double doors, where it could be seen from 5th Street. Problem was, that designated location was above a parking area that could not accommodate the weight of the Asberry sculptures.

The art was moved only a few feet, but visibility diminished. That upset me. We have public art all over downtown, but most of the sculptures are not by local artists. Here was work by a local artist, but seldom seen. 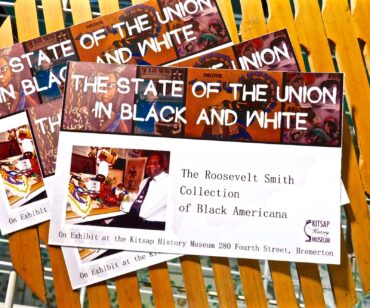 I contacted Roosevelt Smith, who shared my concern. We had worked together on several community projects, most recently on his black history exhibit at the Kitsap County History Museum. With my concern being local art inclusion and his being black artist inclusion, we became partners with intent — wanting Augusta Asberry’s “African Dancers” moved from the backdoor area to the front entrance.

Asberry was a fabulous artist who had gained national attention before her passing in 2007. She retired as a surgical nurse but stated, “Making art has always been one of the biggest joys of my life.”

Smith had influenced Asberry’s direction. At the time of meeting Augusta, Roosevelt was working with then Bremerton Mayor Morrie Dawkins to display works of African American artists in city hall during Black History Month.

From soft landscape and barn settings to aggressive paintings of African dancers, Asberry’s work was a study of patterned cloth and movement. I considered myself to be an academic compositionalist, but Augusta put a holt to those notions, as she explained that the line of painted dancers has no focal point. “It’s like jazz.” she said, “one movement holding many.” That influenced my art.

While in downtown Bremerton on Pacific Avenue, turn and go up 5th Street. There to your left, walk up a tower of steps, the stairs leading to the back of the Norm Dicks Building. You’ll find the black iron life-size dancers tucked among the trees — but don’t blink, you might miss it.