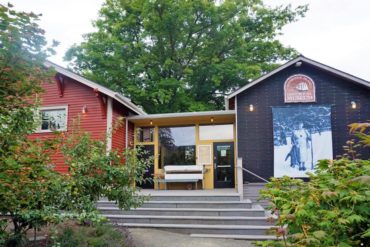 In the building’s 110-year existence, it has been poked and prodded, repainted, rewired, moved from one end of the island to the other, retrofitted with an annex and lifted to dig a basement to provide climate-controlled storage and more research space. Fittingly, the little red schoolhouse containing the artifacts of Bainbridge Island’s colorful history is, itself, a remnant of Bainbridge’s past. Home to the award-winning Bainbridge Island Historical Museum, the 1,000-square-foot building has led multiple lives, all of them on the island. 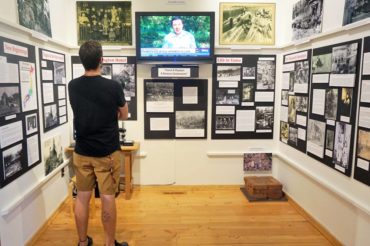 The museum’s saga started in 1908. It was originally constructed as Island Center Grade School when the residents of one of Bainbridge’s 11 historical townships raised the money to build a one-room school for their children.

Fifteen years later, the vacated building became a meeting hall for the Island Center community. In 1930, when the school district’s high school hired a music teacher, the schoolhouse was mounted on rollers and moved to the campus to serve for 40 years as the band and choir practice room. 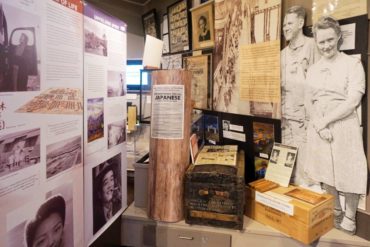 Dubbed “the Annex,” the building was eventually donated to the Bainbridge Island Historical Society for use as a museum. Once again, the one-room building found itself on the move — but not before former and current high school students paid homage in a farewell ceremony on its final day on the high school campus.

Relocated to Strawberry Hill Park, the schoolhouse was dedicated as the Bainbridge Island Historical Museum on Nov. 3, 1973. With a place to preserve and showcase their community’s colorful history, island residents generously donated family heirlooms and artifacts to the Bainbridge Historical Society. 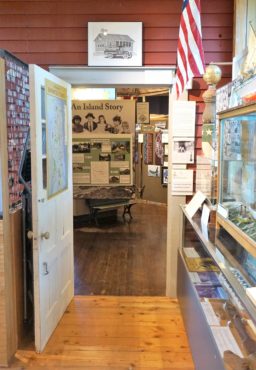 By 1997, the museum’s collections overwhelmed the small building. A second building was added to create storage space and workrooms. In 2004, the schoolhouse and companion building were moved to Bainbridge’s downtown hub to make it more accessible for visitors. 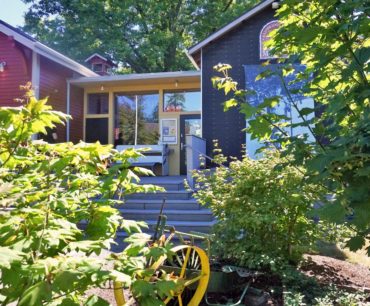 “There continues to be a steady stream of valued family and business artifacts that make their way to the museum, some that have to be rejected because of space limitations,” he says.

Deciding how and when to create exhibits around the collections is the work of Chandler, the museum’s staff and a dedicated group of board members.

The original one-room schoolhouse is now the museum’s main exhibit space, housing its semi-permanent collections — many of them honoring the diverse peoples who played a role in the island’s history. They include exhibits about the island’s first residents, the Native Americans who fished and harvested shellfish, leaving middens along the shores. 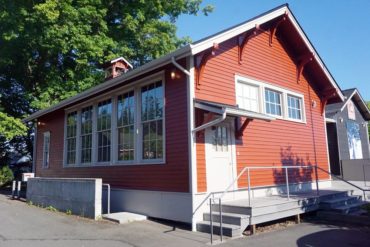 Significant square footage in the tiny museum is dedicated to the video, audio and pictorial memories of Bainbridge’s Japanese American community members who were forcibly removed from their homes to internment camps during World War II. The display features photographs of their lives in California’s Manzanar internment camp taken by Northwest photographer Ansel Adams and photos of the war’s all-Japanese 442nd Regimental Combat Team.

The island’s logging and sawmill era was dominated by Port Blakely township and its lumber mill, at one time the largest in the world. The museum’s largest photograph collection and a scale model of the mill site capture that historical period. During the mill’s heyday, Port Blakely Harbor had separate communities for the mill’s immigrant workers, including a Hawaiian and Spanish village and a recently excavated Japanese village. 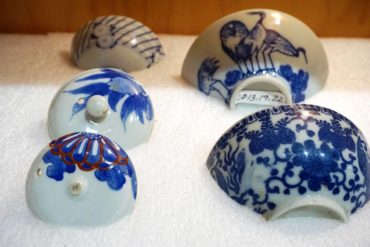 Artifacts from the Japanese village archaeological site are featured in a newly opened temporary exhibit, called Yama and Nagaya: A Pioneer Community. Using historic photos, video footage and ceramic artifacts recovered from the site, the interpretive display tells the story of a thriving Bainbridge village and the collaboration between Olympic College’s archaeological field school, the University of Washington Burke Museum and the Bainbridge Historical Museum to study and preserve the village site. 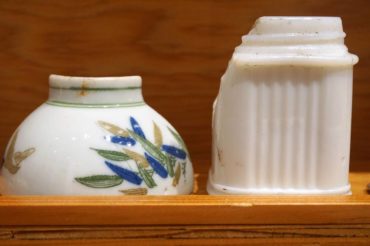 Outside the museum are large-scale displays that include the machine remnants of the island’s creosote treatment plant (now an EPA Superfund cleanup site) and a cedar rowboat used in a cross-Puget Sound competition in the 1950s.

The museum has an active outreach program serving school, community and youth groups and it prides itself on making its onsite McCracken Library and archives available to the public for research. The research collection includes over 9,000 photographic images of life on the island and 330 maps, some of them hand drawn, illustrating historical, navigational and topographic features. 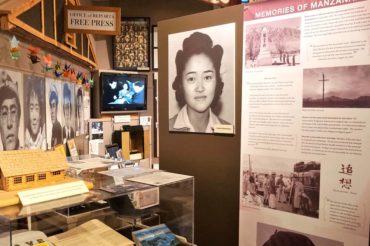 The Story Share Project is the museum’s effort to record the oral histories in audio and video of island residents, an effort that currently has more than 200 oral histories on file. Additionally, the research library contains biographical files of letters, photos and news clippings of over 550 islanders. Some of the photos and archives are available for viewing on the museum’s Virtual Exhibits webpage.

For visitors who want to view history outside the museum, there are multiple options. A self-driving tour researched and published by the museum takes you to 20 unique island locations including a haiku garden, a former nudist camp, the Fort Ward Historic District, historic farms and military installations, and the early-1900s settlements of Croatian fishermen. Maps and a booklet are available at the museum. 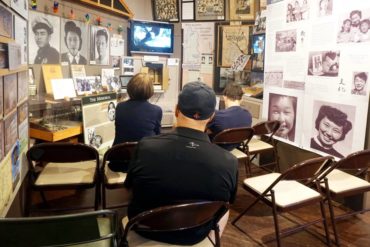 Out-of-museum programs include walking tours with museum staff and experts to local historic sites to learn about the island’s Native American petroglyph identified as Haleets and an annual stroll to see the island’s historic trees. The museum also sponsors a lecture series at the local library.

Annually, Bainbridge Island Historical Museum sponsors a fundraising cruise of the island, taking passengers on the Virginia V, Puget Sound’s last wooden, steam-powered ship. Accompanied by historians and the Suquamish Tribe archaeologist, the cruise on one of the Mosquito Fleet ferries that serviced the island provides an opportunity to learn about the island’s Native American, logging and maritime history. In 2018, a kayak paddle of Blakely Harbor supplemented the steamer cruise, to learn about the harbor’s history and marine life.

From its vantage point in downtown Winslow, the school-bell cupola is visible on top of the little red schoolhouse turned historical museum. Over a century later, the building is still serving its original purpose — teaching lessons to everyone who enters its doors.