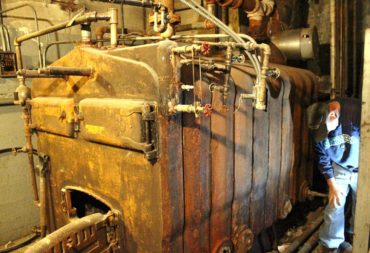 “Frighten, alarm, scare, terrify, appall, to arouse fear in people. To frighten is to shock with sudden, startling, but short-lived fear.”

Suppose it would apply here, to this particular boiler, installed by Burlington in 1922 in the Thomas Harlan building. Harlan was a Seattle architect who designed four identical commercial buildings in Bremerton, but none held the drama as this building — my building in the heart of downtown, at 4th Street and Pacific Avenue in Bremerton. 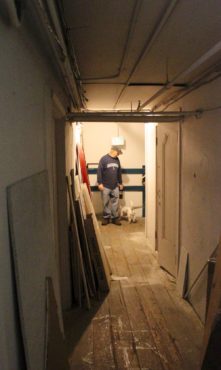 While writing on the subject of art and this building, I have previously mentioned the boiler and that it has always attracted attention. So much so that groups have arranged tours and individuals have requested photoshoot opportunities. 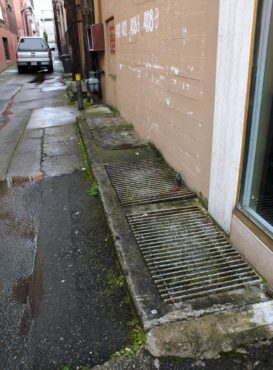 Building history photographer Greg Salo was fascinated with the boiler while on a group tour, and later did a photoshoot of the entire building. Even movie producers have stepped in to take advantage of the fright aspect. It was fun watching one film director bringing in a half dozen actors who did their horror film stuff on and around the massive boiler.

Probably best that I take you to the beginning. Bremerton was practically empty, a ghost town. In 1990, the Bremer Trust put up “for sale”signs and waited for hoards of excited potential buyers. Not only was I first in line, I was the only one in line! 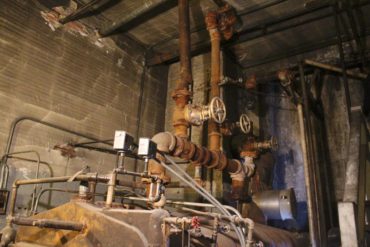 The old building had a dank, cold smell to it, as it had stood unheated for some three years. The boiler room had been cleaned and was void of asbestos wrappings. It hadn’t been functional for many years.

During the presale viewing of the monster, I was fascinated but not shocked. I was no stranger to big pipes and valves, having grown up in the family plumbing business, B.H. Allen Plumbing and Heating that was located on 6th Street across from Olson Sheet Metal, between Warren and Park Avenue. 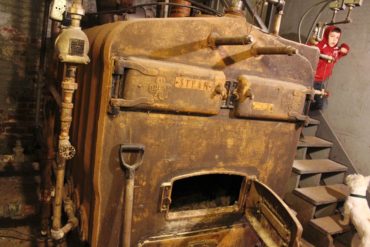 Most who enter that door would gasp. There at the base of the high-ceiling room crouches a creature with huge, protruding pipe arms that seem to flail in all directions.

To see the face of the boiler, one has to go past the antique eyewash and down the wood stairway that hugs the boiler body. Turn right and there is the face of history, still nudged by an old shovel that was probably the original coal shovel.

It is said that the boiler fed steam lines up and out, servicing steam to five other buildings on Pacific Avenue and 4th Street. 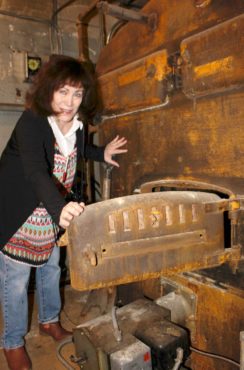 Even having been in the plumbing business, I was not capable of understanding all that I was seeing. At the back of the room is a square-like, concrete structure protruding from the concrete wall, which I am told was a sludge tank, something used after coal. There are a lot of pipes in that area, even under the wooden stairs.

Looking up in that back area, there are bars, and what must have been a ventilation window. Same location, look down and there is a sump pump. 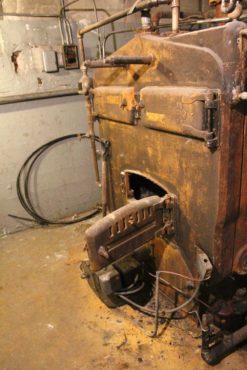 The first time we had the sprinkler system tested, that sump pump was used during testing and flooded the subbasement area, and an oil smell permeated the entire building.

Oh yes, and not to forget, there was an adjoining room, only barely seen through a small, floor-level cutout in the wall. This was the coal shoot room. I don’t know what the original configuration was, but now the only access to that sublower room is by way of a stairway from yet another part of the building.

The concrete floor of the coal shoot room indicated water leakage. From the alley, one can see the start of the coal passage, which then goes down two floors. My husband, Earl, corrected the situation by applying a concrete cover, now seen in the alley.

While in the alley, I will share more novelties. To the west of the coal shoot entrance are four flat grates, each leading to four subwindows that lead to a large store room in the basement. I believe this is the only alley/grate situation in downtown Bremerton. 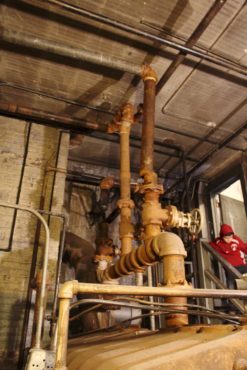 There was one negotiating concession while buying the building, and it was part of the monster story. Coal was used for decades, then sludge and then oil. Where was the oil tank?

That was a big concern 26 years ago, as it would be now. I soon discovered that there was an 18-foot horizontal tank buried in the alley. The alley was narrower than most because of the gas pipes and protruding suballey windows.

I told Olympic College, handling the Bremer Trust properties, that to buy the building, I did not want to be responsible for the tank. They did remove the oil tank.

I didn’t see the removal. Vic Ulsh of Bradley Scott, who was selling me the building and did see the removal, said the 18-foot tank looked just like a submarine. Thinking back, I wonder if it was.

We were both very concerned about getting the humongous oil tank out of the alley, but everything worked out great and soon, I opened an art gallery. Now, 27 years later, one can still stand in an alley off Pacific Avenue and see the four flat grate panels to four basement windows to where an old rusty giant sleeps — a monster you know.