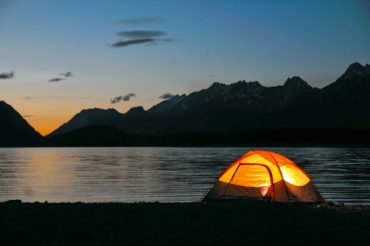 A tradition dating back a hundred years, summer camping is the quintessential family experience.

For some, it’s the allure of a cheap getaway, as far as vacations go. For others, what makes the idea appealing is the promise that at the end of a short road trip is a wondrous place where time crawls. Where you can sleep under the stars, take in majestic sights and huddle around the campfire roasting marshmallows, not a care in the world.

These days, camping may have another draw. Deep in the woods, it’s one of the few places where — even if not by choice — you can escape the grips of a 24/7 connected lifestyle.

Whatever the reason, the appeal of camping has been growing. The number of Americans camping is going up, and millenials are driving that growth, according to a 2017 independent study by Kampgrounds of America (KOA). Gen Z is equally enthusiastic, KOA found.

“Camping grows on you,” says 18-year-old Robert Quill, who’s accumulated an estimated 40 nights worth of camping during his six years with Boy Scouts Troop 220, based on the Key Peninsula. “You’re in the wilderness, away from the noise, and you get to see some of the best views in the world.”

So Many Places, So Little Time

Convenience, of course, is a perk for those living in West Sound. A mere 15-30 minutes takes you to one of the many campgrounds sprinkled throughout the greater Kitsap Peninsula. Drive for one to three hours, and you have almost a million acres worth of exploring to do — in the Olympic National Park.

With its 900 miles of hiking, 73 miles of hikeable coastline and lush rainforests, it is the third-most-visited national park in the western United States, according to the Olympic Peninsula Visitor Bureau. And here it is, practically in West Sound’s backyard.

“It’s one thing to see pictures and another to watch deer cross in front of you or see the waves crashing,” says Quill, who considers the Olympic Mountains his favorite camping area.

Last year, Quill and his father, Chris, took a five-day backpacking trip hiking 40 miles through the Olympics, starting at the Tubal Cain Mine trail, over Mount Buckhorn, through Marmot Pass and over Mount Constance, ending up in the end at the lower Dose Forks campground. Some of the rugged trail they hiked gets few human visitors, so the pair were treated to rare views. During one part of the trip, Quill recalls looking out at Mount Rainier from the top of Mount Constance and thinking it looked just like The Lonely Mountain from “The Lord of the Rings.”

“The Olympics is a beautiful place, especially in the summer,” Quill says. “[On the trails], you get to see what most people will only see through pictures.”

Things You Shouldn’t Camp Without

Whether you’re planning your own outdoor adventure this summer to the Olympic Mountains or closer to home, take a page from the scouts, who are known around the world for their “Be prepared” motto. A successful camping trip starts with packing the right gear and supplies, and you may be surprised to find a few things on this list that you’ve never considered.

First things first, there are 10 essentials. At least if you’re a Boy Scout. If you haven’t packed these things — and a pre-trip inspection will discover if you haven’t — you’re not ready for camping:

The rain gear may seem superfluous when the temperatures are balmy and the skies clear. But don’t underestimate the Washington weather, cautions Bruce Quaintance, committee chairman with Boy Scouts Troop 1523, chartered at the Bethel Grange in Port Orchard. Quaintance, who has advanced wilderness training, has been involved with the Scouts since the 1980s, when his son joined the Cub Scouts.

“Rain gear is the most important thing,” he says. “If you live in the state of Washington, you want to own Gore-Tex because you’re going to get rained on.”

He recalls one particularly rainy trip during the third week of August (the hottest summer month) to the Olympic Mountains.

“It rained so hard, it took out the trail,” he says. “There was no place to get shelter so everyone got wet.”

Other supplies Quaintance doesn’t leave without include a blue tarp, water tablets or purifier, three days worth of nonperishable food and 50 feet of rope or twine. And if he really wants something extra for convenience, he’ll pack his backpacking lantern. 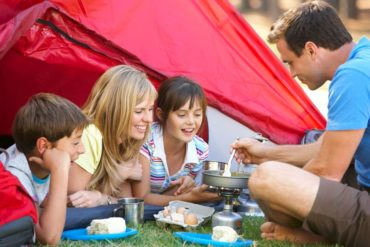 “On every trip, I’ve used everything I’ve taken,” he says.

Rope or parachute chord and duct tape are two items many campers don’t pack, but both are versatile tools that can fashioned for various uses. Duct tape may be self-explanatory — as the saying goes, there isn’t much you can’t fix with it — but rope?

“You’d be surprised what it can be used for when you get into a situation,” Quill says. He names a few uses for rope that come to mind: “You can tie up food or broken bags, tie up a tarp, make a handle to hold something, fix your shoelace.”

The blue tarp turns out to be just as versatile.

“You can use it as an emergency shelter. You can use it to gather water,” Quaintance says. “We’ve camped alongside the road and put our sleeping bags on top of them.”

“You want a tarp underneath your tent, whether it’s rain or shine, because you never know when the ground will be wet,” he says. “Even if your tent has a built-in tarp, you can’t rely on it.”

Quill also uses tarps to create a cover over his hammock. His camping hammock, which comes complete with a bug net, is his preferred sleeping method — it helps avoid a rocky ground, and it can prove dryer if it rains.

“If you have a tarp draped across the hammock so the tarp is touching both trees and is staked off at each corner, you will stay dry,” he says. “The hammock is like a cocoon.”

Tips for the Novice

Based on his experience with an estimated 30 campouts, Quill offers the following tips for the novice:

Quill, who recently graduated from South Kitsap High and has been attending Olympic College through the Running Start program, didn’t do a lot of camping before he joined the Boy Scouts seven years ago. Since then, he found camping to be a great way to learn an appreciation for natural spaces — and the importance of conserving them.

Here are a few local campgrounds to get you started exploring the beauty of West Sound’s nature. (Note: Reservations may be required; some RV-suitable sites don’t have hookups.)

Whether you put up your tent, camp with all the conveniences including electricity at one of the four cabins or bring your RV, you’ll find plenty to do, from fishing and flying a kite to hiking and exploring the beach and enjoying the views of the Olympic Mountains.

Popular for off-road vehicle riding and horseback riding, these DNR-managed forests are perfect for active recreation while you camp. Fishing, hiking, hunting and mountain biking are some of the activities, plus some areas have gorgeous views of the Olympics, Mount Rainier and the Seattle skyline.

The park is perfect for those who love geocaching or want to launch a boat, but offers numerous other activities and amenities, such as a kids’ playground, a 350-foot dock, fishing, paddling and more.

Another romantic setting, Manchester has unique features such as an old torpedo warehouse and a mining casemate. Things that will keep you busy include horseshoe pits; volleyball net trails and a 3,400-foot shoreline where you can kayak, swim and fish.