People on the Walls

Magic of sorts — the delightfully unexpected — happens as life seems to pause once in a while to say, “Have you tried this?” And we did. It was called the PaintPeopleProject. Some 20 professional fine artists and photographers, not all knowing one another, gathered to paint life-size people right on the walls of a Bremerton gallery.

But to share the story with you is like placing a bolder in a teacup — impossible, you would say, and you’d probably be right. Sometimes, just sometimes, life moves to expose a moonlit passage, leading to the bowels of a huge, old commercial building. That would be my 14,000-square-foot commercial building that for 26 years housed the Amy Burnett Gallery along with other businesses. This is where the Navy museum took 8,000 square feet for four years, Purpose Boutique began its successful enterprises and artists and musicians rented spaces throughout the years.

Follow me now, where magic and mystery take us down a somewhat wide stairwell to a 17-by-50-foot space with a black-and-white checkered floor, white walls and an unfinished black ceiling. I can still hear musicians Bub Pratt, Aaron McFadden and Mark Lewis performing on the back stage area while many artists painted and exhibited art.

On this day you will be surprised to be greeted with a studio of created life-size people, all different with little rhyme or reason from one to another. Guessing a theme would be impossible. 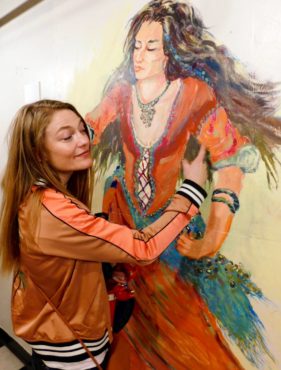 There was little direction, as I did a call for professional artists, saying “Come paint on the walls; just no politics or anything that would get me arrested.” The diversity of artists was exciting, from card maker Susan Parker, to contemporary figure artist Mary Doyle, to story illustrator Karna Peck. 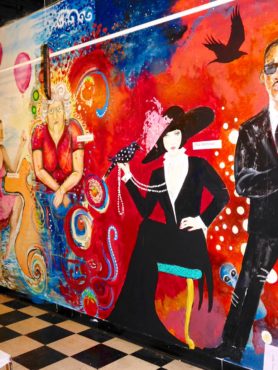 Award-winning artist Juan Rodriguez directed the PaintPeopleProject and included his 5-year-old son, Israel. A strange lot we were — as different as apples in a nut bowl — but on that beginning day, we put paint to wall and started to become “one.” I met Kay Robinson and Mariah Hunt that initial day, and they were the first to jump right in. Sweet, confident and aggressive, they claimed a wall space like prairie dogs on a prairie mound. They were hot-good. I asked Mariah why she was here, for a project that offered no money. She said, “Inclusion.”

Photographer Glen Wilkerson was excited to be invited to join in the PaintPeopleProject. Filmmaker and photographer Terry Moyant, a newbie to Bremerton, also wanted to get involved. He is an older gentleman with the heart of an excited child and wanted to get back into filming. He had previously worked for and with the likes of art deco great Erté and Dale Chihuly. 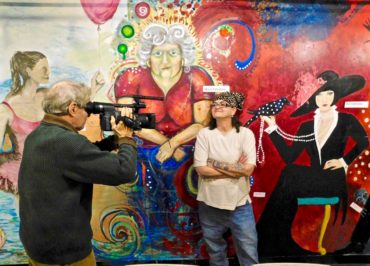 We gathered every Saturday and some days in between, and the space began breathing with invisible-like threads where webs began encompassing the project. Tattoo artist Lana Shepherd’s painted woman was large, friendly and bizarre — a few of us took notice, as it was the portrayal of an artist friend who had committed suicide the year before.

There were no rules or obligations, and some could only paint on occasion due to work, family illness or personal situations, but that was OK. If an artist started and couldn’t return, someone would take over.

The project took on a life. Gallons and gallons of personal and donated paint, brushes, tape and plastic vessels were piled on two central plastic-clad tables. We were like wildebeests scrambling for desert water, going from one gallon to the next, trying to find usable paint and any color besides beige. It was a mess, and we became part of the mess. How could it be explained? 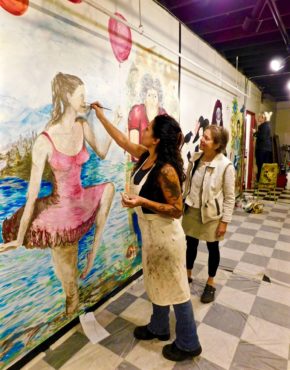 Talking about each artist is difficult, for a novel could probably be written about each one. I messaged project artist Shelly Wilkerson to help me describe well-known artist and novelist Diane Gardner. I didn’t know her well, but knew she was dynamite successful. Then I realized that I was asking an equally famous artist, nationally recognized for her paintings of cats, old people and wine. Shelly had a gallery in the building for several years called Crazy Lady Gallery. Another project artist, Angela Perryman, also had a successful gallery, Clayworks, in the building. 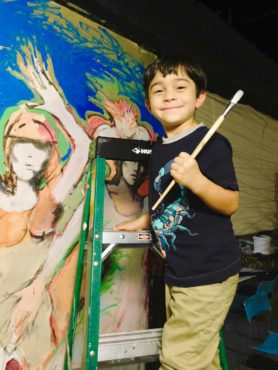 On Saturdays after Saturdays when we met, the room energized us, especially with Ana Lopez, Paula Gill and Jennifer Chamberlain’s figures seeming to dance off the walls.

The delightful unexpectedness of the project was probably more happenstance than magic. Without rules or audience, artists were quite free with application.

Some artists were highly educated, while others were beginning the art experience. Retired businessperson Sally Gliver was two years into her art studies but had never painted a figure in her life, let alone a life- size person on a wall. With brush in hand and ladder by her side, we put her in front of a blank wall and said, “Have fun.” Shyness dissipated in seconds. 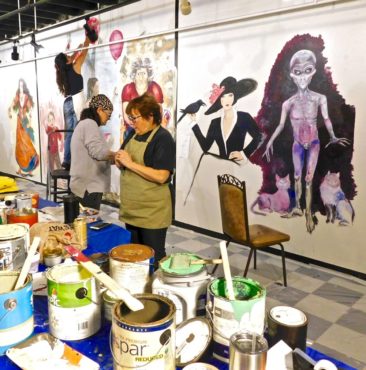 The PaintPeopleProject had no monetary gain or exposure benefit. The room came alive, with encompassing webs that connected and created a whole. First-time visitors would walk down the stairs and literally gasp with amazement or shock. It was then we realized that what we were doing was not the norm. Even those friends and visitors became part of the installation, furthering the performance. 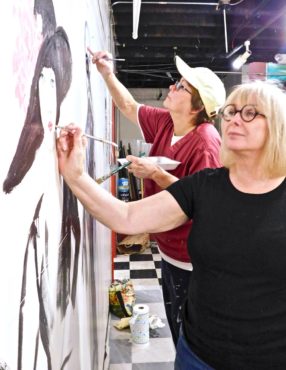 We were too close to the magic to realize it was magic. Even now we shake our heads “no,” “not quite there.” That gallery space resonates texture and movement — all the elements of design seem to have landed down in the basement of an old, Navy city building that once was an arena that sold shoes and dresses in the ’60s.

Here was a gallery as modern as could be, with white walls, an industrial black ceiling and a stark black-and-white checkered floor. Many artists exhibited over the years, but nothing like what happened with this project. The once-minimalist space now appears to hold the minds and hearts of many artists, as if a magician waved her magic wand, and a trillion colors, painted faces and ribbons fell from the sky, filling the space like a waiting water bucket.