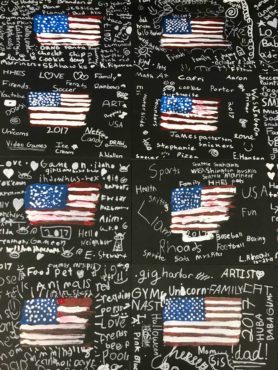 Back in 2003, Gig Harbor resident Marla Morgan decided that she wanted her kids to have art classes in their school. The children were students at Harbor Heights Middle School in Gig Harbor and Morgan was active in the school’s PTA.

Suspecting that other parents might have similar desires for their kids, Morgan invited a group of parents, teachers and friends to her home to brainstorm ways to create an art program in the school.

“It was a great mix of people,” she said. “And we all shared the same goal.”

They called their idea “Peninsula Hands On Art,” a name suggested by a Harbor Heights parent who’d been involved with a similar program in California.

“At first our focus was just having art for our own kids at Harbor Heights,” Morgan said. “But it turned out to be so successful that after a couple of years, we thought, ‘Why couldn’t we do this in every elementary school in the district?'” 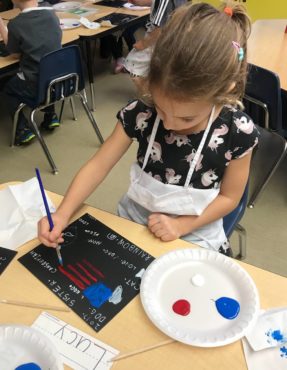 In the 14 years since that first brainstorming session, Peninsula Hands On Art has followed that dream and now its volunteers teach art to approximately 4,000 students every year in all eight Peninsula School District elementary schools.

Kit Kuhn, who was recently elected mayor of Gig Harbor, was one of PHOA’s co-founders along with Morgan.

At that time Kuhn himself was an artist — a successful jewelry designer and fabricator with a store on Gig Harbor’s historic waterfront. He was more or less the “artistic” member of the group.

“We really had more questions than answers back then,” Kuhn said. “And more hope than history and hearts much bigger than our budget. But we also had a lot of passion and lots of ideas.”

Both Morgan and Kuhn were quick to note that there have been many, many people involved from the very beginning, and everyone has contributed to what PHOA has become. 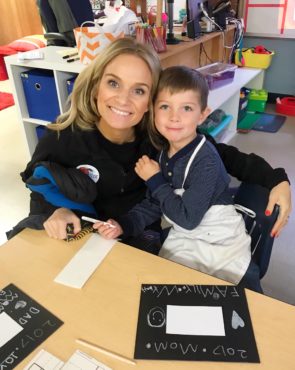 Four from the original group, including Kuhn, were professional artists who belonged to the Gig Harbor Gallery Association.

“At that first meeting at Marla’s house, the artists got together and brainstormed for about 20 minutes and came up with the idea for our very first project — how to draw a salmon,” Kuhn said.

The drawing lesson included a study of salmon anatomy — gills, fins and all the other parts — and a discussion of the salmons’ lifecycle and its importance to the traditional cultures of the Northwest.

“We mounted every salmon picture on boards and hung them all around the school,” Kuhn said. “It was so successful that we put together a spring art show at the school to show off the kids’ work.”

The next year, the gallery association did a fundraising project using salmon sculptures. Artists decorated 20 or so large fiberglass salmon and placed them in businesses around town, then auctioned them off.

“We were looking for a local cause to support and decided to split the money we raised from the auction with Hands On Art,” he said. 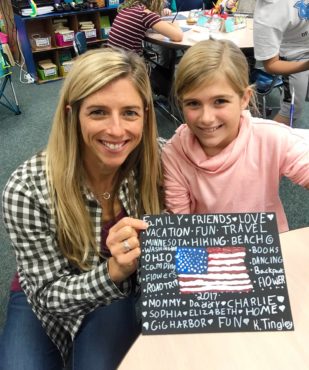 That amounted to $60,000, and PHOA’s half provided a huge boost to the fledgling, all-volunteer organization.

In 2005, PHOA incorporated as a Washington state nonprofit and next year, it put together five art projects at Harbor Heights while also adding two new schools, Artondale and Voyager.

Ten years after the program’s inception, Purdy Elementary School, with 650 students, was the eighth school added to the roster. That “closed the circle,” and now every elementary school has an art program, Morgan said.

Two private schools also participate in Peninsula Hands On Art. That means about 4,000 students every year have opportunities and training to create art.

“Since we began 14 years ago, Hands On Art has taught more than 170,000 art projects,” Morgan said with a touch of pride.

Every project is taught during school time. There are no after-school projects because that might mean that some kids wouldn’t be able to participate. 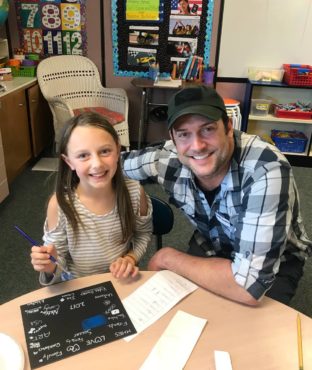 Everything is free and all materials and supplies are provided by the nonprofit.

“Our goal has always been to create a community of young artists that embraces the artistic talents of every child,” Morgan said. “We believe that students across all socio-economic backgrounds should have the same educational opportunities and access to quality materials and art education.”

Peninsula Hands On Art got another boost in 2015 when the Peninsula School District agreed to provide space and financial support.

“We’d been growing slowly and responsibly and we had grown so much that we needed to hire an executive director to run the program because Marla just couldn’t continue to do it as a volunteer,” Kuhn said.

After an extensive search, the district hired Morgan as director. “She’s the perfect person to run the program because she’s been doing it all along and she’s very balanced. And she really energizes people,” Kuhn said. “She builds a team and keeps them motivated and feeling good about themselves.”

Under the PSD umbrella, Peninsula Hands On Art has launched a new way of teaching each project to the volunteers. 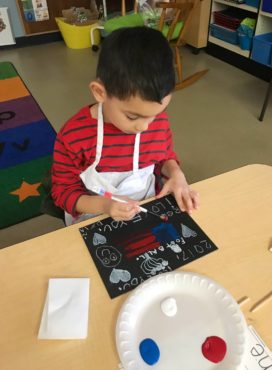 The artist who’s putting the project together is filmed while demonstrating, step-by-step, the process of creating the artwork. Then the film is shown to all the volunteers during several training sessions.

“Maureen Reilly from Seat of the Pants Productions does all of our video work,” Morgan said. “She’s creative, inspirational and visionary and makes those short films come to life. Our program has really been taken to the next level with her dedication and hard work.”

During the school year, PHOA hosts training sessions for each project. Parents from each of the 185-plus classrooms view the current project video, meet the artist and practice making the artwork.

The artist is on hand to answer questions and give tips about how to present the project in the classrooms.

Then each volunteer has seven weeks to coordinate with the designated classroom teacher and decide the best day to present the project.

Each project is budgeted carefully to keep the costs to the bare minimum and still maintain the artistic quality.

“We get great support from all the teachers and the school administration. The teachers do a wonderful job of providing time to do art. I think everybody recognizes the quality of our projects and how much the kids enjoy them and benefit from them.” 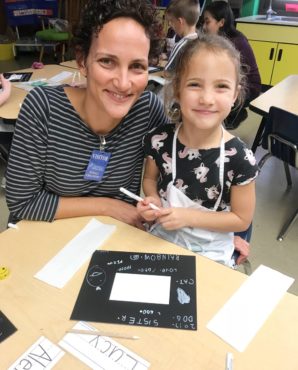 In the two schools that have art teachers on staff, Purdy and Minter Creek, PHOA doesn’t replace their efforts.

“We just fill in the gaps so that every kid in the school has a chance to create art,” Morgan said. “Sadly, the district can’t afford to staff an art teacher in every school for every classroom, so we’re there to make sure every kid gets an art experience.”

The first, which took place in November and December, incorporated words into paintings of the American flag.

Artist Tracy Fisher designed the project that shows how words can be used as art and teaches the children how to design and paint a flag. Students also learned a bit of American history in the process.

The next project is being developed by internationally known sculptor Mardi Rees. Rees will show how to use wire to create sculptures, based on the art of Alberto Giacometti. The kids will learn about Giacometti and will make their own small sculpture while they learn about “gesture” and the concepts of positive and negative shapes in sculpture. 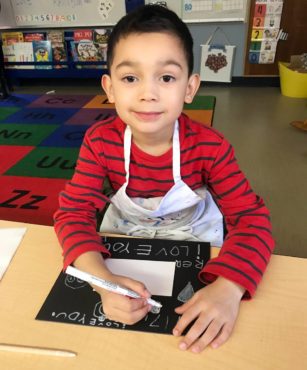 In the spring, Tiffany Place will demonstrate how to create a “Hokusai wave” using pastels. That project will focus on shading techniques and the concept of warm and cool colors. They’ll also learn a bit about the artist’s life and Japanese culture.

The final project of this school year will be “The Perspective of Mount Tahoma,” presented by Krysten Deady. Students will make their own paintings on fiberglass squares of Mount Tahoma (Rainier) while learning about perspective and point of view.

In the copper necklace project, students got to use an actual anvil and ballpeen hammer. “They sat on the classroom floor and pounded and forged their own little copper necklaces that they gave to their moms for Mother’s Day,” Kuhn said.

Most projects are repeated every six years or so, so that every elementary school child gets to do almost every project, Morgan said.

Three rules govern every Hands On Art project, according to Kuhn.

First, no one touches the child’s art but the child. “That means that if a child has a question or needs a bit of help, the teacher demonstrates the solution on their own piece. They don’t do it on the kid’s artwork,” Kuhn said.

Second, there’s no right way or wrong way to do a project. “Every kid is allowed and encouraged to do their project their way,” he said.

And, perhaps most important, everyone is included — so no child is left out or overlooked.

Peninsula Hands On Art is supported by the efforts of hundreds of volunteers and by grants and private donations. To learn more, visit peninsulahandsonart.org.