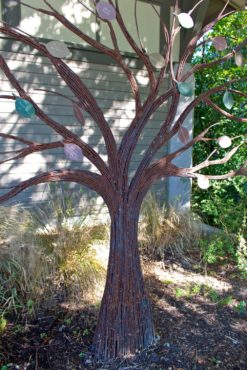 Bapatoms is all about home, family, creativity, plasma cutters and a MIG welder. Of course, it is also about metal, lots of metal! The name came from a creative grandchild who couldn’t quite say “Grampa Strom” and substituted “Bapatoms.” 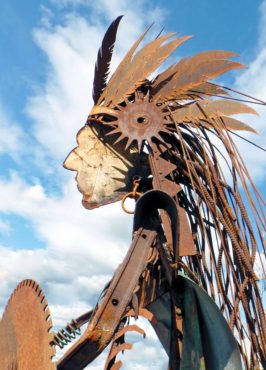 With extraordinary energy and an imagination formed during a childhood in the style of Tom Sawyer, owner Dick Strom is a creative genius. He and his brother spent many summer days, years ago, roaming forests and beaches near Madison Bay on Bainbridge Island. Now 71, Strom lives with Bobbi, his wife of 48 years, on the same property where he grew up. As a kid, he could walk to the bay from his backyard, but now the area has too many homes and fences to do that.

With humility and a dry sense of humor, Strom shares his workshop, garage, metal yard and a garden created by Bobbi. Thanks to his talents with metal sculpture, a sense of whimsy permeates that beautiful yard. Sculptures of sunflowers, a salmon made of horseshoes or a metal Japanese kimono seem like they might dance off to another spot as soon as one’s back is turned. An about-to-be restored, 1947 Buick convertible dozes in a covered, shady corner of the yard with a recently used bird’s nest perched on its right front bumper. 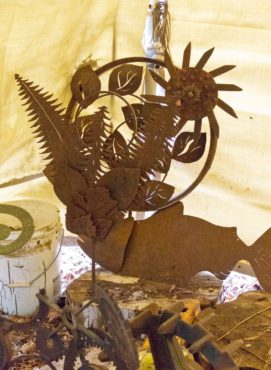 Strom’s garage is clean, neat and fully packed. Posters and pictures cover the walls, mugs hang above windows and a collection of oil cans line the windowsills. His wife’s spotless 2003 red Corvette convertible is in one corner. Their oldest grandson, Cruz, drove Strom in it as a part of last year’s Fourth of July Parade in Winslow after the Bainbridge Island Chamber of Commerce named Strom Citizen of the Year.

In two other corners are antique cars, including a 1930 Model A Ford panel delivery truck that cost $150 before it was restored in 1968, and a 1950 Studebaker Starlite Coupe.

“Starlites were often maligned as being so ugly that few people considered purchasing them, but they were simply far ahead of their time,” he says. He and his son, Aaron, rebuilt this one for Strom’s youngest daughter when she graduated from college. 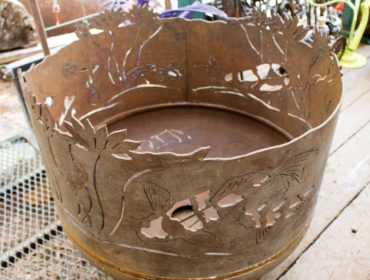 The Stroms owned and operated Modern Collision Rebuild and Service for 35 years, but it is now owned and run by their two sons, Aaron and Micah. Aaron, the youngest, does the body work and enjoys restoring cars in his scarce spare time. They have many projects in mind, but these days, most of Strom’s time goes into his metal art.

Early on, he used items gleaned from a former dumping site known as Grizdale’s Fill, where old car parts, junk and dirt eventually made up the base for what is now a paved road. There was once an entire Model T Ford partially buried there. Strom rescued a Model T engine crankshaft from the Fill and incorporated it into his first salmon sculpture. His later versions of salmon, which became very popular, use lighter metals so they can be safely carried home. 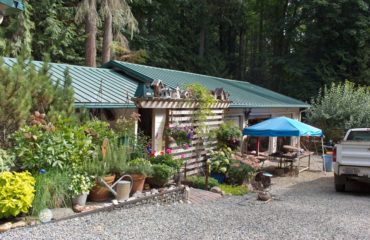 The couple still travels all over the country in a pickup with a utility trailer to gather metal from swap meets and antique markets. In Pennsylvania, Strom found some old, portable Singer sewing machines that he turned into what he calls Grandma’s Tractor.

At the Rose Bowl Flea Market in California, he found Spanish-style filigree metal that he uses on some of his gates for house yards, gardens or just decoration. Those gates, often enhanced with glass flowers created by local glass artist Kuy Hepburn, have become very popular at the Bainbridge Island Farmer’s Market and beyond. 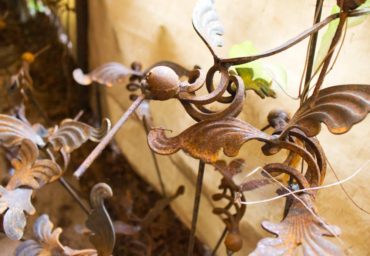 Strom has a knack for seeing possibilities in all the many pieces of metal he has collected, some organized in old (legally obtained, of course) Thriftway grocery baskets in a corner of his yard, others neatly arranged in piles, some in tents.

When asked where he gets his ideas, he shrugs, saying he usually “just starts laying out pieces of metal and it just works.” Horseshoes become a fish, a Model T timing cover becomes the center of a flower with horseshoe leaves, and truck tire split rim rings become circles balanced on each other at angles. He is, incidentally, proud of the fact that he still has all his fingers after releasing all those split rim rings from their truck tires. 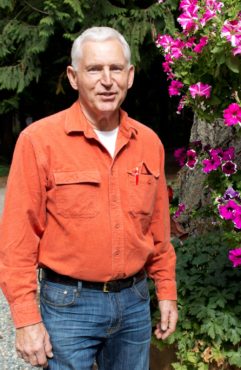 He also uses metal from antique wagon wheels, some up to 150 years old, as surrounds for his fire pits. That metal will still be good for many years because the wheels were hand-formed and hammer-welded together. He smiles as he says his goal is that his art work will last for at least 35 years so that he’ll be long gone before they begin to break down. 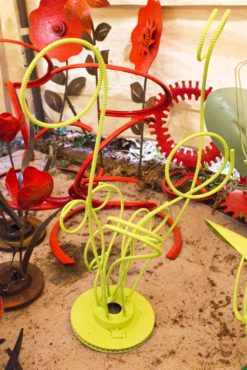 One particular project has been on the drawing board of his imagination for some time now. Near where the Stroms often spend the winter in Borrego Springs, California, a 350-foot dragon snakes along a road. Strom plans to make a smaller version for Aaron, who already enjoys having an 8-foot metal alligator and a metal horse from his father in his yard. When the Wycoff Co.’s creosote plant closed, Strom salvaged a metal track they’d used to move little railroad cars and he plans to make it the dragon’s backbone. 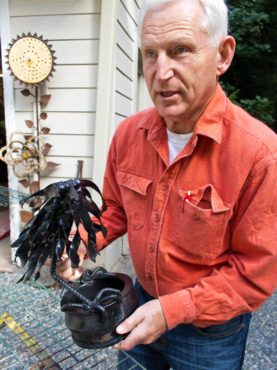 There’s much more to Strom’s work than what can be seen in his yard and at the farmers market.

“Most of my work is commissioned pieces, with many gates, arbors, fencing, handrails, signs, interior stove surrounds, planters, table bases, trees, repairs of metal pieces, and the like,” he says.

Unless he has a special order from a customer, he likes to work on whatever calls to him at the moment. That could be a fire pit made from an old propane tank or a fuel oil tank finishing out its existence as a cat or a stylized dancer full of joy and movement. Dick Strom’s imagination has no borders, his energy no bounds and his talent no equal. 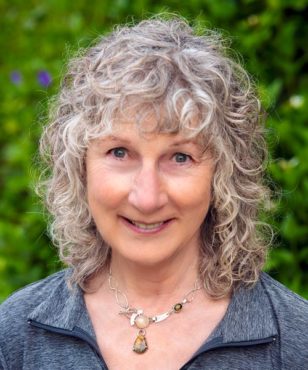