Good for Body and for Planet — Clean and Green 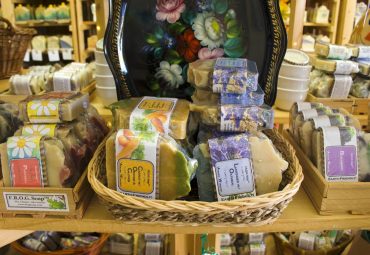 There isn’t much that Laura Kneib can’t make by hand. Clothes. Butter. Wood boxes. Pottery. Growing up in a family that made anything from their own clothes to herbal remedies has taught her two things: You make everything you use, and then you reuse.

She recalls her parents going “senging” — harvesting ginseng — on Sundays at their cabin in the West Virginia mountains.

“I’m a product of parents who were children of the Depression era,” she says. “I was raised to make things and cook from scratch. So much of what I know was from mom and dad.”

One of the things she learned to make from her mother was soap. The hobby stayed with Kneib since she was 14. And for the past five years, her passion for green living — and for soap making — has bloomed into a business that has customers around the world. 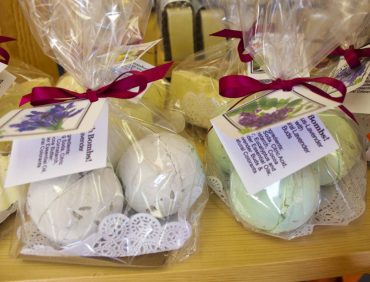 F.R.O.G. Soap was born as a challenge question while Kneib was having breakfast at a restaurant and watched someone dispose of the cooking oil from a fryer.

“I had to see if I could make soap from grease,” she says.

The question started a yearlong quest to figure it out. Soon after, she was off selling soaps at farmers markets and online. 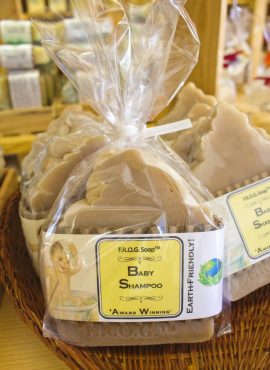 “We are bursting at the seams,” she says. “And I need another me in here.”

Which is why she hired a helper earlier this year. Ellen Bruton moved to the area when her husband became stationed here with the Navy. She and Kneib share something in common: Bruton is studying commercial graphic arts at Olympic College. Kneib was a graphic designer in her former life. 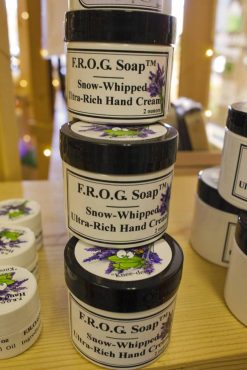 “Ellen wandered into the shop one day and said she always wanted to make soaps,” Kneib says. “I’m teaching her everything.”

F.R.O.G. stands for “from recycled oil and glycerin,” which is a description that doesn’t quite do the soaps justice. Besides the fact that she doesn’t use chemicals like laurel sulfate, Kneib adds essential oils for the scents (as well as some high-end fragrance oils) and ingredients found in nature — anything from lavender and charcoal to sand and saltwater. The dyes are natural too.

“If you can’t pronounce it, it shouldn’t be in your soap,” she says.

She’ll grind carrot or cucumber in a blender then add turmeric to maintain the color. Or she’ll paddle out from her home on the beach to harvest sea lettuce. The signature Puget Sound soap actually includes Puget Sound water, as well as sand and sea lettuce. Another soap, Heart of Gold, has sand complete with gold specks from an old Arizona gold mine. 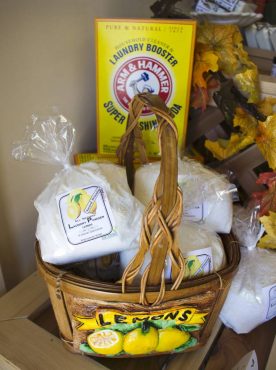 It’s not just the ingredients that make the soaps unique. They are also pretty — Kneib adds interesting designs as well as shapes. Some even look (and smell) like cupcakes or have a seasonal theme.

All the magic happens in a small back room that’s about 12-by-12 feet. There’s no cooking since Kneib uses a cold process. But because lye is one of the ingredients, the soaps have to cure for an entire month.

New ideas come from customers or simple inspirations like food.

“Lack of space keeps some ideas from being implemented,” Kneib says.

Kneib shares her knowledge freely. It’s not unusual for her to get asked for tips or advice by someone from another part of the world. She also teaches classes and workshops, including one on how to render bacon grease into soap at home. 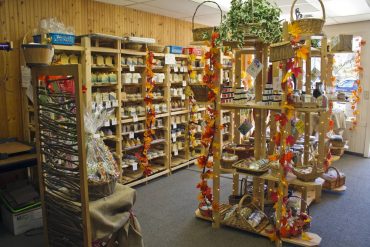 Green All the Way

The idea of reusing has stuck with Kneib as much as the idea of making things from scratch. Besides reclaiming cooking oil, she does things like making pretty packaging out of cardboard and recycling wood pallets into shelves, curing molds or soap “decks” (holders).

“We reclaim as much as we can,” she says.

She estimates that the business has recycled about 5 tons of materials over the last three years.

“That’s why we’re here,” she says, “to do it without chemicals and be as Earth-friendly as we can.”