The sons of two American legends were drawn to one very special home on the shores of Bainbridge Island's Manzanita Bay.
December 26, 2008 - People & Places - Comments:
Text by Wendy Tweten Photography By Tom Woltjer 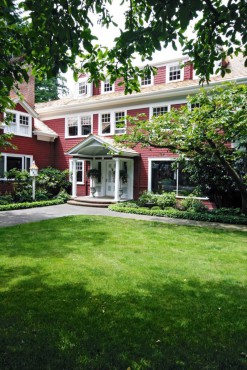 By their hundredth year, houses, like humans, have a story to tell. However, while all old-timers have a personal perspective on the past, few have been touched by the history of a nation. On a rise overlooking Bainbridge Island’s magical Manzanita Bay, one such architectural time capsule brings the American experience home to Kitsap County. The provenance is irrefutable, but, as with many centenarians, the details have become a bit hazy.

This much is certain: The sons of two of the most prominent men of their day found refuge in the same island hideaway a generation apart. The first was George Westinghouse III, only child of George Westinghouse, Jr., an inventor and industrialist at the turn of the last century. Nearly 30 years later, Jon Morrow Lindbergh, the son of aviator and environmentalist Charles Lindbergh, would follow.

Since its construction in 1908, the home has changed hands at least nine times. Architectural icon it may be, yet this heritage home is no wheezy museum piece. In the care of its current owners, Richard and Barbara Ramsey, the house above the bay is just hitting its stride. 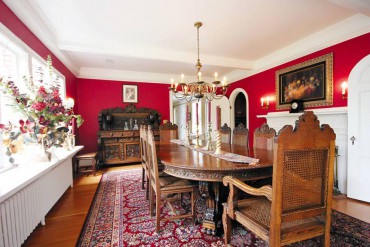 The Ramseys first rented the waterfront house upon their move to Bainbridge Island 12 years ago. Having no particular interest in historic homes at the time, the couple chose the seven-bedroom, six and a half bath three-story simply as one of the few homes big enough for a family of six. Though the Ramseys originally planned to build a home of their own, they came to realize they had fallen for the island landmark and purchased it instead. Their ownership couldn’t have been more fortuitous: Richard Ramsey, a contractor and owner of Ramsey Construction, had the experience to maintain the residence while preserving its pedigree. Barbara brought an eye for interior and landscape design, and an admiration for authenticity. 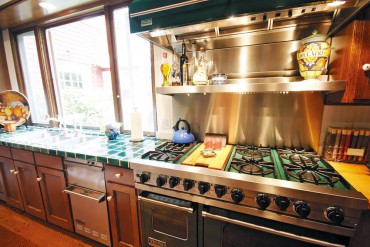 “It’s a point of pride that you get to touch it, even if you’re just working on the plumbing,” Barbara Ramsey said. “Our home has a significant history that we’ve been lucky to be part of. We feel that as the current stewards, it’s important to do justice to that history by caring for the house and property in the best possible way to maintain its character and preserve its history.”

Respecting the original architecture and fixtures, the Ramseys have nonetheless made the house their own by filling the rooms with up-to-date, elegant furnishings. Little bits of the past peek out at every turn in the form of crystal doorknobs, plaster walls, arched door frames, fir floors, and the original windows — some leaded. In the living room, vintage sconces and a solid fir bookcase hearken back to an earlier era. Four fireplaces are all wood-burning “The way a fireplace should be,” says Barbara and used regularly. The maids’ quarters on the third floor serve as small yet scenic bedrooms with epic water and garden views. Each bedroom is equipped with its own sink, and all bathrooms boast pristine, 1920s fixtures, including porcelain in the astonishing hues of pink, lavender, and blue. Though the old coal-fired boiler is no longer in use, it remains in the basement as a souvenir of a bygone era. 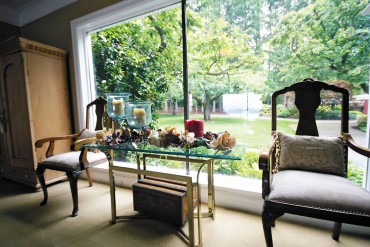 On the grounds, 100-year-old apple trees and 50-year-old rose bushes have been recently joined by beds of modern perennials planned and tended by Barbara. Extensive lawns and patios open the house to dramatic Manzanita Bay and Olympic Mountain vistas. Down at the shore, a private dock is a smaller version of the one from which the Westinghouses once fished.

The Ramseys have collected all the history they can on their stately home. Unfortunately, a box containing records and memorabilia was retained by former owners. But visitors often drop by, many interested in a house they or their ancestors once called home. Surprising tidbits are always coming to light: Did the property actually serve as a blue fox farm during the height of the fur fashion? 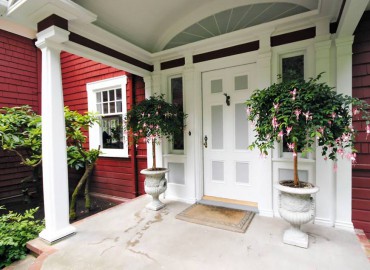 Toward the close of the 1800s, the hill above Manzanita Bay held a modest saltbox-style vacation cabin belonging to Robert Magner, commodore of the Seattle Yacht Club. In 1908, Commodore Magner had the original house built with a perfect bay view from which to admire the sailboat races held by his club. It’s speculated the home may have been constructed from a ready-to-assemble Sears Modern Home kit, customized to his specifications.

Robert Magner’s marriage ended in divorce, but the couple’s twin sons continued to live in the house with their mother until her death. It was then, in 1928, that the property was sold to George Westinghouse III, son of the renowned East Coast industrialist.

According to Westinghouse’s grandson, George Westinghouse IV, a real estate investor in Atlanta, the family owned at least six houses from Vancouver, B.C., to Arizona to the Bahamas. Westinghouse III, his wife, Violet, and their six children lived a nomadic life, moving from one home to another for protection from the epidemic of abduction that plagued wealthy families at the turn of the century. In those days, the only way off Bainbridge Island was by boat, until the opening of the Agate Pass Bridge in 1950. 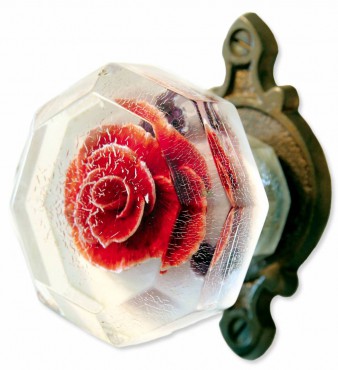 Westinghouse upgraded and enlarged the house to 6,750 square feet, bumping out the third-floor dormer, affixing a south wing, and replacing the back porch with a tiered concrete patio. He also purchased the surrounding 200 acres — most of the land above Manzanita Bay. His Georgian-style mansion had become an island estate. 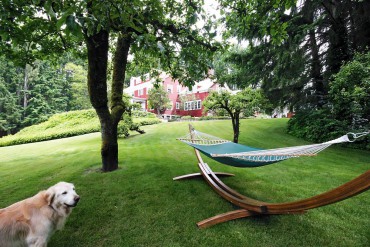 The Westinghouse family owned the house at Manzanita Bay until 1936, when, legend has it, a kidnapping in Tacoma proved too close for comfort and the family left for Vancouver Island in the middle of the night, selling the house “for a song,” according to Bainbridge historian Jerry Elfendahl. Interestingly, George Westinghouse III made Vancouver, B.C. his home in his final years, passing away there in 1963.

Ironically, considering the former owners’ fear of kidnapping, the next notable resident of this heritage house was Jon Lindbergh, the eldest surviving son of American aviator Charles Lindbergh. From 1964 to 1984, Lindbergh, his wife, Barbara, and their six children enjoyed the island life: swimming, fishing, canoeing, even lobster farming, which started in the basement, and ended with the crustaceans going claws up upon their release into the bay. And, yes, Charles Lindbergh visited the estate. 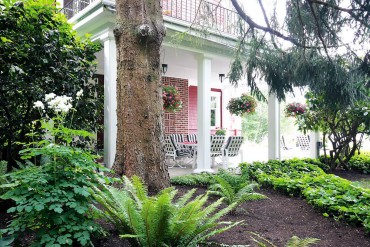 The Lindberghs made only a few changes to the house, adding a picture window in the living room and moving the kitchen to its current location. Jon Lindbergh carved two solid cedar kitchen beams with local themes: sea creatures and blackberry vines.

History Still in the Making

The Ramseys updated their architectural aristocrat with a temperature-controlled wine room in what had once been the kitchen — the original fir paneling transformed into wine racks. Barbara Ramsey brightened the Lindberghs’ 1970s kitchen by raising the ceiling and replacing countertops and backsplashes. However, she left the vintage butler’s pantry as it was in the Westinghouses’ day: birds-eye maple counters, beadboard, ancient dishwasher, mechanical grease catcher, dining room pass-through, and all. 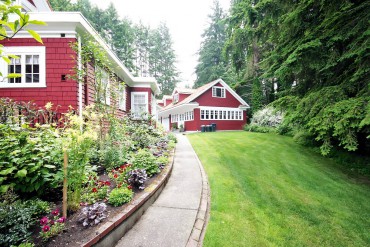 A few modifications have been made: The electricity has been modernized, the master bath renovated, and a generator added. But, overall, the home retains the simple grace of days gone by — more friendly than formidable, a gathering place for the generations.

“This house has taught me a lot: patience, mostly,” Ramsey reflects. “I’ve come to accept that it’s not going to be perfect; the lines won’t always run straight. We’ve come to appreciate it for what it is. It’s a house with a story.” 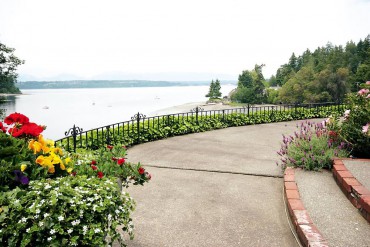 American Icons with a Kitsap Connection

Though his name is not so well-known as that of Westinghouse or Lindbergh, Robert Magner enjoyed his own local celebrity. A shipping company magnate and commodore of the Seattle Yacht Club at the turn of the last century, Magner was an innovator in his own right, reportedly developing the first motor home, which he subsequently drove cross-country. His first wife was forced to live a quiet life owing to a heart defect, and the couple eventually divorced, the ex-wife staying in the Bainbridge house with her twin sons (a daughter died at age 16 in a swimming accident back East). Upon his former wife’s death, Magner sold the property to George Westinghouse. 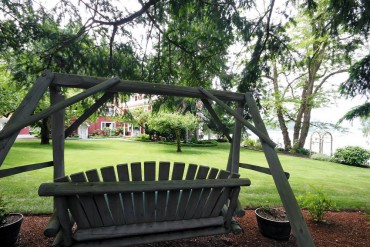 In the minds of many Americans, the name Westinghouse is synonymous with kitchen appliances. (“You can be sure if it’s Westinghouse.”) In fact, George Westinghouse, Jr., founder of the Westinghouse Electric Company in the late 19th century, began his career developing technology for the nation’s railroads. A prolific inventor, Westinghouse registered 361 patents. He was also a pioneer in the fields of electrical transmission and natural gas distribution, and established more than 60 companies in his lifetime. Westinghouse and his wife, Marguerite, had one child, George Westinghouse III. The younger Westinghouse, along with his wife and six children, lived on Bainbridge Island from 1928 to 1936. 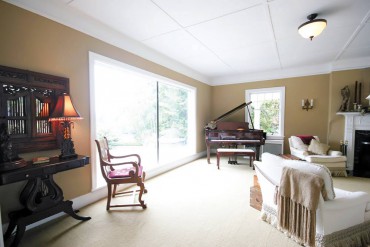 Through a combination of triumph and tragedy, aviator Charles Lindbergh became one of the most well-known American figures of the late 1920s and early 1930s. In 1927, his “Lucky Lindy” was the first person to fly across the Atlantic Ocean, earning a $25,000 prize and a place in history. In 1932, Lindbergh again made front-page news in the wake of the kidnapping and murder of his 20-month old son, Charles, Jr. Jon Morrow Lindbergh, the second child of Lindbergh and his wife, Anne Morrow, brought his family to Bainbridge Island in 1964, where they lived for 20 years.