Devoted coffee drinkers whose day doesn’t start until they get their first cup of brew know what it’s like to miss their morning ritual. Maybe yours entails sitting down on the sundeck, inhaling the addictive aroma and letting the particles slowly work their way through every molecule of your body. Maybe, as the java perks up your brain, you give your body a jolt by practicing your James Brown moves and belting out, “I Feel Good.” Or maybe you live by the motto, “So much to do, so little time,” and you get your fix at the corner coffee shop on your way to work.

No matter how you do it, imagine if you just sit there, peacefully indulging in your caffeine bliss, and at the same time helping make the world a better place. But don’t get all steamed up about it: You don’t even have to trade the time spent going to the PTA fund-raiser, watching “American Idol” or weeding your garden for any of that “save the world stuff” (though most people wouldn’t mind trading the weeding for it). Making a true difference in someone else’s life — and the life of our planet — is as simple as drinking the right cup of coffee.

The Scoop on the Coffee Bean

Coffee grows on a tropical shrub that loves shade, and for centuries farmers grew the coffee seeds (which become green beans once they are dried and hulled) in rainforests. In its natural environment, coffee plants are part of a multilevel plant habitat that includes tall shade trees at the top level and crops at ground level. The ecosystem provides enriched soil, useful insects and birds that feast on the coffee borer larvae — which essentially means the farmer’s voicemail says, “If you’re a pesticide or fertilizer salesman, please place this number on your ‘Do Not Call List.'”

About three decades ago, however, farmers were swept up by a sort of a tech revolution in coffee growing. Much like Henry Ford found a way to produce automobiles inexpensively by creating an assembly line, coffee farmers found that by developing hybrids that can be grown in full sun on big plantations, they could boost their yields significantly. Just like Ford’s idea, which brought high-speed transportation to the masses, had strings attached (think modern pollution), converting coffee farms meant clearcutting forest, destroying habitat for birds and other critters, and increasing the use of chemicals.

Coffee is grown in about 50 countries around the world, mostly in developing countries. As consumer awareness about full-sun growing methods increases, coffee farmers are returning to the sustainable growing methods and in the process provide a healthier environment for their communities.

Make That a Triple Shot

Many shade-grown coffee labels carry a triple doze of “feel good” infusion. In addition to being shade-grown, they are Fair Trade Certified as well as organic. While the three often overlap, they are distinctly different. Fair Trade means the coffee farmers receive fair market price (nonfair trade coffee pays prices that are below livable wages) and importers buy their beans directly from the fair trade certified producers. The certification carries other stringent criteria, but the bottom line is an improved quality of life for the growers.

Organic coffee means it was grown chemicals-free — and the majority of shade grown coffee is organically grown already.

One for the Birds…

As you’re sipping your grande mocha, enjoying the sound of birds chatter, and gazing at the Olympic Mountains or Dyes Inlet, you are probably feeling far removed from the coffee plantations in El Salvador. But what happens to these birds when they take off for the winter to find their winter refuge in mid-elevated countries destroyed?

According to Kelsey Marshall, owner with wife Stacy of Poulsbo-based coffee roasting company Grounds for Change, the plight of migratory birds is often connected with shade-grown coffee farms because the farms’ biodiversity creates a flourishing habitat. Yet more than 150 species of birds have seen a 50 percent decline in population in the last two to three decades, following the deforestation brought by full-sun plantations.

“Shade-grown coffee affects us in the United States and especially in the Pacific Northwest,” Stacy Marshall says. “Songbirds rely on shade habitat to winter in and reproduce, and they come up here to spend the summers.”

The Audubon organization has recognized the important link, and has organized shade coffee campaigns.

“In the mid-elevations of Mexico, Central America, the Caribbean, and Colombia, most of the forests still standing are in traditional coffee plantations,” according to the Northwest Shade Coffee Campaign spearheaded by the Seattle Audubon. “These provide the last refuge for birds that have lost their habitat to the vast destruction of tropical forests.”

Even if your ears don’t appreciate bird chatter on an early morning while you’re coercing the brain to keep the eyelids shut, your taste buds will certainly appreciate the difference between “regular” coffee and the shade-grown or organic variety. Think of the difference in taste between a tree-ripened banana and one picked green and trucked thousands of miles. (If you’ve lived in Alaska, you know all about taste discrimination in produce.)

“In our opinion, there is a noticeable difference in organic and shade-grown coffee in terms of taste,” Stacy Marshall says. “The coffee bean does best when allowed to grow in its (eco) system and pace — you get a coffee bean that has grown to its full potential.”

For best results, coffee should not be stored in the freezer but at room temperature, according to Stacy Marshall. Keep it in an air-tight container, away from heat and sun. Freshly ground is best, and you should grind it according to the brewing method (for example, coffee that is ground too fine and used in a paper filter will taste bitter).

Marshall recommends using a coffee press to get the best flavor. Water should be hot but not boiling, and a coarser grind should be used. This is especially a good method when trying to distinguish between different coffees.

Marshall acknowledges there is lingering hesitation about quality related to organic coffee, but says compromised quality at the farms is no longer an issue. Grounds for Change, which roasts shade-grown, fair trade and organic certified beans, is certainly a testimony to increased interest in coffee with a conscience. The Marshalls founded their company about four years ago with the idea of being true to the triple bottom line: environmental, social and economic. Originally starting out in a 100-square-foot cottage on the couple’s property, the sustainable business has grown so much that not only did they move to a Poulsbo industrial park, they have expanded the facility and added a second roaster that tripled capacity.

Analyze the aroma. Try to detect the smell of fruity or floral notes such as berries, citrus or flowers. Note the presence of other aromas such as spice, nuts, chocolate, caramel, smoke, malt or wine.

Sip a small amount of coffee and move it over your entire tongue so that all your taste buds come in contact with it. Breathe in and out through your nose as you taste, slurping air in through the mouth over the coffee.

Swallow the coffee and note how long the flavors remain in your mouth after you’ve swallowed. This is an indication of body and can be described as full, thin, rich, rounded heavy or oily.

“People who hear about it (shade grown coffee) are immediately attracted to the idea,” Marshall says.

Grounds for Change walks its talk in many ways. It donates part of its sales to the Fair Trade Federation, the 1% For The Planet organization, and to local organizations, in addition to using sustainable practices such as renewable energy. 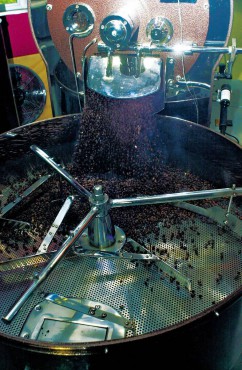 …And One for the Taste Buds

How do coffee roasters like this Poulsbo-based business make sure the coffee feels good not only to your scruples but also to your senses? They pay attention to details such as moisture content, bean density and other variations like elevation and seasonal changes — factors that are specific to the areas where the coffee beans grow.

“You can take a great bean and destroy it by overroasting,” Marshall says. “We pay attention to things like moisture content, bean density — those are related to specific areas where coffee is grown and variations like elevation and seasonal changes… You really have to understand how a bean will roast best.”

It’s a short window of opportunity: A batch only takes about 15 minutes to roast. “Coffee is a function of time and temperature,” Marshall says. “Time and temperature variations or subtleties like the amount of time between reaching the first crack and second crack (the sound made when pores open up) can create totally different roast profiles. A whole lot can happen in 15 minutes… It’s a very complex little bean.”

Tips on Proper Use of French Press

IMPORTANT: Do not let the coffee brew in the French press vessel for longer than 15 minutes or you will over-extract the coffee.

Set a timer at each brewing and once the 15 minutes is up, dispose of any remaining coffee.

The art of coffee roasting is very much like the art of wine making, and just as much a test of skill, technique and patience (to survive the continuous trial-and-error affair). Well-versed coffee connoisseurs are likely familiar with descriptors such as aroma, brightness, taste and body. For the average coffee drinker descriptions like earthy, smoky, floral and lively may be as elusive as Morse code, but for professionals like the Marshalls those are essential adjectives. And just like oenophiles live for wine tastings, discriminating coffee consumers depend on “cupping” — code word for “coffee tastings” (yes, there is a proper etiquette for it, too).

Coffee with a (Good) Attitude

A variety of coffee shops and cafés in West Sound serve up shade-grown, organic, and/or fair trade coffee. Below is a sampling of cafés. 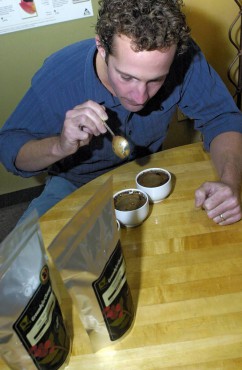 American coffee lovers make up an estimated one-third of the coffee market worldwide. While the popularity of this uplifting beverage has decreased in the United States compared to four decades ago (based on daily per capita consumption), estimates still show that about 50 percent of Americans drink coffee every day. The industry, too, woke up to smell the coffee: The number of coffee shops grew tenfold between 1987 and 2003.

One could only imagine how the world may change if all those Americans switched just their first cup of coffee every day to shade grown. If you go organic, shade grown, or fair trade (or better yet, all three), you, too, can help make the world a better place — one cup of java at a time. And next time you’re performing your ritualistic rendition of “I Feel Good… So Good…” you will feel good in so many new ways.