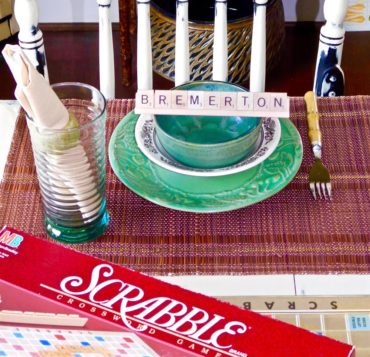 This isn’t my first rodeo, I mean Scrabble party. Over the years, I have had a few of the giddy, giggly get-together events.

One Scrabble gig was a yard party with some 20 folks and three game boards. We won’t do that again. Several mix couples parties were scheduled, but after a massive food buffet and a couple of beers, no one wanted to play the game.

The smaller, “girls” Scrabble parties worked out the best, but I wanted to include “small” with “big” and have an organized Sunday afternoon event. 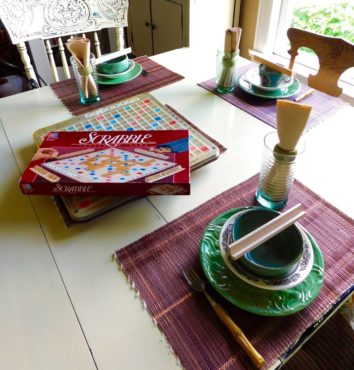 Designing for organized Scrabble, like an oxymoron of sort: who, where, what and when? Decided it would take place at our downtown Bremerton house. 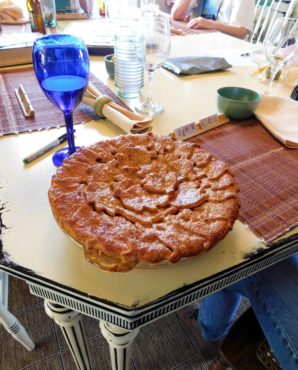 First step, opening up the existing dining table that could easily accommodate six or eight and make it Sunday at 2 p.m. so lunch or dinner would not be expected.

After putting leafs in to extend the creamy-beige table, it was time to make some color decisions. What would the color theme be for the table setting? Oh my, have you ever met me? Name a color or pattern, and I have the dishes.

After 10 years of writing articles about kitchen pots, pans, plates, glasses and Pyrex and after writing more than 10 color-study articles, I have dozens of boxes filled with photo-shoot props.

I wanted a setting where six folks would each have their tile holder; a water glass; a wine glass; three small, stacked dishes for progressive appetizers; and a napkin. 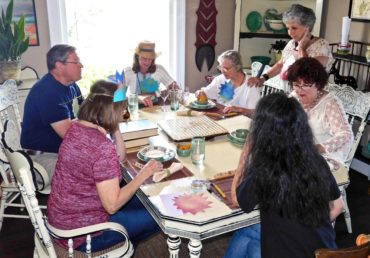 Bright and festive was my first thought. I stripped cupboards and boxes of all the blue I could find, from Pyrex glass plates to blue place-mats and everything in between. I love blue but hated this uncontrollable, runaway, vivid blue.

Then I introduced red, and then orange and green dishes were pulled out and scattered around, very pretty. But frustration was setting in — how could something so simple as a Scrabble party turn into something complex? 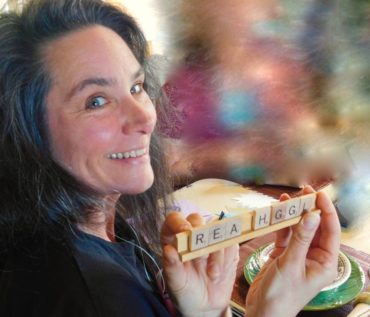 It came down to simplicity. Each setting would include a brown, mid-century place-mat made in Japan; a green Ohio Pottery underplate; a vintage, made in the U.S.A. Jeanette shallow bowl; a small, aqua WhaleTail Bowl by local potter Kate Bagwell; and a green water glass.

Then I was wondering whom to invite, and should there be a suggested donation for a local cause? Linda Ricci was the last party winner, so she agreed to be this year’s Scrabble queen bee, with any donations going to her favorite cause, Kitsap Humane Society.

Bremerton community neighborhood folks arrived, some not knowing each other, but all ready for the adventure. Two hadn’t ever played before; one person didn’t like the game and several opted to join my husband, Earl Sande, on the lower lawn grilling salmon. 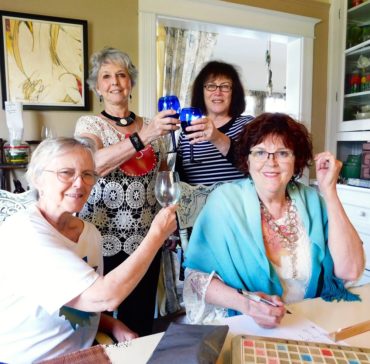 The six players were city councilperson Richard Huddy and wife Sabrina, ceramic artist Linda Ricci, Kris Day of London Maid Crumpets, community activist Margi Templeton and Clayworks owner Angela Perryman. Needless to say an interesting group, especially since I was the serving maid and Delores Weir was Scrabble judge even though she was not very familiar with the game.

The rest of the group mingled or helped Earl, grilling his recently caught salmon, which I later served separately drizzled with a line of secret ranch-tarter sauce.

Being the analytical observer, mental notes were piling up. Organized Scrabble was working out pretty good. That is, until I discovered that my Scrabble enthusiasts began cheating. Except they called it “changing the rules” — and all accepted the gaiety. 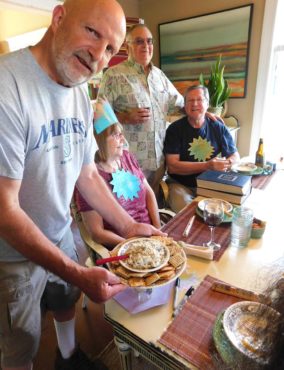 Not having an elaborate buffet and appetizer table worked out great. Personally serving the food kept players at the table with “word concentration.”

Not all went well. The words “next time” kept reoccurring in my mind, as I evaluated how things were going. The estimated two-hour party turned into four hours, and I could tell some were getting a bit antsy. 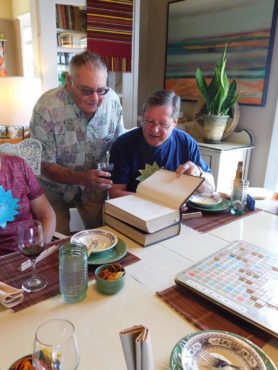 Six playing at one board was too much. And not having rules down was time consuming. Also, it was very fun and party-like having players not very familiar with the game, but avid, tested, competitive challengers might be more appropriate when donations are involved toward community services.

Next time, I will have four players at two tables, with two board games played and the total score of the two tables as the winner. Also if community fundraising is at stake, maybe there would be more support with competitive individual players. 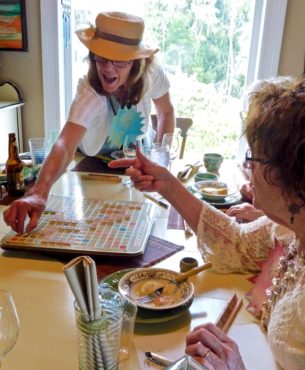 But then, getting too serious can be a party squelcher. We all definitely had fun. It was a Scrabble party, indeed.

Did I mention who won? Councilperson Richard Huddy handily won the first game, and even with desperate attempts against him, he won the entire package. He handed the donated monies over to Linda Ricci, last year’s champ, and happily the donation went to Kitsap Humane Society. 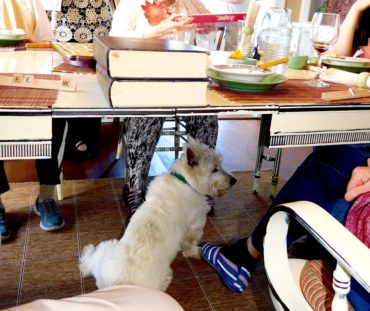 Next Scrabble game? Richard will name his community cause. Also some suggested that next time we use an official Scrabble dictionary and leave the obsolete 1959 Thelma Higbee dictionary in the closet.

I just smiled. Little do they know that I have yet to bring out the big ’40s dictionary, also acquired from the Higbee family. A history note: There was a Navy ship named after our Bremerton Higbee family.