The Alderbrook Resort and Spa 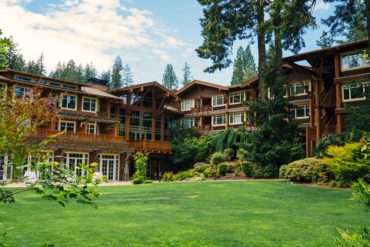 Located on Hood Canal, Alderbrook Resort features spacious guest rooms, a stellar marina, guest cottage accommodations, a luxurious day spa and a restaurant featuring some of the best food and wine in the region.

For more than a hundred years, the Alderbrook Resort in Union has been serving the West Puget Sound community. Most local residents have spent a night, have attended an event or have had dinner at the Alderbrook Resort. It is truly a part of the history of the community and continues to play a special role as a meeting venue and a place to reconnect with friends and family — and the beautiful, natural surroundings of Hood Canal.

The resort has a long history of serving the community. Beginning in 1913, before there was a road to the lodge, people arrived by boat. In the early years, the resort was owned and operated by Clara Eastwood and Eloise Flagg, who became known as the “Alderbrook Girls.”

Back then, the resort was a group of framed tents with wood fireplaces, which remained that way until after 1940, when the two women sold the property to the Schafer Timber Co., one of the largest timber companies in the world at that time. Schafer made the decision to build 21 new cottages, which are still part of the resort today. Some of the Schafer family continue to still have homes on Hood Canal.

In 1959, the Schafer Timber Co. sold Alderbrook to a local real estate developer, Wes Johnson, who greatly expanded the Alderbrook holdings by adding 93 rooms, a new golf course across the highway and residential lots on the golf course for development. Since that time, Alderbrook had other owners and the resort made few improvements over the years until 2001, when it was sold to the current owners, North Forty Lodging. 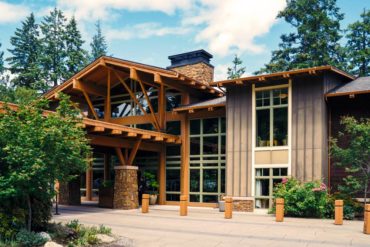 The new owners made the decision to create a world-class resort at Alderbrook and were willing to make the financial investment to accomplish that goal. Most observers would agree they have succeeded in that effort. Today, people from all over the world visit Alderbrook but most importantly, the business continues to serve the people who live in the Puget Sound region, particularly those who live and work in West Sound.

When you walk through the front door of the resort today, you might be greeted by the two cats, Alder and Brook, who tend to hang around the beautiful lobby with the large stone fireplace, big overstuffed chairs and a nice collection of books to read in this peaceful environment.

The resort’s beach is certified for oyster growing and Alderbrook serves its own oysters in the world-class restaurant. This year, Alderbrook is also growing its own blueberries, which you can eat over your oatmeal as you observe the view of the Olympic Mountains and beautiful Hood Canal.

The Alderbrook Resort today feels like a part of our community; it is rare to be there without running into someone you know. It is close enough — but far away enough — to allow visitors to remember the good things about their lives and to celebrate how lucky they are to live in this beautiful part of the world.