Heritage and Hospitality on Tap 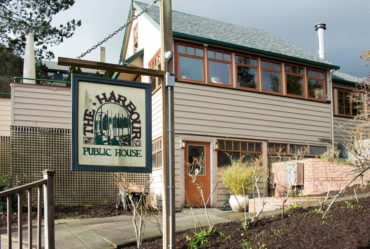 From coast to coast and around the world, food and the places that serve it are a big part of what makes a region unique. Maine has lobster shacks. In Philly, it’s cheesesteak joints. San Francisco gave the world chowder in a sourdough bowl, and New Orleans serves up mountains of beignet under an avalanche of powdered sugar at the Café Du Monde.

Some dining experiences are so firmly iconic to the locale, it’s hard to imagine one without the other. So where does one go to get a taste of the Kitsap Peninsula?

The Harbour Public House on Bainbridge Island is a good start. 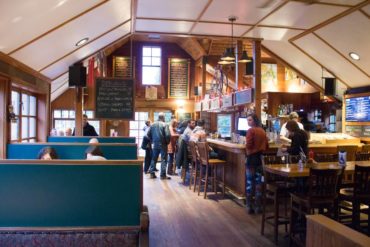 It’s a big responsibility to represent the culinary heart and soul of an entire county. Sure, it’s about the food, but it also requires a setting and a history authentic to the place. Jeff and Jocelyn Waite, owners and operators of the Harbour Public House (known locally as “the Pub”) as well as the adjoining Harbour Marina, are proud of their businesses’ past.

“The Pub has been here for 26 years, and we’ll be here for at least another 26,” Jeff Waite says with a smile.

Waite’s wife, originally Jocelyn Evans, is the daughter of Jim and Judy Evans, original proprietors and founders of the pub and marina. Jeff and Jocelyn Waite began their marriage on the deck of the Pub overlooking the marina.

Jim Evans, a professor at the University of Washington, was an early adopter of commuting by bicycle. His trusty bike is now on display above the Pub’s bar. He and Judy, a Bainbridge grade-school teacher, built the Public House in the footprint of the original waterfront home. The homesteaders, Ambrose and Amanda Grow, began construction of the house for their family in 1881.

By 1990, the building had seen better days. The hundred-year-old cedar foundation was rotting away. The Evans restored the building, raising the front two-story portion and reconstructing the basement. The original upper floor was retained as much as possible. The first-growth Douglas fir of the interior was repurposed as wainscoting, trim and cabinets. Upstairs floor joists became booth tables and the fireplace mantelpiece.

The Harbour Public House opened on Dec. 27, 1991. Just as in a traditional English public house, the Evans family lived there for several years.

In a nod to Bainbridge’s maritime past, the Pub displays photos of the shipbuilding Hall brothers and their crew of shipwrights, as well as reproductions of the mast flags of the Hall Brothers Shipyard. In 1881, the company — already known for 40 years as a builder of the finest sailing ships — brought its shipyard to Port Blakely.

The Harbour Public House occupies a rare waterfront setting for a Kitsap County restaurant. A huge outdoor deck, which doubles the Pub’s seating in summer, overlooks a 50-slip marina with complimentary moorage for waterbound patrons who wish to tie up and stop in for a bite. Inside the doors, diners are met by warm woods, padded booths and a pub bar.

The intimate effect is furthered by a fireplace, high ceiling and walls of windows. The single-room restaurant and bar is for age 21 and over at all times. The room is uncluttered by a kitchen, which is located on the ground floor — the food delivered via dumbwaiter. The Pub doesn’t take reservations, but use of the Nowait app allows the peckish and impatient to put their names on the waitlist before they arrive. 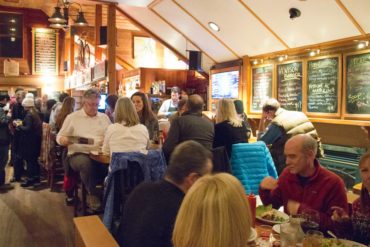 Finally, it’s time to eat. Once settled into a booth by the accommodating staff, guests are handed, um, a newspaper. Approximately four times a year, the Waites print a new menu for the upcoming season. Printed on newsprint, the menu takes up the backside of the page, while the front gives diners a short history of the establishment and articles on providers of the fresh and local fare for which the Pub is known. What could be more appropriate for a purveyor of English-style fish and chips than newspaper?

The fish and chips, voted Bainbridge’s favorite, is beer-battered Alaska Pacific cod served with hand-cut fries. It ranks as one of the Pub’s most celebrated offerings, along with clam chowder made to order and burgers from grass-fed Spanaway beef. The meat is never frozen, and the Pub grinds its hamburger in-house.

In addition to the regular menu offerings, there are five or six chalkboard specials each day. These may include such crowd-pleasers as bouillabaisse, ling cod sandwiches, buffalo burgers, seafood curry, pork grilled cheese and steak tostadas.

In 2002, Waite and chef Jeff McClelland, who was trained at the Culinary Institute of America, began converting the menu to locally grown and organic. By 2017, they had cultivated relationships with 47 farms, many within 6 miles of the Public House. In addition to Harlow Cattle Co. beef and year-round produce growers, the Public House serves organic chicken; Puget Sound shellfish; Bainbridge’s Pane d’Amore bread; Mt. Townsend Creamery cheeses; and Washington-made wines, brews, ciders and spirits.

Throughout the week, the Pub keeps it interesting. On Fridays from 4 to 7 p.m., the end of the workweek is celebrated with Slurpy Hour, that special time when freshly shucked, locally raised oysters cost $1 each. Sundays are enjoyed in traditional English fashion with roast beef and all the trimmings, served starting at 1 p.m. The Pub is also notable for the “non brunchy brunch.” Served from 10 a.m. to 10 p.m., this brunch-in-denial has special “brunch-inspired dishes” for those in “footy-pajamas” or otherwise.

Although the Pub is very much an Island establishment, its fame is by no means restricted to the eastern shore of Agate Pass. The Harbour Public House has been featured on the Pub Grub episode of “Food Paradise” on the Travel Channel. Gov. Jay Inslee and his wife, Trudi, are occasional guests, as are various local celebrities.

In one of the most beautiful spots on Earth, the Kitsap Peninsula, the food that reflects the way of life is fresh, local and seafood-rich. The setting must reflect the Northwest lifestyle: flannel with panache. The Harbour Public House brings it all together.