Canal Cookout an Adventure Outside the (Culinary) Box 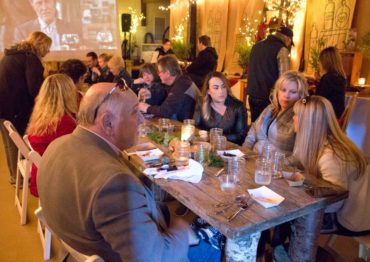 Named by Forbes Traveler magazine one of the “prettiest towns” in America, Union appeals to summer vacationers and visitors alike. The breathtaking views, natural beauty, slow pace and recreational activities more than compensate for the off-the-beaten-path destination.

“There’s this certain style — I call it canal style,” she says. “A little country, and a little farm and beachy.”

Growing up in Union, she’s learned to appreciate all that Hood Canal has to offer, including its rich bounty. Once a month, Leggett gets to show off this bounty — canal style — with the help of the chefs from Alderbrook Resort. 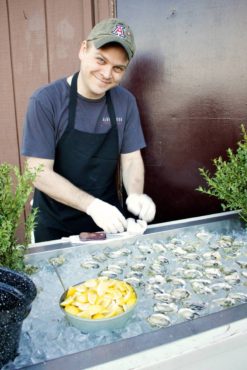 Called Canal Cookout, these farm-to-table, themed dinners are reminiscent of the communal dining of the days gone by. Long tables invite diners to make new friends and enjoy a conversation over fine food cooked on the open flame. 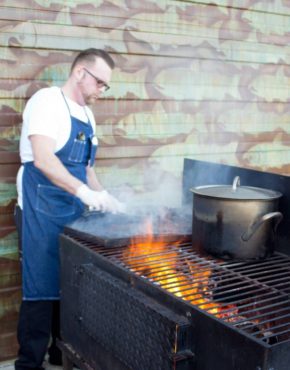 “I’m romantic about the idea of eating together,” Leggett says. “Food is a social event. I push people to dine together and meet each other.”

The cookouts are not just about social eating. The focus, of course, is the food — whatever happens to be in season in Hood Canal and at the local farms. Outside of the structured boundaries of the Alderbrook menu, the dishes for each Canal Cookout are created in the spur of the moment. It’s all about experimentation — both for chef and diners.

“I love the idea of getting people to eat outside of their culinary box, to experience new things,” Leggett says. 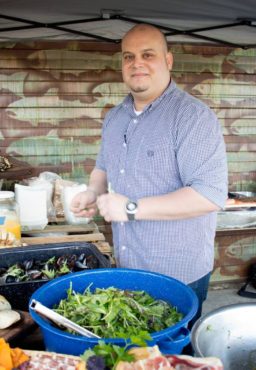 For executive chef Josh Delgado, the freedom to experiment and create means an opportunity “to get weird and do whatever we want.” He calls it every chef’s dream. 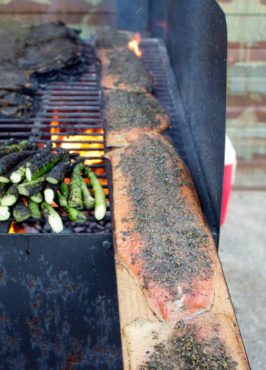 “We don’t really know what we’re doing until the day before or the day of, especially in the summer,” he says. “Lisa will get a bunch of stuff from the farms and we’ll show up and wing it freestyle. It’s ‘in-the-moment’ cooking.”

For May’s Northwest Paella theme, prawns were harvested from Hood Canal the day before the Thursday dinner while Leggett purchased mustard greens and herbs at Summer Hill Farms on Thursday.

When the weather’s transitioning between the seasons, Leggett doesn’t even decide until the last moment whether the dining will be indoors, inside the Hood Canal Marina’s warehouse, or outdoors, beachside by the marina. 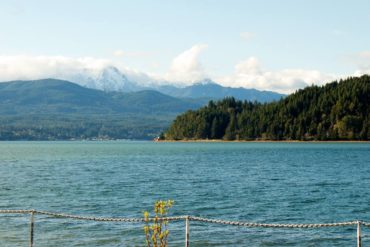 “It’s about the moment so if the sun is shining, we head outside and put up tables and a tent and start a fire,” she says. “Watching the sunset on the beach is always incredible.”

That was the case for the May cookout — after a dreary week, the sun came out just in time for the nearly 60 people who attended.

“It was a beautiful evening and we were able to head outside,” she says.

A Feast for all the Senses

Canal Cookouts are, essentially, like a block party with a unique aesthetic. For Leggett, it starts with the décor — something vintage, something floral, something unique. She may create tablescapes with the finds from her farm visit. She may bring out some vintage bikes. Or she may opt for one of her favorite themes, ’50s Northwest camping style. 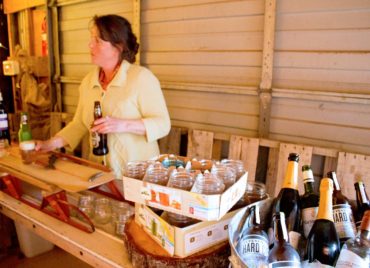 The party is not complete without music. Often, it’s live music by a local performer. During the winter, a silent film will play on the screen. An artist may be there painting or creating a sculpture.

“I’m trying to capture all the five senses,” Leggett says.

Elegant Food in a Casual Atmosphere

The atmosphere at the cookouts may be casual, but the food is what one may expect from a fine-dining restaurant.

Delgado sees the dinner a bit like a musical performance, with peaks following valleys.

“We don’t want just one note. You have something that’s in your face, really loud, and then you can do something more subdued, so not everything is the same intensity,” he says. “And even within the high and the low, there are different things you can touch — so instead of it being a crescendo, it goes up and down.” 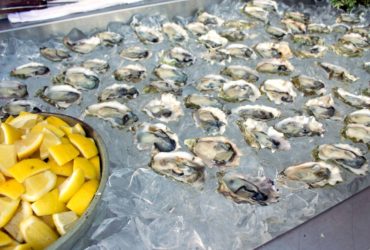 Unlike the more button-down atmosphere of Alderbrook, Canal Cookout gives diners the opportunity to interact with the chef while watching their food being cooked right before their eyes — on an open-flame grill.

“It’s very interactive,” Delgado says. “The thing we like so much about it is that it’s like you’re in somebody’s backyard. We get to show them what we’re doing, and a lot of people are curious about it. So there’s showmanship.”

A cheese-and-charcuterie platter and rosemary bread are the only staples at the cookouts. Everything else depends on the harvest — land and sea — and on each year’s farming season, which has its own variations. 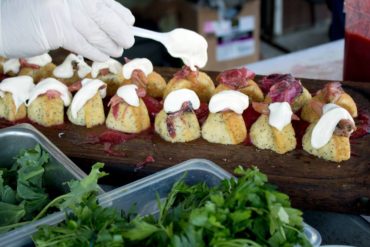 “We know it’s going to work,” Delgado says. “But there are some things we’ll never do again.”

The guests don’t seem to mind even the more unusual creations. Leggett says even the shy seem to come out of their comfort zone not only to socialize but to try new things.

“People get to eat things they don’t normally and they don’t question it,” she says. “It’s very relaxed and off the cuff, and I think more people embrace it that way.” 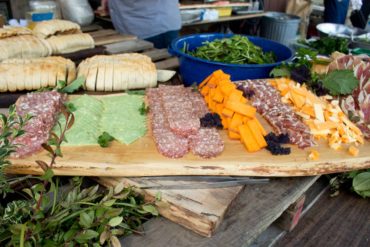 Now in its second year, the monthly Canal Cookout was an extension of Leggett’s vision for the Union City Market at the marina. She says she had a romantic idea of what a marina used to be like, back in the day, when the baker, the butcher, the fisherman and the candlemaker would all bring their goods. 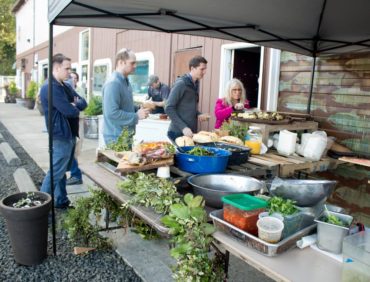 At $45 a person for the complete meal — dessert and drinks included — the price is a “steal,” Delgado notes. Add to that the gorgeous view and the sunsets, and it’s no surprise the summer cookouts attract an average of 100 people. But even the lower guest count of about 40 in the winter fills the inside of the marina to capacity.

What should guests expect when they show up for the two-hour cookout? Leggett says come with no expectations, then sit back and relax.

“Come with the eyes wide open,” Delgado advises. “I can almost guarantee they (the guests) have never done anything like this.”

For more information, go to unioncitymarket.com.