Fight Night is to a foodie what a fashion show is to a fashionista — but so much tastier!
July 20, 2015 - Featured, Food & Entertainment - Comments:
Text by Laureen Haydock-Lund

Are your ready for a fight?

Gig Harbor’s NetShed No. 9 has found a wildly successful formula with its organically grown Chef Fight Night (think “Top Chef” or “Chopped”), all while finding a way to utilize its beautiful waterfront facility in the evening after the normal breakfast and lunch restaurant closes for the day.

NetShed No. 9’s chef Will Rieck came up with the idea. And although the event happens randomly (that’s part of the charm), it sells out every time.

NetShed owners chef, Thad Lyman and Katie Doherty, loved Rieck’s idea and ran with it. They have created a unique and fun evening experience in historic downtown Gig Harbor that’s all about the “fight.” 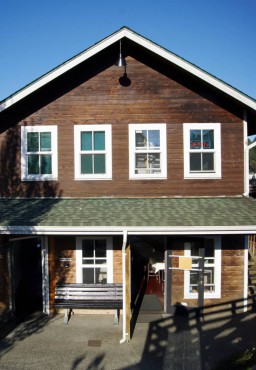 Approximately every six to eight weeks, two local chefs are recruited to compete against each other — but neither chef knows who the competition is. Guests are also in the dark until they arrive for the event at 6 p.m. It’s a surprise for everyone when the evening begins.

Similar to some of the cooking competition shows on TV, the chefs don’t know what the evening’s special ingredient will be until they arrive for prep.

“We ask them ahead of time what some of their favorite ingredients to cook with are,” Doherty explained. “Then we decide. Some of our previous battles have included Battle Beer, Battle Chocolate and Battle Star Fruit. ”

It may be a fight, but the chefs need to be uniquely collaborative to make three courses each in the tiny 10-by-18-foot kitchen. They have access to all ingredients in the NetShed’s pantry and are allowed to bring their own spice kits. One NetShed staff member assists with cleanup and finding things around the kitchen, but not cooking.

“They must make all three courses on their own for 26 guests,” Doherty said.

Guests pay $45 each to enjoy six courses (three from each chef). Fight Night dates are announced via the NetShed No. 9 Facebook page and tickets are sold online at a specific day and time, usually selling out in 15 minutes. Those lucky enough to score a ticket also get to judge the chefs and their courses.

Round one is called Money Talks and takes place in the kitchen, where the dueling chefs are working. Each guest is given a one-dollar bill on arrival. Chefs and guests are very engaged during this portion of the evening.

Guests ask questions, while each chef comments and teases, and much fun ensues — all while serious cooking is taking place. After watching the chefs cook and tasting both first courses, guests are asked to place the dollar bill in the jar next to the chef whose dish they liked the most.

Guests are also encouraged to stuff the ballot box with additional money in support of their favorite chef. At the end of round one, the chef with the most money is the winner. The winner gets the jar of money plus an additional $20, and the loser gets his or her jar of money as well.

Round two is called At the Mercy of the Judge. Guests start in the kitchen, watching the chefs, but then are seated in the dining area to enjoy the final product of the round. They use a scorecard to judge the round, giving points for flavor and appearance, kitchen prowess and creativity on a scale of one to five. The winner receives $50 at the end of the evening.

Round three is the Blind Course. Now guests sit back and enjoy each other’s company while the chefs are busy covertly creating the final course. Dishes are presented without the guests knowing which chef has created them and then are judged on flavor, appearance and creativity. The victor of this round also receives $50.

Throughout the event, Lyman (chef at NetShed’s sister restaurant, Brix 25) is narrating and keeping the conversation going among the guests and the chefs. Everyone is also enjoying no-host beverages, the gorgeous view and the company of their foodie comrades from the West Sound.

It’s a Fight Night, but everyone leaves happy. What more could you ask for on a weeknight in beautiful downtown Gig Harbor?

At April’s Fight Night, chef Tom Humbock of “Swing Wine Bar” in Olympia battled chef Mike Holbein of “Our Little Hole in the Wall” and “Our Table” in Olympia during Battle Lamb. Here is the menu they served: