The Boat Shed — Dining with a View 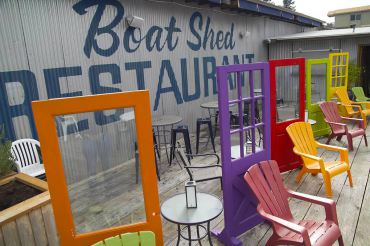 On warm summer days, there are few better places in West Sound to relax in the sun, enjoy a drink and grab a bite to eat than the Boat Shed restaurant in Bremerton. The eatery, nestled at the foot of the Manette side of the Manette Bridge, stands right at the water’s edge — and boasts one of the area’s largest outdoor waterfront decks.

Diners are offered unfettered views of the water, downtown Bremerton’s waterfront across the Port Washington Narrows, the bridge itself and, on truly clear days, the Olympic Mountains off in the distance. But you don’t have to sit outside to drink in the view with your meal, thanks to careful planning with the seating inside, as well as spacious windows all throughout the dining area and the bar. 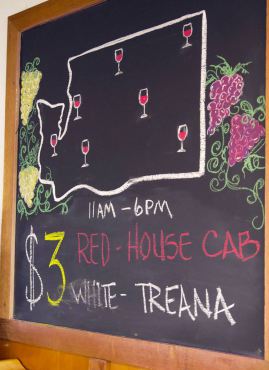 Restaurant co-owner Brett Hayfield bought the business in 1979, and it’s been a long evolution to create the popular waterfront destination it is today. 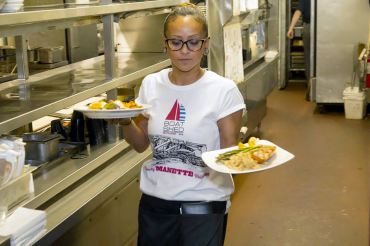 “Brett originally sold gas and bait on the dock and sold sandwiches,” says the Boat Shed’s general manager and co-owner, Kathy Davis-Hayfield. “From sandwiches, it went to burgers, then to pasta, then to seafood. And we still have a lot more potential.”

The couple also own the Yacht Club Broiler in Silverdale. 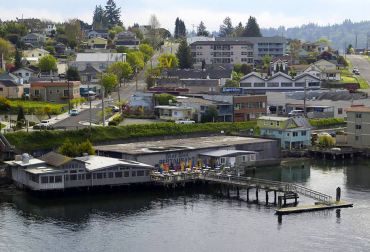 Beverly Hayfield, Brett’s former wife, was the sole owner of the Boat Shed in 2004, when a devastating fire gutted the kitchen, causing extensive damage to the restaurant.

“We were the first ones she called,” Davis-Hayfield remembers. “We thought someone had died.”

“But,” she continues, “as scary as it was for everyone, it turned out to be the biggest blessing.”

Rebuilding after the fire made it possible to recreate the interior of the restaurant while also updating and modernizing the structure, which would not have been possible otherwise. 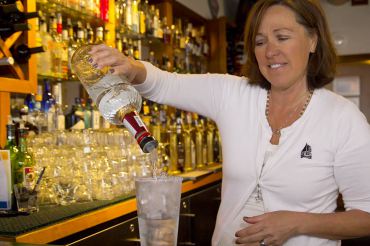 “The design is the same, but everything is new,” Davis-Hayfield says.

That design features a generous use of skylights, which create an open and airy feeling. Heavy beams across the ceiling and rough-hewn hardwood flooring give the space a rustic-chic feel and offer homage to the building’s authentic boat-shed roots. During the day, light floods the restaurant from the skylights above and at night, the space feels warm and friendly, like a welcoming waterfront cabin. 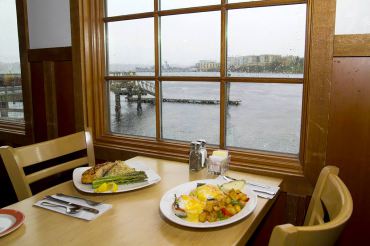 Just past the restaurant’s well-appointed bar, you’ll find the waterfront deck, which offers seating for up to 200 people — perhaps the most outdoor restaurant seating available in the area, and one reason why the Boat Shed is considered by many to be their go-to summer dining destination. A short dock runs out from the deck to a moorage, where boaters are welcome to tie up and come ashore for relaxation and refreshment.

In keeping with its waterfront locale, the Boat Shed’s entrees focus primarily on sea food, and salmon is a staple on the menu. However, the menu options are broad and have a wide appeal, from happy hour favorites like nachos and wings to entrée salads and pasta dishes. On Saturday and Sunday, there are brunch specials available, which may vary from week to week. 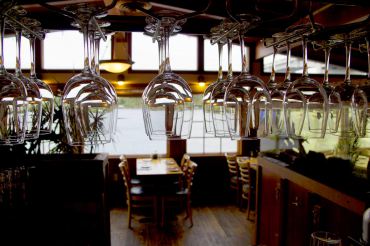 “We change the menu about twice a year,” Davis-Hayfield says. “And that could mean three things change, or that we might take 10 things off, if it seems like they aren’t working.”

The restaurant’s reputation is excellent when it comes to the quality of the food. The reasonable pricing — meals range from $10 to $30 — means you don’t have to wait for a special occasion to enjoy the food or the atmosphere.

Traffic-pattern changes that accompanied the new Manette Bridge lost the Boat Shed some of its curb appeal — you used to be able to turn right off the bridge and be at the door in just a few feet — and makes the Boat Shed a little harder to get to than in days past. But the new route to the restaurant is easy to navigate. The parking has also improved recently with the reopening of the upper parking lot. Depending on the time of day you visit, street parking is also available. 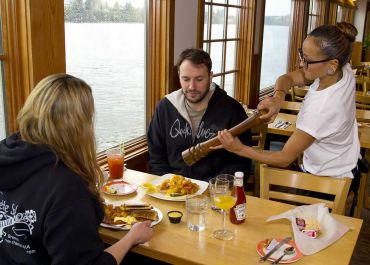 Unless it’s early in the day, your best bet is to park in that upper lot or along the road and take the flight of stairs down to the restaurant’s front door. The lower lot adjacent to the restaurant itself is small and fills up quickly, and can be a bit of a challenge to turn around in if you drive down and find it full.

Recently, Davis-Hayfield converted the warehouse building next to the restaurant into an event space, and she has plans to improve it further so that in the future it could serve as a venue for public events like music performances, movie screenings and other gatherings.

An anchor of the Manette neighborhood for more than three decades, the Boat Shed and its owners have become advocates for the area.

Among other work, Davis-Hayfield was instrumental in starting Music in Manette, free music performances in the small park at the top of the Boat Shed’s stairs. She mentors high school students and the restaurant participates in an internship program with Olympic College.

“We don’t think of ourselves as just a restaurant,” Davis-Hayfield says. “We’re part of this community.” 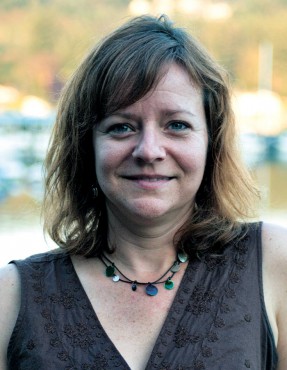 A Kitsap-based writer who has been writing professionally for more than 15 years on topics ranging from technology to health and wellness. Owner of Hallam Creative Services, she has a long history of working with words. Maura first became seriously interested in writing as a career when she won the prestigious New England Council of... (see more by Maura Kate Hallam)