Home Wasn’t Built in a Day

A Family with Roots that Run Deep
March 14, 2016 - Featured, The Home - Comments:
Text by Wendy Tweten Photography by Tom Woltjer 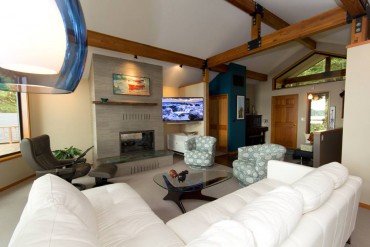 If Jerry and Mary Richards of Indianola were to have a clan motto emblazoned above their hearth, it would read, simply: “For Home and Family.”

While not actually carved in concrete, the sentiment is obvious in nearly every aspect of the couple’s story, which revolves around their home of 27 years. In 1989, Mary and Jerry contracted for the home to be built on Richards family land, which had been acquired by Jerry’s parents in the 1940s. With Jerry’s mom and dad living right across the road from their son’s new house, the move cemented the family’s generational stake in the little town.

Jerry is, in fact, the third generation of his family to make a home in Indianola. His grandparents, Ambrose and Beth Richards, bought a summer cabin one block from the Indianola store in 1926. In 1942, at the height of World War II, they passed the cabin along to their son, Ray, and his new wife, Peg. The young couple made the cabin their home and had just begun their family when Ray was called up to serve in the U.S. Navy.

As the years rolled on and the war ended, Ray returned home, and the couple continued their postwar effort to contribute babies to the “boomer” generation. They purchased waterfront just down the road from the cabin for their “forever home” and added the half-acre lot on the other side of Shore Drive. 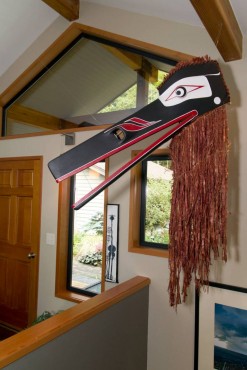 For 72 years, Jerry’s mother called Indianola home. When she died in November 2015, the town mourned a lost icon — a woman as much a part of the town as the dock and summer sand castles.

Jerry and his siblings grew up in Indianola at a time when the population swelled each June with the arrival of the summer-house crowd. The Richards children, being locals, roamed the woods and beaches of Indianola in all seasons. These adventures built in Jerry an affection for his hometown that brought him and his bride, Mary, to Indianola to set up housekeeping at the end of college and four years on the East Coast.

Upon purchasing the property from Jerry’s brother, the young couple faced the challenge of choosing a floorplan. To help with the decision, they turned to Rob Thomas of Thomas Construction. The result was a comfy, custom-built, two-level residence of 1,650 square feet at each level. Both floors take full advantage of a dazzling view of Puget Sound and Mount Rainier, as seen over Jerry’s ancestral home. 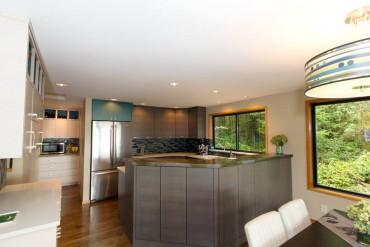 Over the next quarter of a century, the couple did a lot of living in and from their home base. They had two children. They filled their house with antiques, calico and oak. Jerry retired from a job in civil service, then started a second career. Mary ran her popular, portable espresso stand at events across the north end of Kitsap County and became an equally popular Realtor with Windermere in Poulsbo. Throughout it all, they never lost sight of what really mattered.

“Mostly we raised our kids and had a lot of fun,” Jerry reminisces. 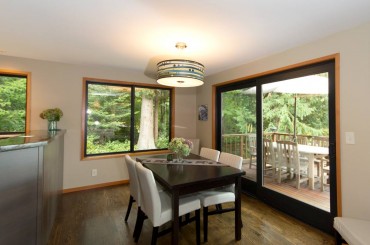 Time flew while they were having fun, and eventually the pair woke up to find themselves empty nesters in a home that felt out of date. It was time for the calico to go.

“We realized our tastes are markedly different from what they were in the 1980s,” Mary says.

They decided to renovate. But would redecorating be enough? The Richardses turned once again to their trusted contractor Thomas for structural work. They also turned to their friend, Connie LaMont, interior designer and owner of LaMont Design. In 1993, LaMont came into their lives as a color-savvy referee when Mary and Jerry Richards couldn’t agree on paint for the bathroom. 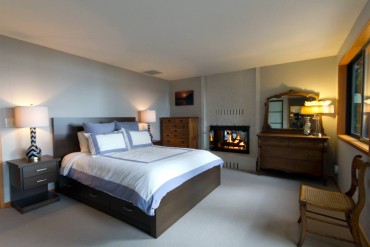 So the remodel began with Thomas and LaMont providing expert advice every step of the way. The Richardses decided to remodel the main floor only. During construction, they would live on the ground-floor level — a comfortable and fully self-contained unit with a water view.

The work began in September 2013 and ended six months later. So thorough was the remodel, it took longer than the original construction, which was completed in four months. No major structural changes were required, although at one point only the upstairs walls were standing. The couple had been wise — or lucky — in their choice of the original design. 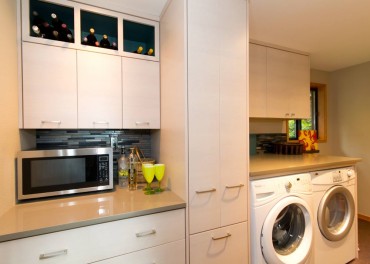 “By accident, we built a house with a desirable floorplan,” says Mary, a Realtor who knows homes. “For one thing, everything we need is on one main level.”

The footprint remained the same. A few doors were removed; the fine oak flooring would be darkened and refinished. The prow window wall and exposed beam ceiling would be freshened up.

With the home’s bones in good hands, it was time to see to the interior detail. And LaMont was just the woman for the job.

“We surrendered artistic control,” Jerry says with a smile.

Mary agrees. “We couldn’t have thought of all this,” she says, indicating the tailored rooms that now make up her home. “It takes someone qualified to be the quarterback.” 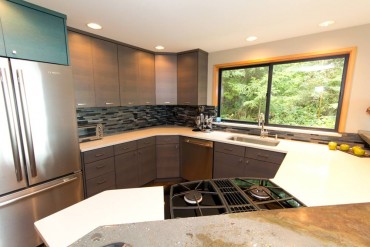 “Design is like music,” LaMont contends. “A few notes may not mean much; you have to hear the whole song.”

Lighting was entirely revamped. A double-sided gas fireplace appeared between the living room and master bedroom. The home’s original 10 or more colors were reduced to five. LaMont’s goal was a cohesive template that extended from room to room, delivering the house as a whole. The theme was wet sand, beach glass and deep turquoise — the latter the birthstone of both Mary and Jerry. The result is sleek and modern, yet cozy as a warm blanket. 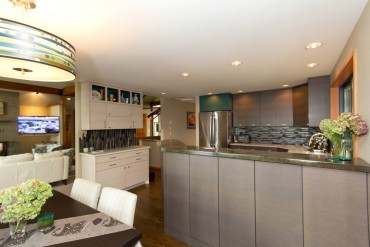 The kitchen received special consideration. A bar-height counter was set with a personalized, poured-concrete countertop. The counter and a matching hearth, poured by Laurie Smith of Advanced Concrete Artisans, are not only a visual continuation of the beach but a time capsule of Richard family memories.

Members of the family contributed agates, shells, fossils and driftwood that were set within the beach-sand base. Certain shells were highlighted, and a few of the hand-placed nodule rock slices are underlit. Metal shavings were added for an understated sparkle. The agates were a hobby of Jerry’s mother, who collected and polished stones from the Indianola beach throughout her life.

The icing on the kitchen cake is a mosaic of vertically placed glass tile that composes a cityscape with a “search and find” Space Needle. The Seattle icon is a favorite of Mary’s. The linear tile is one incarnation of a kitchen defined by horizontal and vertical lines and controlled asymmetry.

In its new incarnation, the kitchen has become a pleasant place to hang out with friends lined up along the counter. The Richardses give credit for the beautiful, thoughtful tile work found throughout the house to Conrad Matlock of CAM Construction.

In the Richards home, art is personal. Both Jerry and Mary are photographers. Trips to Senegal and Tanzania to visit their daughter, who served three years in the Peace Corps, provided plenty of opportunities for shots of wildlife and colorfully dressed women. These trips are handsomely captured and framed on the walls. Jerry’s gallery-quality photos from a recent Hawaiian vacation are displayed on the family’s television like a mutable picture.

The photos are joined by water-garden paintings from the brush of Indianola artist Sydni Sterling. Perhaps the most striking artwork, however, is the Northwest Native American hamatsa-style raven mask carved by Jerry himself. The admirable piece hails back to an anthropology class at the University of Washington and — as he became interested in the subject — a course in carving.

Jerry and Mary Richards have picked up the hometown torch carried for so long by Jerry’s parents. Their son and daughter are the fourth generation of Richardses to jump off the dock and spend lazy summers on the beach. Coming home to Indianola was the best move the couple could have made.

“I didn’t see any better community anywhere,” Jerry says. “I watched my mother live her life here with friendship, support and great groups of people. It’s a rich life.”