The Mystery of ‘Potato Hollow Heart’

I love a good mystery, and the garden provides many puzzles. Sometimes I am stumped, but it sure is satisfying when the solution presents itself!

Last spring, I decided to make use of some rotting pallets we had set aside. The wood was pretty far-gone, and I thought I could bury it under some compost in an area of my vegetable garden that had resisted most of my efforts to improve the soil.

My garden is glacial till and there are very distinct zones of soil texture and composition running through the yard. The area I decided to try to improve with the rotting pallets is quite sandy, and most of the amendments seemed to disappear despite being under cultivation for 17 years. (To check on the safety on any pallets you may want to use, see the code stamped on the wood.) 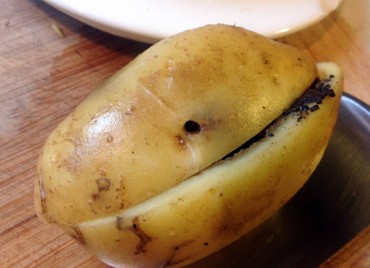 I broke up the pallets, removed all nails and piled the wood about 6 inches thick over the poor soil in the vegetable bed. The area was covered by a 4-inch layer of compost and worm castings, and was watered by a drip irrigation system.

I decided to plant some sugar snap peas and broccoli, and waited to see how my mini hugelkultur bed would do.

Some volunteer potatoes poked their heads through all the wood, finding their way to the sun.

All the crops did well, and the potato crop I harvested from that bed was the healthiest I had ever had. The tubers were large and healthy and I was thrilled to have this unplanned bonus crop.

I had saved the best of the bounty for a birthday dinner and as I cut into one of the potatoes, I discovered the insides to be completely converted into compost!

I had never seen anything like this, with the outside 1/8-inch of the potato healthy, other than a small entry hole, and the inside completely broken down. I could not find a reasonable answer to the puzzle.

The access hole could have been made by a wireworm but the damage was not typical wireworm damage. An earthworm was inside the tuber but I did not think it could have caused the entry hole. I was not satisfied, and kept hoping to find a better answer.

A week later, as I prepared dinner and decided to use more of my potatoes, I cut into one of the larger tubers and discovered a hollow center but no entry hole and no worms. The outer 1/8-inch was healthy, the inside partially hollow.

This potato suffered from a physiological disorder called potato hollow heart. Caused by rapid growth after a period of stress in some varieties of potatoes, the interior of the potato is pulled apart. What is left of the potato is still edible but in my case, there was very little left.

Mystery solved! In the rich, decomposed wood/compost medium, the volunteer potatoes grew rapidly after having spent the winter in cold soil (a period of stress). Some of the tubers developed the physiological anomaly known as hollow heart, and some of these potatoes were invaded by wireworms or earthworms that feasted on the interior of the potatoes in complete safety.

The owner of Harmonia Landscapes on Bainbridge Island, Luba Fetterman is an ecoPRO certified horticulturist. Whether designing a garden, teaching clients how to care for their own landscapes, or providing fine pruning or maintenance services, Luba's focus is on gardens that nurture people while remaining in harmony with the natural world. She has a bachelor... (see more by Luba Fetterman)