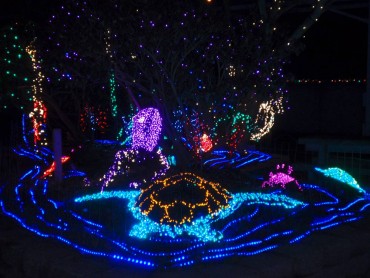 A not-to-be-missed holiday-season outing is the Kingston Lights on the green spaces surrounding the Port of Kingston building near the ferry terminal. It all begins on Saturday, Dec. 5, at 5 p.m. when Santa arrives on a North Kitsap Fire and Rescue truck. Santa lights the Christmas tree and flips the switch to turn on all the light displays.

Nancy Martin with the Kingston Chamber of Commerce recommends getting there at or before 4 p.m.

“People start gathering at the port an hour before Santa arrives. They stand around the bonfires and enjoy the music provided by the Jingle Jam Band,” she says. “Cookies, hot chocolate and coffee are served to the crowd while they wait for Santa to arrive. There is a wine bar sponsored by the Kingston Chamber of Commerce to put adults into the holiday spirit. It really is a fun event and we attract people from all over the Kitsap Peninsula, not just Kingstonites.” 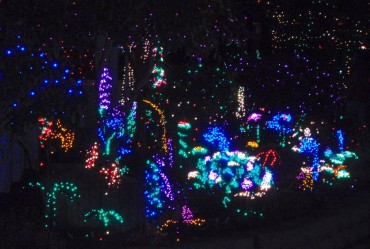 This crowd-pleasing event started six years ago with an idea from Tom Coltas, one of the port commissioners, who brought the idea to the other commissioners. They enthusiastically endorsed it.

Kori Henry and Ray Carpenter (port employee) took the approval and ran with it. Henry went to the local garden clubs and community groups selling the idea and enlisting helpers.

Henry and Carpenter took classes on how to construct each lighted display and then the fun began as they enlisted more and more help along the way and taught volunteers how to make the displays. Each year, the group of volunteers visits the Bellevue Botanic Gardens lighted displays for additional inspiration and for gathering new tips about the lighting. 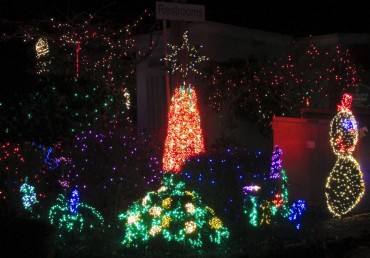 How It Has Evolved

Originally extension cords were strung from display to display but as the displays started taking up more and more space and became more and more creative, Port of Kingston staff dug trenches and installed underground conduit to support all the places they needed to plug in the displays. It was also a safety measure.

Regular holiday lights were used the first year but they were too hot and had to be continuously replaced. Now LED lights are used and both the lights and the materials are purchased through a supplier that specializes in community holiday light displays. 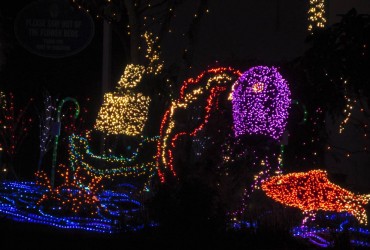 Steve Von Marenholz makes all the bent rebar forms that the team of volunteers covers with bundles of LED lights. The forms are his idea and creation, with some input from the volunteers.

He also dips each form he’s made into a dark-green, plasticized coating material. At first, they wrapped the rebar with green florist tape but soon realized it deteriorated too quickly. Later, Von Marenholz came up with the green coating for the rebar.

“The volunteers come up with the ideas and Ray creates it. He can do anything and finds ways to improve the designs,” says port Executive Director David Malone. 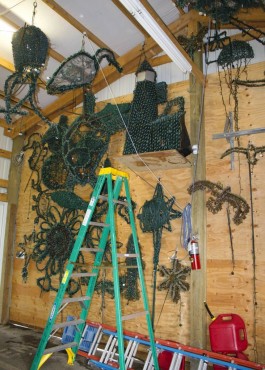 At the end of 2014, the volunteers estimated the count of individual lights at around 250,000 (or more). Plus an additional 8,000 lights for the Christmas tree. Each year, the port sets aside $5,000 in the budget specifically for the Kingston Lights. 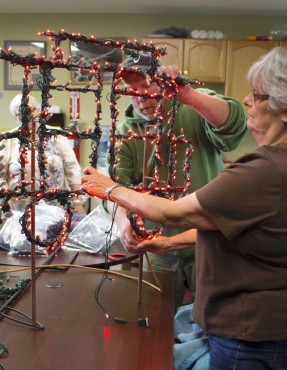 Volunteers and the Beautification Committee

One of the volunteers is a member of the Kingston Beautification Committee but others are from all over the north end of the county and two women who created the lighted turtle came from Port Orchard. Most of the volunteers have remained on the committee for five or more years.

“Without volunteers, we wouldn’t have a display,” says Christine Conners, port assistant.

Hollace Vaughan, who’s been volunteering since the beginning, says, “We’re like a quilting bee, only with lights.” 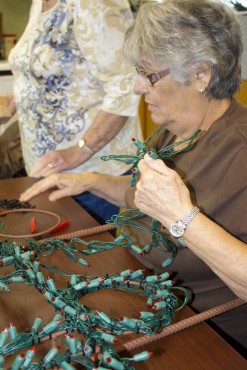 The group begins planning in March of each year and they meet every other Friday to bundle and attach the lights to the rebar forms. During October and November, they meet every Friday. Sometimes they have instruction sheets on how to put the display together but other times they brainstorm their idea to create something and Carpenter figures out how to build it. 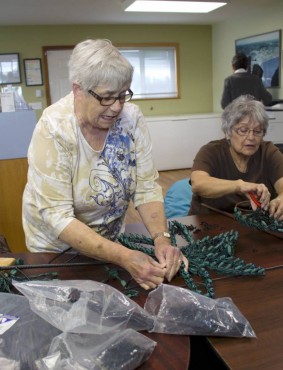 “We can only get certain colors of lights from the supplier, so we’re sometimes limited in our creativity,” Conners says.

There are no rules on creativity and ideas but the group said in unison at a recent work party, “No red hot pokers!” Apparently making those flowers was a logistics nightmare. They never want to make them again.

Bob Helbock, Von Marenholtz and Carpenter (who is indispensable as the “how-to” guy and artistic director) spend two weeks each year to get it all set up and installed. A map of the layout is created and updated. They try to change it up each year to keep it interesting. Plus new creations are always being added. 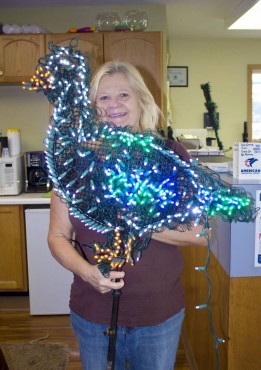 When it’s all over, everything is stored in a shed at the port. At last count, before this year’s creations took shape, there were at least 50 big animals, abundant flowers (small, medium and large), numerous smaller creations and at least 400 strings of lights. Some of the forms are hung along the walls of the shed, others are stored in bins. 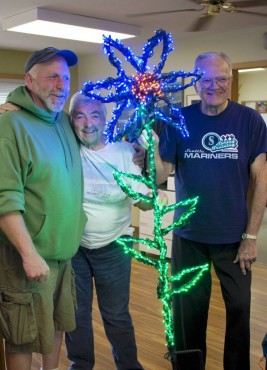 Every light string is checked before, after and during wrapping around the rebar. Then checked before going into storage and again when it comes out of storage. It’s a ritual to test all the lights again and again during assembly and throughout setting up and taking down the displays.

Creating one of the large flowers seen in the displays takes about eight hours of bundling, wrapping and zip-tying the bundled strands onto the form. Anyone who’d like to learn how to put together a light display is welcome to join the group on one of the scheduled Fridays. Visit the Port of Kingston website calendar or give Conners a call to confirm the date and time. 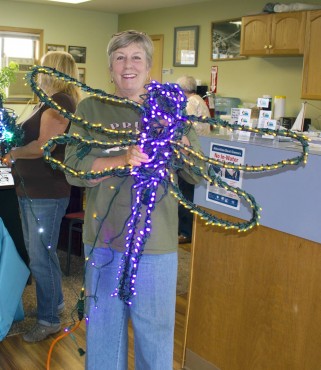 Flowers are a big theme. Three hanging fuchsia baskets are made with 70 strands of lights for each basket. Poinsettias, hollyhocks and, of course, red hot pokers can be found. Kids delight in the train, snowman, octopus, giant turtle, peacock, crabs, lighthouse and Viking ships. One area has a floral theme, another has sea creatures and even the fueling dock is decorated in lights. Pathways are lined in lights and any space that needs decorative lighting has it.

A giant teddy bear is in the works. The volunteers were hoping to have it completed this year. You’ll have to go see Kingston Lights to find out if they succeeded.

Free to the Public

If you attend the event with children, be sure to participate in the scavenger hunt and stop for refreshments. The best time to take photos is just at twilight.

Boaters fill up the marina each year at this time just to see the lights. Parking is free in many areas surrounding the port. Some attendees bring picnic dinners with them. The lights are on every night during December.

The best part other than the light displays is that it’s all free.