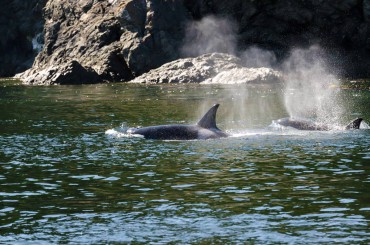 Orcas have always played a significant role in Puget Sound, with cultural significance ranging back thousands of years. As apex predators, they are crucial to the local ecosystem, and they also assist the regional economy by bringing in tourism.

These creatures have many layers of significance in this region, and those who live in the area know that seeing an orca is a pretty spectacular sight.

Recently, another calf was born into the population of orcas that reside in the Puget Sound, known as the Southern Resident Killer Whales (SRKW). The SRKW population is currently made up of 83 individuals, and each individual is a member of one of three distinct pods — J, K, and L pod.

All three pods inhabit the Salish Sea for most of the year and thus, these whales are also known as “resident orcas.” “Transient orcas” also can be seen in the Salish Sea, but they live a more nomadic lifestyle, migrating up and down the west coast each year.

Resident orcas eat salmon almost exclusively, devouring Chinook and chum in particular, with the occasional steelhead or squid thrown in. Transients, however, primarily eat marine mammals, such as harbor seals and porpoises.

Along with their diet, resident and transient orcas differ in their pod organization: While resident whales will normally stick together in fairly large pods, transients have a much less structured social life.

Generally, transients will swim around in groups with two to six individuals, and their bonds are much less stronger; transient orcas sometimes separate from the group and wander, occasionally forming new, temporary groups along the way.

Unlike the transients, the SRKW population is currently classified as endangered; their historic population of 200 individuals has been reduced to 83.

Several environmental factors affect these orca’s health. They include declining salmon populations and lack of breeding with outside groups (males will breed with different pods to prevent inbreeding), as well as human impacts such as water pollution from toxic materials and harmful interactions with boats and SONAR vessels.

With this reduction in population, it is always a relief to see a new orca being born. While orcas have a mortality rate of up to 50 percent for the first seven years of life, the sighting of J53 on Oct. 24, in addition to the five other births this year, has raised some hope that these fantastic cetaceans can make a comeback.

We can continue to work to make Puget Sound a clean, healthy environment for these new orca calves!

Alec George is a former intern for Harbor WildWatch, helping teach about the wildlife of Puget Sound and the surrounding waters to the community. He graduated from Central Washington University, and having spent much of his free time on the local rivers, decided to pursue a career involving aquatic and marine wildlife. He enjoys flyfishing, rock climbing, camping and many other outdoor activities.
Tags: northwest, outdoors, puget sound, things to do, water, wildlife