A Home for Communing With Nature 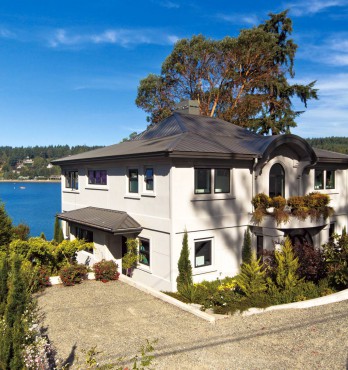 It’s been said that in a well-ordered universe, camping would take place indoors. Now that’s brilliant.

Imagine days of relaxation rather than housekeeping. Waves slap the shore as the stars come out. Wildlife is at your doorstep. Best of all, the plumbing is modern and there are no rocks under the mattress. That’s what happens when indoors meets outdoors — and falls in love.

As it turns out, it’s been done.

One visionary homeowner on Bainbridge Island brought the best of life in a tent to her home. She took the idea to heart in a big way. As she sketched out the architectural design for her new home to be built near Lynwood Center, she let nature, simplicity and ease of maintenance guide her hand. The result is a sophisticated dwelling that lives so lightly, it’s like the crème de la camping. 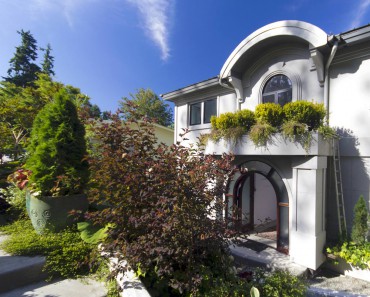 There is, however, no “roughing it” within these walls. The homeowner incorporated sapele mahogany on ceilings, stair treads and in a bed that was custom-built by a local craftsman. Verde borgogna slab granite crowns the kitchen cabinetry. Dedicated recesses backlight her artwork. A 32-inch-deep soaking tub comes with a view and serves both the master and guest suites.

The homeowner’s adventure in architecture began with the purchase of a pocket-sized piece of land she’d long admired. In her 20 years of vacations on Bainbridge, she’d regularly visited the property and had come to know the owner of the small waterfront jewel as “the plant lady.” During one of those frequent shopping trips to this charming cottage nursery, she learned that the lot would be coming to market, put in an offer — and was soon planning her dream home. 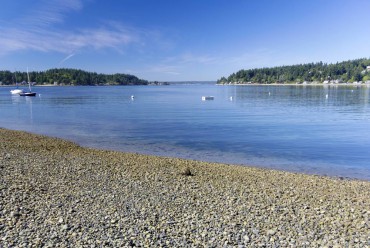 Next, the new homeowner had to deal with the naysayers.

“They told me, ‘You can’t build on such a small lot,'” she recalls.

But they didn’t reckon on a determined woman, who not only got the permitting for her 64-by-64-foot property but also began to design the home herself. Although not a trained architect, she has the ability, as she says, to see three-dimensionally. Her talent of walking through a house in her imagination had long allowed her to sketch out floorplans for friends.

Now it was her turn. The first consideration would be the Puget Sound view: a southwestern symphony of ferryboats, orca whales, ospreys, sunsets and the occasional submarine. She also wanted to pay homage to the tiled, enclosable “Florida rooms” of her youth. 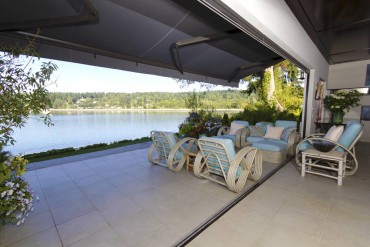 These two elements dovetail nicely, with the veranda-like rooms running the full length of the view wall on both stories. In the summer, they’re open to the sound of the waves. Birds flutter in and out freely. In the winter, the rooms are closed to the elements — though still open to the view — by NanaWall glass bifold doors and windows. A remote-controlled awning turns the ground-floor room into a shady patio on bright summer evenings.

The resulting 3,200-square-foot house is symmetrical and has high ceilings, along with a separate suite for visitors. Nearly every room has a view, owing to a compressed floorplan devoid of hallways. Outside, the gutters were skipped, replaced with an unconventional and ecological system of broad-roof overhangs from which rainwater falls naturally onto thick runs of gravel. 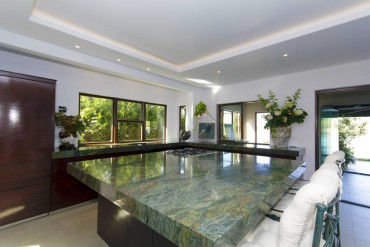 Rather than the usual wood-based siding with its insistence on cleaning and painting, the homeowner chose stucco. Not only is stucco virtually maintenance-free, it provides passive-solar heating to her home.

“The interior never changes temperature,” she says. “The stucco also makes it very quiet. The house is so well insulated, there’s no road noise. All you hear is the splash of the water against the shore.”

In case the home does need a bit of extra heat, she added a gas fireplace. Not only is the fireplace necessary during the occasional Island outage, it provides the cozy campfire that every civilized version of a tent needs. 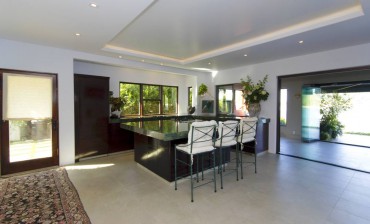 The homeowner had other themes in mind: She wanted her home to be uncluttered and low maintenance. Clean lines and wide-open spaces on the main floor are maintained by a minimum of distractions. She allows no hanging lights to dangle between her and the view. Cabinetry is devoid of hardware. All walls are white and trim is nonexistent.

Many of the features were chosen to make cleaning as simple as possible. Toilets are wall-hung. There are no elevation changes on the upper and lower levels, allowing a Roomba to wander unhindered. In the kitchen, the faucet is set low within a rubber sink. 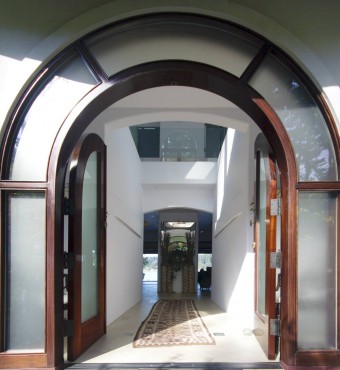 The final piece of this outdoorsy opus is found in the animals that surround the property. The animals are never begrudged, even when they pummel her landscape.

“There are coyotes, herons and deer,” she says. “The deer use my garden as food but that’s OK; they come first. At night, I hear them walking on the gravel under the eaves. If they eat a plant, I just try a different plant.”

Among the plants she prefers are those that attract hummingbirds. Out of concern for them and considering that her southwest walls are open for much of the summer, she chose aqua as a complement to the white walls and eschews red in any form to avoid tempting the little birds in.

Other birds have made themselves at home here. Most notable is a personable crow that first appeared when the house was under construction. The canny bird shows up when the homeowner relaxes on the patio, and sometimes follows her into Lynwood. She’s noticed he seems more curious than hungry. 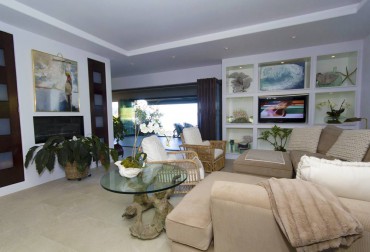 No wonder the crow is smitten, considering this nature lover has begun purchasing Chinese takeout boxes into which she puts a little prize for the bird. The crow is thoroughly amused working out the puzzle. The homeowner suspects she may be the crow’s pet human.

In the two and half years since moving into her beachside retreat, she continues to be surprised and delighted daily by a home she views as heaven.

“Every morning, I wake to the sound of waves,” she says with a smile. “I appreciate every second of the day.”